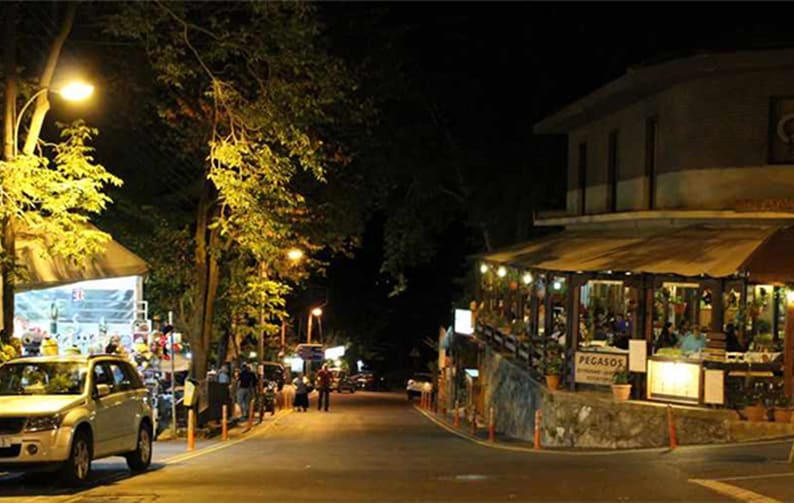 Platres on an August night, the only time of the year the hotels are fully booked

A Limassol-based economist has sent out an SOS for the survival of Platres, saying almost all of its hotels had closed down, and warning that if the mountain resort were to die, so too would others in the Troodos region, according to a study he has carried out.

“The government and the Cyprus Tourism Organisation (CTO) should be very concerned because the disappearance of the mountain resorts as tourist destinations is being accelerated, which results in a further reduction of the standard of living in the mountain villages and that is being followed by more migration to the cities,” economist Nicos Rossos told the Sunday Mail. 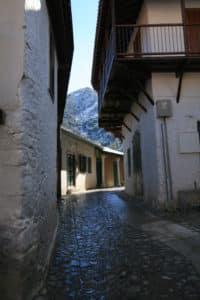 “Platres is in deep recession and practically all of its hotels have closed down. The top one, Forest Park Hotel, with 150 rooms and 85 years of history, is being offered for lease. It used to offer hospitality to royalty.”

Indeed, year after year, even though tourism to the island is booming and reached an all-time high of over three million visitors in 2017, hoteliers in mountain regions relate the same old story. Every August for around two weeks from the 14th of the month, they reach around 60 per cent capacity which sinks to 50 per cent by the end of the month and then continues to fall. From February to May they operate at a loss. And, some 98 per cent of their clientele are Cypriots escaping the city heat during the traditional August holiday period.

Aside from Platres, the mountain villages of Kakopetria, Agros, Pedoulas and Kalopanayiotis share 18 hotels between them but again unlike their counterparts on the coasts, they struggle to fill their rooms.

Hoteliers there have consistently begged the government for help. The main problems they face are lack of adequate connections to airports and coastal areas, exclusion from big tour operators’ holiday packages, and unfair competition from unlicensed hospitality venues and organisations that own holiday homes.

During his swearing-in ceremony for his second term as president on Wednesday, Nicos Anastasiades touched on the government’s plans to revive mountain resorts, something he officially pledged last September during a visit to Troodos. 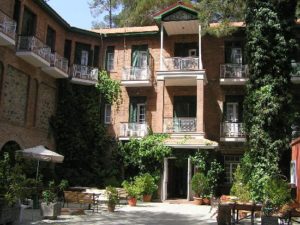 Back then he announced a number of infrastructure projects and plans worth some €16m to rejuvenate the Troodos region and attract tourists.

He also informed the communities there that a decision had been made to afford special incentives to tour operators to channel foreign tourists to the Troodos region for a few days as part of their packages. An incentive scheme worth €1m to upgrade hotels in the area would also be announced. It hasn’t yet.

So, while the wheels of bureaucracy grind slowly or often come to a halt when it comes to big schemes, Rossos is warning that “if and when Platres ceases to operate as a successful mountain resort it is inevitable also that all the other mountain resorts will be adversely affected”.

He said the Penteli Hotel had ceased operating over the past few years and was being offered for sale. “Nobody shows an interest,” he said. 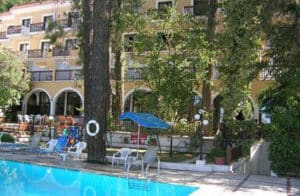 The ‘crown jewel’ of hotels in Platres, the Forest Park which has been owned by the Skyrianides family since it opened in 1936 has been extensively renovated and extended over the years but is unlikely to operate this coming summer “nor did it operate during this winter” Rossos said. It has been offered for lease.

“Other hotels have not been renovated because they do not have the means as they no longer have a sufficient number of guests. They fill up for only about 15 days in August. The Petit Palais did renovate but operates with guests for about two weeks in August,” he said.

Rossos said it was unacceptable that tourism authorities were not taking action quickly enough.

He suggests three immediate steps be taken to save Platres and by extension the other mountain resorts; government understanding that it must act now, a CTO marketing plan and the organisation of more activities in the region.

“Before the Second World War tennis tournaments were organised at the Troodos tennis club where a lot of people attended and great interest was shown,” said Rossos, adding that the Platres community board had created first-class tennis courts where international tournaments could be held, at the very least for countries in the region. The village also had a good football pitch, he added. 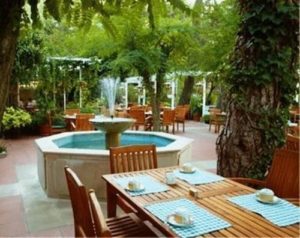 Other attractions could be visits and mini-bus trips to place of interest in the area such as Phini village with its pottery tradition, which Rossos suggests could have its own museum. He also suggests organised excursions to all 11 Unesco churches in the region, the Troodos Park, wineries, bread festivals, nature trials, arranging concerts by well-known Greek artists, and bird watching.

“Nobel prize winner poet George Seferis in one of his poems said the nightingales will not let you sleep at night in Platres,” Rossos added.

He said he had compiled a list of 12 places of interest around Platres. “But Platres lacks parks and parking places in central areas. These kinds of works are necessary for the improvement of the environment and for serving the tourists and the inhabitants,” he said.

“The state must pay for these works because the Platres development board is heavily indebted having spent considerably on sports grounds.”

In addition, he said something needs to be done about the hotels that are in demise, suggesting the Penteli at least be bought by the CTO, renovated and re-sold when things picked up.

“All hotel owners unable to renovate their premises because of lack of funds must be given long-term loans with a grace period at least of five years at an interest rate of 0.5 per cent,” he said. Rossos has forwarded his study to tourism authorities.

As far as marketing is concerned, he suggests that because the original development of Platres came through its popularity among inhabitants of countries with warm climates, efforts should be directed towards the Middle East and Gulf countries in particular.

“It’s good for Cyprus to participate in the London Travel Market Exhibition, but we do not draw tourism for the mountain resorts from such participation, we only draw tourism for the seaside resorts,” he said, adding that the inhabitants of Gulf countries seek cooler destinations during the hot months in their countries. “It is to these countries that the Platres hoteliers should direct their marketing efforts,” he said. Gulf inhabitants also have a higher income than many visitors to Cyprus in general.

“The alarm must be raised because mountain tourism is being eclipsed with the result that unemployment will follow and people will leave the mountain resorts for the towns to find work,” Rossos added.

The glory days of Platres

ROSSOS said he was told the story of how Platres became a magnet for the well-to-do by late Kokos Skyrianides, founder of the Pafsilipon and Forest Park hotels. Skyrianides was also among the creators of the Ledra Palace in what is now the Green Line in Nicosia and home to UN peacekeepers. 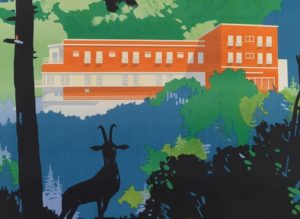 According to the story told to Rossos, when the British acquired Cyprus in 1878 from the Ottoman Empire, amongst the other military camps, they set up at Polemidia in Limassol.

The soldiers, however did a little too much sunbathing and were hit by sunstroke so the officer in charge ordered a sojourn to the mountains. Arriving at Platres they camped at the spot where the police station sits today, a building originally used by the British as an Anglican church.

English public servants soon erected many summer residences in the mountains and the British government was giving away free land to who so wished to settle in Platres.

Well-to-do Cypriot families subsequently bought these houses. Gabriel Coudounaris, founder of the Bank of Athens was one of them, according to Rossos, and liked to bring well-known personalities to Platres, spending three days a week there himself throughout the year.

Before the arrival of the English families the inhabitants of Platres were shepherds from Paphos who brought their sheep to graze during the summer months and returned to Paphos in the winter.

When the British built the Limassol-Platres-Troodos road, the tourist development of Platres began with the first hotel, the Olympos built by the Syrian businessman Nazim Houry in 1903. Cypriot families also started building summer residences there around that time. In 1936, the Forest Park Hotel was opened. 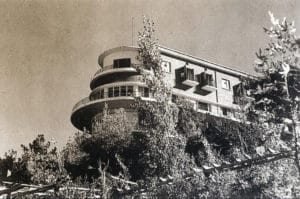 Overseas tourism to the resort consisted originally of members of the Greek communities of Egypt and the Sudan. Amongst its visitors were often royalty like King Farouk of Egypt.

In the meantime, hotels were also being erected in other mountain summer resorts, such as the well-known Berengaria in Prodromos, built by the Kokalos family, and also in Kakopetria, Pedoulas, Kalopanayiotis and Troodos.

After the Second World War the decline of Platres and the other mountain resorts began because, Rossos said, no measures were taken for the creation of appropriate services, or for the right marketing.

Also, Colonel Nasser who ousted King Farouk through a coup, expelled all Greeks from Egypt, and they ceased using Platres as a summer resort, he said. 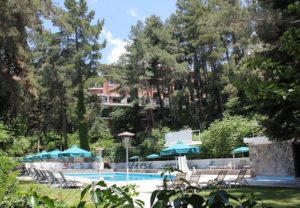 Rossos said the wider availability of air conditioning and the refrigerator also contributed to making it possible for city dwellers in Cyprus to stay home during the hot summer months and not seek out cooler climes. The eradication of malaria from Cyprus also played a major role, he said, because it made life in the cities during the summer months possible.

Our View: Anastasiades’ speech confirms turning his back on West