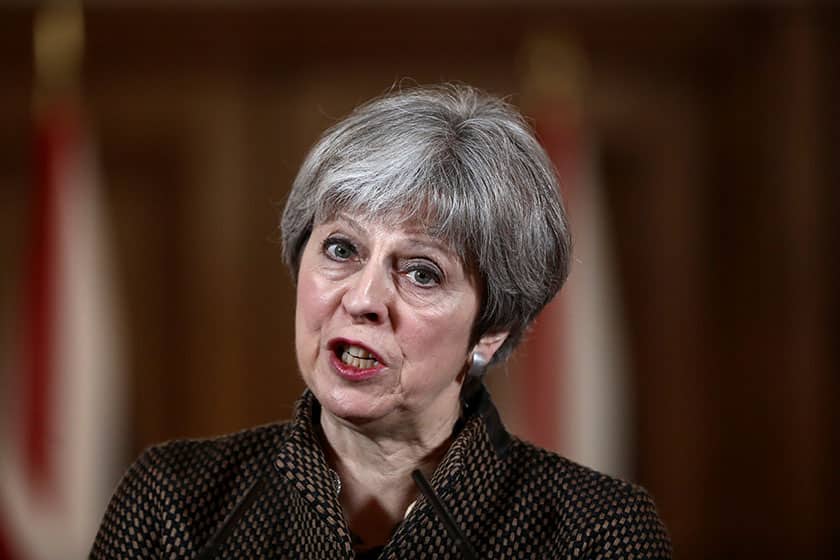 British had no alternative but to take military action to degrade Syria’s chemical weapons capability, Prime Minister Theresa May said on Saturday after ordering air-launched cruise missile strikes along with the United States and France.

Four Royal Air Force Tornado jets from the Akrotiri base in Cyprus fired Storm Shadow missiles at a military facility near Homs where it was assessed that Syria had stockpiled chemicals, Britain’s Ministry of Defence said.

May cast the strike as “limited and targeted” and came after intelligence indicated Syrian President Bashar al-Assad’s government was responsible for an attack using chemical weapons in the Damascus suburb of Douma a week ago.

May said the missile strike, designed to minimise civilian casualties, was aimed at deterring further use of chemical weapons and was not an attempt to topple the Syrian government.

“This is not about intervening in a civil war. It is not about regime change,” May said in statement made from her country residence at Chequers just minutes after U.S. President Donald Trump announced the strikes from the White House.

Defence Secretary Gavin Williamson said the mission had been highly successful and implied that no further action was imminent.

“We don’t expect that we’ll be a position where we’re having to make further strikes,” he told LBC radio. “We believe that the strikes we have taken last night had a significant impact in terms of what the Syrian regime can do in the future.”

By launching strikes without prior approval from parliament, May dispensed with a non-binding constitutional convention dating back to the 2003 invasion of Iraq. She said speed was essential and that military action was in the national interest.

May, whose government is propped up by a small Northern Irish party, said Britain and the West had an obligation to deter both Assad and others from using chemical weapons after the poison gas attack in Douma near Damascus killed up to 75 people, including children, last Saturday.

However, opposition Labour leader Jeremy Corbyn, a fervent anti-war campaigner, called the strikes “legally questionable” and said May should have recalled parliament from a holiday and “not trailed after Donald Trump”.

“Bombs won’t save lives or bring about peace,” he said in a statement. “Britain should be playing a leadership role to bring about a ceasefire in the conflict, not taking instructions from Washington and putting British military personnel in harm’s way.”

Britain has accused Russia of being behind last month’s nerve agent attack on former spy Sergei Skripal and his daughter in Salisbury, southern England – a charge Moscow has denied.

“While this action is specifically about deterring the Syrian regime, it will also send a clear signal to anyone else who believes they can use chemical weapons with impunity,” May said.

“We cannot allow the use of chemical weapons to become normalised – within Syria, on the streets of the UK, or anywhere else in our world.”

May said Britain and its allies had sought to use every diplomatic means to stop the use of chemical weapons, but had been repeatedly thwarted, citing a Russian veto of an independent investigation into the Douma attack at the U.N. Security Council this week.

“So there is no practicable alternative to the use of force to degrade and deter the use of chemical weapons by the Syrian regime,” she said.

The Western missile strikes demonstrate the volatile nature of the Syrian civil war, which started in March 2011 as an anti-Assad uprising but is now a proxy conflict involving a number of world and regional powers and a myriad of insurgent groups.

Trump said he was prepared to sustain the response until the Assad government stopped its use of chemical weapons.

Russia, which intervened in the war in 2015 to back Assad, has denied there was a chemical attack and has accused Britain of helping to stage the Douma incident to stoke anti-Russian hysteria.

Britain’s defence ministry said “very careful scientific analysis” had been applied to maximise the destruction of stockpiled chemicals while minimising any risk of contamination to surrounding areas.

Many politicians in Britain, including some in May‘s own Conservative Party, had called for parliament to be recalled to give authority to any military strike.

Former Prime Minister David Cameron lost a parliamentary vote on air strikes against Assad’s forces in 2013 when 30 Conservative lawmakers voted against action, with many Britons wary of entering another conflict after intervention in Iraq, Afghanistan and Libya failed to bring stability to the region. A YouGov poll for The Times newspaper this week indicated that only a fifth of voters believed that Britain should launch attacks on Syrian military targets and more than two-fifths opposed action.

Williamson said Britain had had to act swiftly and added May would update parliament when lawmakers returned on Monday.

President only told of bases’ role hours after strike (Update 3)

After the storm, City look to get back on track at Wembley