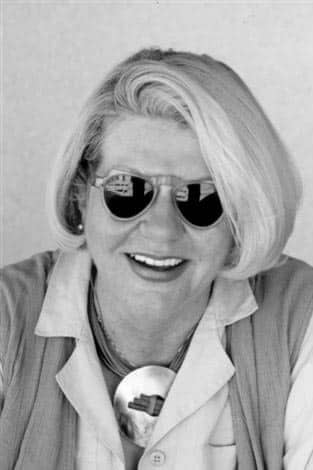 Jill was famous for her big specs and flamboyant dress

Irreverent, loud, funny, caring and fearless, you always knew when writer Jill Campbell Mackay was in the room. Born on April 9, 1947 in Perth, Scotland, long-time feature writer for the Cyprus Mail Jill died in her sleep at her home on April 14 after cancer returned for the third time a year ago.

She was divorced and lived in Konia, Paphos for the last 12 years, surrounded by her collection of modern art and books that she had read, books that she had published and even books that she had written, a space she shared with her cats and her beloved rescue dog Mojo. It was a place friends were made to feel welcome with wine, cigarettes, gin and laughter.

Well-travelled and well-read, Jill was an art school graduate (from the University of Dundee), before moving into publishing in London where she worked with some of the biggest publishing houses of the time including Picador. She went on to work for Andrew Lloyd Webber at The Really Useful Company, from where she was often sacked as the result of a boss’ drink-fuelled rage only to be reinstated on Monday morning. One of her greatest professional achievements was running the marketing for Glasgow European City of Culture in 1990. The year was a great success with over 3,000 events under the slogan ‘Glasgow – Smiles Better’. It was also the job of which her father was most proud.

Her entrepreneurial skills developed early when she would walk the 15 minutes to Loch Leven where trout fishing boats would be tied up overnight. She would wait for them to come in and jump in in search of beer and pop bottles to collect pennies on their return from a local pub. Edged out of a sideline, the fishermen reported her to the police who were not impressed on hearing about the young girl hanging around the pub. To make matters worse, the police inspector in charge of the area was her father.

Her brother Donald remembers being impressed when she was at college, bringing home a boyfriend for tea and an inquisition from her mum. The young man had really long hair and although an art student also played trombone and trumpet. “Mother was not impressed, even a couple of years later when I watched him on Top of The Pops playing in the Average White Band,” says her brother Donald.

With her Dame Edna specs, colourful array of long silky scarves, linen slacks and bright red lipstick, Jill relocated to Cyprus and began work here as a journalist, writing well received features and restaurant reviews for the Cyprus Mail and achieving the rare feat of keeping to every deadline.

In the last year she was very involved behind the scenes in a charity initiative which has raised over €25,000 for the Cancer Patients and Friends Association Pasykaf. Jill too benefited from the services of Pasykaf, especially the home care nurses who supported her throughout her treatment.

Jill had no time for banality, and nowhere more so than when it came to cancer. She despised the cliched use of terms like ‘battle’, ‘brave’ and ‘victim’ to describe those with the disease.

“What we are all missing here is a healthy dose of good old-fashioned anger,” she wrote in 2015. “Anger at why so many people are diagnosed here in Cyprus, anger at why we don’t have island wide resources for early diagnosis. Anger at why our hospitals are unable to service the needs of cancer patients.”

“One of life’s characters. Not to be forgotten easily and every reason for her to be missed,” said fellow Paphos expat and former PR expert Clive Turner.

“I’ll miss our Shady Pines Home for retired and failed entertainers – which we created around the ‘wine club’ in her garden under the shady trees and Moroccan lamps and hazy summer nights. Evenings to be remembered forever. End of an era – end of a legend,” added local thespian Kathleen Ruddy.

Jill is survived by her older sister Margaret Anne and brother in law Iain and by her younger brother Donald and sister in law Karin and nieces and nephews Neil, Lynne, Donald, Ingrid and Kathy and further family.

The funeral will be held on Monday, April 23. A graveside ceremony will be held at the Lemona cemetery in Paphos at 11.30am. Family flowers only, a collection will be made for Pasykaf

Economic convergence is failing in Cyprus

The continued legacy of the Greek Junta