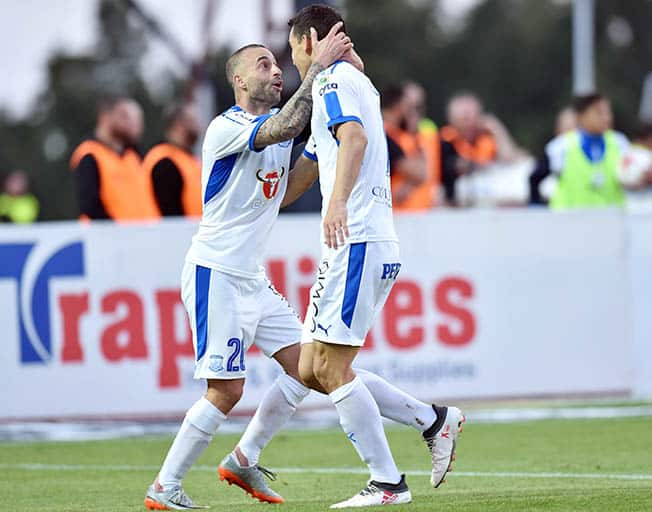 Two crucial games will take place in the Cyprus football championship this weekend that may go a long way in deciding this season’s champions.

With just four rounds of matches left, leaders Apollon take on Anorthosis in Limassol while second-placed Apoel travel to Larnaca to face AEK.

Apollon lead the standings by two points and, given their current form, they are the favourites. The Limassol side boast the best attack and also possess the meanest defence and, with a win against Anorthosis, they will take a huge step towards their fourth title.

“It will be a tough game, but with hard work we believe that we can win and fulfill our goal of becoming champions,” said Apollon spokesperson Fanourios Constantinou.

Coach Sofronis Avgousti has just one player unavailable through suspension, midfield Alef dos Santos, but having rested six first teamers in last Wednesday’s cup semi-final first leg win over Pafos FC, he has a number of players that can competently fill the key midfield role.

Having already secured their European involvement, Anorthosis have already begun preparing for next season.

However their spokesperson Savvas Pilakoutas was quick to point out that the game against Apollon was important for two reasons. “Apollon remain the only team we have not beaten this season and secondly we want to finish the season preserving our unbeaten away record,” he said.

All five games between the two sides this season were closely-contested affairs, with Apollon winning two by the odd goal.
Champions Apoel meanwhile can forget about a sixth consecutive title if they do not leave the Arena stadium in Larnaca with the three points, especially if Apollon avoid defeat against Anorthosis.

The two sides met last Wednesday in the first leg of their cup semi-final with AEK winning 2-0, a scoreline that flattered Apoel who produced what surely was one of their worst performances in years.

In his defence, Apoel coach Bruno Baltazar rested 10 players, clearly showing that his priority is the league title.

Apoel have had to contend with a lot of injuries this season and there are no signs of a let-up. This time Baltazar has no recognised wide player with Aloneftis, Oar, Efraim and Antoniou all out. However defender Carlao has managed to shake of a niggling injury and is certain to start the game.

AEK remain unbeaten at home in the league and will do their utmost to preserve this run. However this time round it may be the turn of Imanol Idiakez to rest a few of his players ahead of the second leg of the cup next Wednesday.

Idiakez will probably give the league’s top scorer Florian Taulemmeuse a starting berth following his long layoff through injury while midfielder Hector Hevel is suspended.

Both games kick-off at 7pm.

Tales from the coffeeshop: Our old commies are back