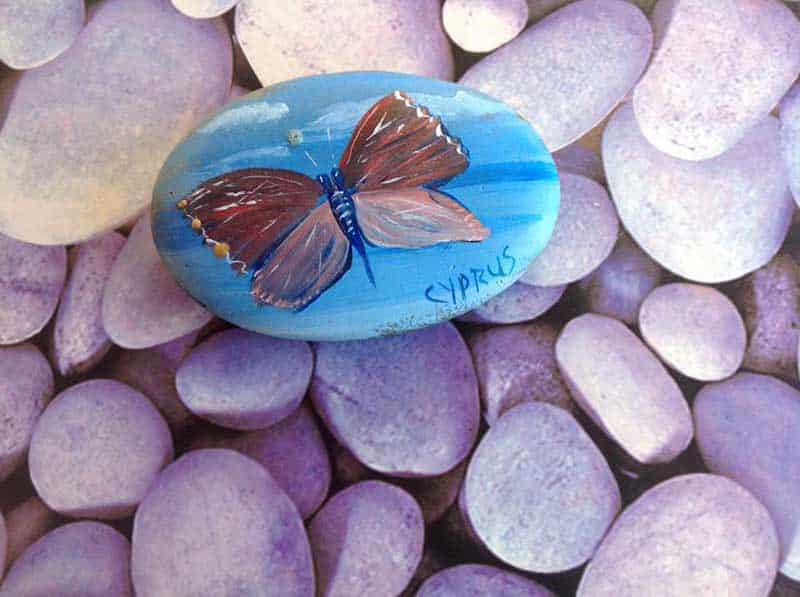 The name smacks of gruff geological groupies: camo-clad predators with a passion for coarse-grained schist and welded tuff. This is not, in fact, the case. Rock hunters are generally interested in specimens more smooth, rounded and brightly-hued; their seekers are perfectly ordinary people. In fact you, too, could join their ranks if you wished. There’s no particular skill involved, just a little time, an active mind, and a whole load of curiosity…

“That’s the great thing about rock hunting,” explains Leoni Pitman, the mastermind behind the Cyprus Rock Hunters. “It’s for everyone; anybody and everybody. There’s no age limit and no restrictions in terms of ability, age or language. When it comes to rock hunting, no barriers exist, and that’s what makes it so lovely!”

Based on similar collectives abroad, this Facebook group is the first of its kind on the island. In fact, the idea came to Leoni in a flash when she stumbled upon a timeline post describing the activities of the Thanet Rock Hunters – a group based in her home town in Kent. “I thought the idea looked rather interesting, checked it out, and realised it was perfect for Cyprus!”

Spurred to action, Leoni set up the local Facebook group at the end of February, posted the idea to a few friends and sat back to see what would happen. “I must admit,” she chuckles, “I was very surprised at the levels of interest. Within 24 hours I had 400 requests to join – something I certainly hadn’t been expecting!” Two months on, and the group is already 500 strong; the majority of members are based on the island but all sorts of nationalities are represented – Cypriot and English, but also Russian, Dutch and Austrian. “It’s an idea that appeals to all, I think,” Leoni muses. “After all, this is simple, easy, fun, inexpensive and artistic. And art knows no barriers.”

As a former potter (though a professional chef for 40 years, Leoni is also a qualified artisan), she’s no stranger to artistic endeavour, and has painted (and hidden) more than a few rocks herself. “It’s such a simple process, and so rewarding,” she reveals. “Choose your rock, paint or draw whatever you want on it, and then head outside and hide it. That’s it! There are no rules. As long as you’re not chucking your rock at someone or something,” she laughs, “you’re on the right track!”

Leoni does have a few handy hints: “If you take a photo of your rock or rocks before you hide them, and post that to the group along with the area in which you’re hiding it, that helps the hunters. Then, when someone finds it, they can trace it back to you if they want. Also, it’s a good idea to write #cyprusrockhunters on the bottom, so we can get a hashtag going,” she adds. “And we recommend that you pop the date and the country on the bottom too.”

The country? Surely we all know we’re in Cyprus? “Well yes,” says Leoni. “But whoever finds your rock doesn’t necessarily have to take it with them. You can, of course leave it for others to find, and maybe just post a photo of you holding it – that would be lovely for the creator to see! – but if you like you can take it back home with you. And home,” she adds, “might not actually be in Cyprus!”

It turns out that rock hunting is actually bit of a global pastime – much like geocaching but easier and more colourful! Recently, a rock was found in Nigeria that originated in the UK: “The date and location told its finder it had been hidden in Kent in 1980! Now, we’ve only just started,” Leoni continues, “but who’s to say that one of our rocks couldn’t travel the world and bring a smile to the face of someone living in, say, Alaska?!”

For the time being, however, she’s pretty sure the majority of the rocks remain on the island. Leoni has hidden some of her intricately decorated creations around her home town of Oroklini – “try the village square, take a look round the garden!” she suggests with a twinkle in her eye! – and various posters are known to have secreted their rocks in the Cessac area of Dhekelia, around the harbour in Paphos, somewhere near Deryneia, the beach at Latchi, on Konnos Beach, and around the Ayios Giorgios church in Potamos, Liopetri. “I estimate we have about 100 hidden around the island so far; not many in the grand scheme of things, but more than enough for a start.”

As for designs, well, anything goes. Leoni tends to work with patio paints, but recommends anything that will stick to the surface. Sharpies, decoupage, oil paint, gems and nail polish all work pretty well, she suggests, and the motif or message are completely up to the creator. Her own designs include hedgehogs, snails, dogs, trees, stars and patterns, and often come with a happy little message. “The first rock I ever hid simply bore the words ‘This is the first rock of the Cyprus Rock Hunters’,” she laughs. “It’s hidden somewhere in Dhekelia, and for all I know, it might still be there!”

While some may not entirely grasp the beauty of rock hunting, for the most part, the numbers suggest that the public are highly intrigued by the pastime. “It’s such an inventive thing,” Leoni acknowledges. “It encourages art – even though you don’t have to be artistic to do this. It costs almost nothing. And it makes any walk that bit more exciting. Plus, it’s a great way to get kids out of the house and away from their screens.”

The group may still be in its infancy, but it’s definitely bringing joy to families and individuals all over the island. And further plans are already in the works. As a Scout leader, Leoni is hoping to get the local Beavers involved in painting, hiding and searching for rocks. And CyHerbia is planning a related event in the coming months, which will see kids can paint rocks and hide them round the gardens. In the meantime, there are plenty of hidden gems out there for everyone to be getting on with… You don’t need to be a gripped by granite or fixated on flint to take part in this remarkable rock hunt!

Syllouris says obstacles to new parliament must be overcome