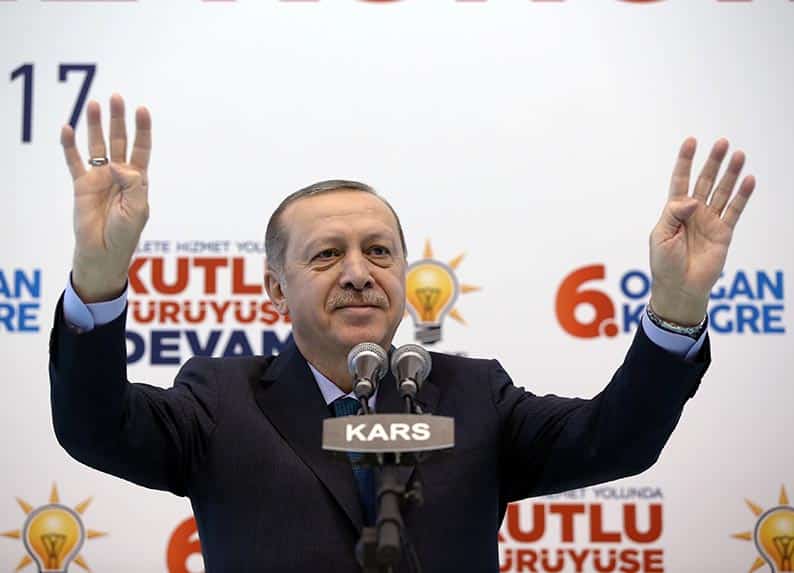 TURKEY’S Tayyip Erdogan unofficially kicked off his re-election campaign on Saturday, vowing to defeat the secularist opposition in “historic” snap elections that he has called for June.

Although yet to formally declare his candidacy, Erdogan held what was effectively his first campaign rally in the coastal city of Izmir, the stronghold of the secular CHP opposition party.

He promised thousands of flag-waving supporters victory in the presidential and parliamentary polls and declared the leader of the CHP, Kemal Kilicdaroglu, a dictator.

“I believe we will make a political history on June 24 with record votes both on parliamentary and presidential elections,” Erdogan said.

If Erdogan wins – as seems likely as the AK Party has formed an election alliance with the national opposition party MHP – he will return to the presidency with new sweeping executive powers that were narrowly approved by referendum last year.

Impatient to get those new powers, Erdogan last week called the elections more than a year earlier than scheduled as he said Turkey needed a more powerful presidency to confront economic challenges and the war in Syria.

The election will be conducted under emergency rule, imposed following a failed 2016 coup. An international watchdog, the Council of Europe Parliamentary Assembly Monitoring Committee, said that could jeopardise the elections’ legitimacy.

To win in the first round, a candidate needs more than 50 percent of the votes. Polls indicate a second round is likely to happen and would be on July 8 if necessary.

Erdogan’s most credible challenge is seen coming from Meral Aksener, a former interior minister who last year founded the nationalist Iyi (Good) Party and has said she would run.

The CHP said its head is unlikely to run because it believes the president should not be a political party leader.

The pro-Kurdish opposition party HDP said jailed former co-leader Selahattin Demirtas will most likely to be its candidate.

Former president Abdullah Gul, one of the founding members of the AK Party, said he would not be a candidate, ending weeks of speculation.

Erdogan has won nearly a dozen elections and dominated Turkish politics since the Islamist-rooted AK party swept to power in 2002.

While opponents at home and abroad accuse him of dictatorial tendencies, Erdogan remains Turkey’s most popular politician, admired by millions for championing the Muslim working classes and delivering airports, hospitals and schools and strong economic growth.

A performance for human form and ceramics