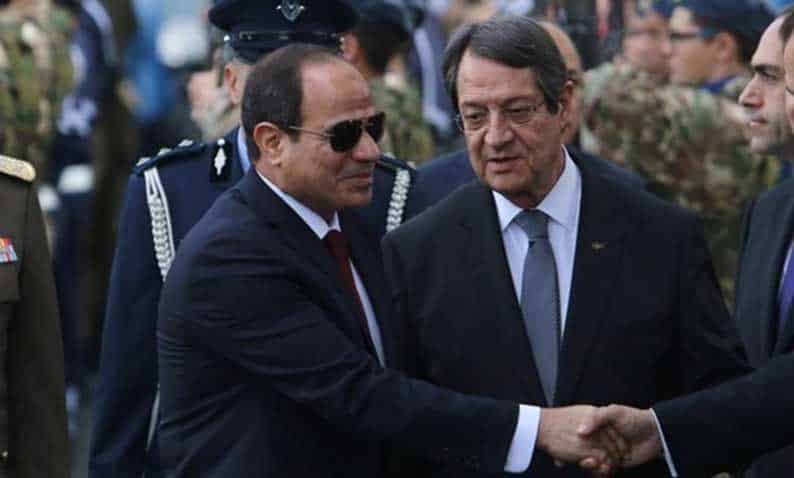 President Nicos Anastasiades left for Alexandria, Egypt, on Monday to co-launch the Nostos initiative, a programme aimed at bringing Greek and Cypriots who have lived in Alexandria and their descendants back to the city.

Egypt’s President Abdel Fattah el-Sisi and Greek President Prokopis Pavlopoulos will also attend the Nostros: The Return event. The initiative is part of the diaspora programme signed between Egypt, Cyprus and Greece, which aims to gather Cypriots and Greeks or their descendants in Alexandria for a return trip to the place where they or their ancestors once lived.

From April 30 to May 6, the Egyptian government will host a group of second and third generation Egyptians who live in Greece and Cyprus to pay a visit to various sites in Alexandria, Cairo, El Alamein, Saint Catherine`s Monastery and Sharm El Sheikh.

According to Egyptian online news site Ahram some 200 people, including 120 Greeks and Cypriots were expected to arrive in Egypt over the weekend to take part.

The ancient Greek word nostos means a homecoming or homeward journey, specifically the return of Odysseus and the other Greek heroes of the Trojan War.

A twinning protocol was signed on Sunday between the cities of Paphos and Alexandria on the sidelines of the launch of the programme.

The official twinning ceremony was held in the afternoon at the Governorate of Alexandria, where Mayor Paphos Phedonas Phedonos and Governor of Alexandria Mohamed Sultan signed the twinning protocol.

On May 1, Anastasiades will meet with His Beatitude Theodoros II, Pope and Patriarch of Alexandria and All Africa who will award the former with the medal of the “Great Cross of the Apostle Mark”.

He will also have a bilateral meeting with the Egyptian president and will attend a dinner hosted by Sisi in honour of the presidents of Greece and Cyprus before returning to Cyprus on Tuesday evening.

Cyprus, Greece and Egypt signed a cooperation protocol for the Nostos programme in November 2017.

Presidential Commissioner for humanitarian affairs Photis Photiou, who is accompanying Anastasiades, has described the initiative as historic for the three countries, since it was the first time that cooperation on diaspora was achieved and the three countries decided on a common strategy.

Many Greeks and Cypriots emigrated to Egypt, especially Alexandria in the late 19th and early 20th centuries.

Many stayed in the city, at least for the first few years, while some moved on to live in other parts of the country.

By the third decade of the 20th century, the Greeks and Cypriots had established a very visible presence in the heart of Alexandria, side by side with other foreigners.

In the 1950s and 60s, however, the foreign presence in post-independence Egypt started to decline, which included the Greek and Cypriot communities. Most left the country, while some stayed and others chose to go back and forth between Egypt and their country of origin.

Trying to end scandal, May appoints Javid as interior minister