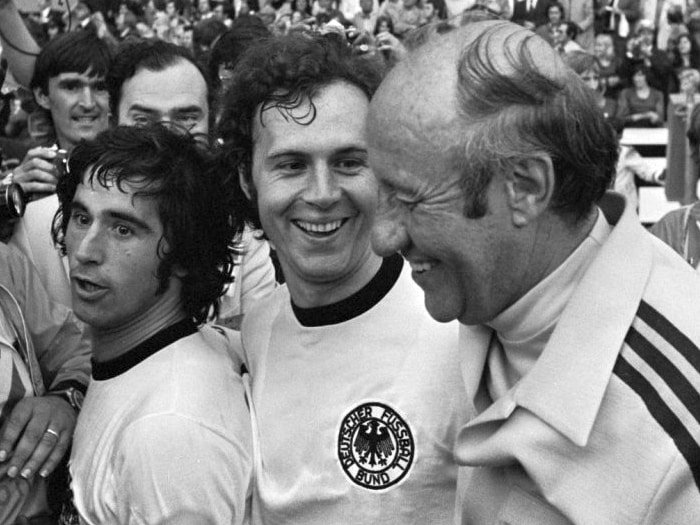 The 1974 World Cup was hosted by West Germany and featured another change to its format.

A second group stage replaced the knock-out rounds after the preliminary first round, with both winners playing in the World Cup final.

A new trophy was introduced as Brazil had won the Jules Rimet Cup for the third time four years earlier in Mexico, which meant they got to keep the trophy.

The tournament got underway with a new FIFA president elected days before the finals began. Englishman Sir Stanley Rous was replaced after 13 years in charge and in came Brazilian Joao Havelange. He was the first non-European to hold the post since FIFA was founded in 1904.

Unlike Mexico 1970, a tournament baked in sun, the 1974 World Cup was to be plagued by torrential rain.

Security was also beefed up after the Munich Olympic massacre in 1972 where 11 Israeli athletes were murdered.

West Germany were the favourites, having won the European Championships two years earlier in a convincing way, and as hosts in 1974 with a team containing the likes of Franz Beckenbauer and Gerd Muller, they were tipped to go far.

The Dutch, playing at the tournament for the first time, played some of the best football ever seen under inspirational captain Johan Cruyff, leading many to describe their style as ‘total football.’

It was the first World Cup England had entered and not qualified. The Poles who had eliminated them in the qualifying groups proved that they were not a one time wonder as they managed to defeat the Brazilians and claim third place.

Scotland were the only British team to be present at the tournament. They set a World Cup record as they were eliminated in the first round without losing a match. They were the only unbeaten team in the tournament and up until then, every other team in World Cup history had ended up winning it.

Zaire, the only African side competing in the Finals, were eliminated from the first round after suffering three defeats and conceding 14 goals without scoring.

THE FINAL - West Germany 2 The Netherlands 1

The duo were without doubt the best players in the world in the absence of Pele.

The confident Dutch, who had set the tournament alight with some brilliant play, struck first through a Johan Neeskens penalty in only the second minute without a West German player touching the ball.

Paul Breitner equalised with another penalty in the 25th minute before Gerd Muller, also known as Der Bomber, put the Germans ahead just before half-time.

The second half saw Sepp Maier being forced to make save after save as the Netherlands laid siege to the German goal without scoring, as West Germany celebrated their second World cup title.

Muller’s four goals in the tournament saw him claim the all-time goal-scoring record in the World Cup with 14 goals overall. The record stood for 32 years.

Holland grabbed  the title of ‘people’s champions’ and while it’s a shame that Cruyff and Neeskens didn’t get their hands on the trophy, the alternative would be no World Cup winner’s medals to show for the careers of Beckenbauer and the brilliant Muller.

West Germany’s victory was the only case of the reigning European champions winning the World Cup until Spain accomplished the feat in 2010, although France have also held both trophies at the same time by winning the 1998 World Cup followed by Euro 2000.