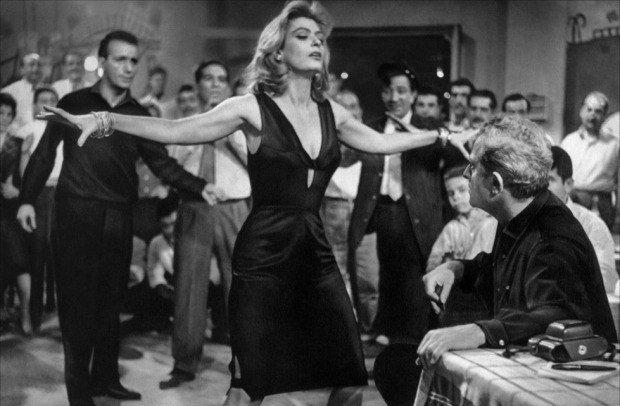 Melina Mecouri in Never on a Sunday

‘If music is the food of love play on; give me excess of it.’ So I make no apology for going on about music for a second Sunday in succession. My excuse is that it is an excess of Greek music I have in mind.

It was not much in evidence in the Eurovision contest so I propose to redress the balance by showing that some of the best popular music last century came from Greece.

Shakespeare probably had Italian music in mind when he wrote the food of love line, but it is Greek music that does it for most people in Cyprus and, dare I say it, Turkey. Whatever else, I have yet to meet a Turk who does not enjoy Greek music.

Kemal Ataturk famously used to escape to the Greek tavernas of Istanbul for a glass or two of raki with Greek fishermen where he enjoyed the Greek popular songs of his day, mostly rembetika.

My taste is more eclectic. The Greek music I would choose if I were invited on the late Roy Plomley’s imaginary Desert Island would be of many colours and shades going as far back as the music of the Greek community of Asia Minor.

Desert Island Discs, the weekly programme that has now deteriorated into a kind of weekly pseuds’ corner, presented by the obsequious Kirsty Young, is not what it used to be. However, the idea behind the programme, as originally conceived by Plomley, provides a good balance between interesting conversation and music.

A guest is invited every week to talk about their life and times and chooses eight pieces of music to take on a desert island where he or she is supposed to be shipwrecked and stranded alone.

It concentrates guests’ minds on music they really like. The programme has become such an institution that people are often heard to say that they like a particular piece of music so much it would be on their Desert Island list.

Some guests make eccentric choices. The opera singer Elizabeth Schwarzkopf chose only songs sung by herself and the Tory politician, Enoch Powell – of rivers of blood notoriety – chose half his music from Richard Wagner operas.

I shall spare you Wagner, although his Siegfried Idyll, which he composed and had performed for his wife Cosima as a Symphonic birthday greeting, is worth listening to as an example of the ideal present for your lover.

The selection here is not limited numerically but by the constraints of space. My taste in Greek music goes back to the mists of time before I was even born. In 1931 George Seferis wrote a poem called Denial that was later set to music by Mikis Theodorakis that became the song Sto Periyiali to Krifo sung first by Grigoris Bithikotsis and then more mellifluously by Maria Farantouri.

It is a song that has everything you want from a song; melody, imagination and meaning and controversy. In this case about the last verse whose punctuation and twist at the end were lost in the singing of the poem.

In the original the poem ends with the stanza: ‘with what spirit, what heart, what desire and passion we lived our life; a mistake! So we changed our life.’

Apparently, Seferis was going through a bad patch in 1931 when he wrote the poem and his poetry matches the predicament of someone who realises his life is based on a false prospectus and decides to change it.

He was very unhappy about having to study law and there may also have been a love interest gone wrong and so he wrote a poem and it became the hymn of liberation from fascism, yet it may have been a lot more personal. Who knows what’s in a poet’s head? Had he studied for the Bar in England he could have been both lawyer and poet. Half the Bar in England can recite from Shakespeare as and when their cases require it.

George Seferis was born in Smyrna, present-day Izmir in Turkey, whose mountains and sea are the inspiration of my next choice: Mena me lene Tsakitzi sang in Greek and Turkish. Turks love the pronunciation of the Turkish lyrics of this song by Greek singers from mainland Greece. The effect is like English is spoken by French people. The song is about a noble villain with a lion heart. A bit like Kurt Weill’s Mack the Knife memorably played on the trumpet and sang by Louis Armstrong.

A song to celebrate the love-hate between Greeks and Turks is Lavrentis Mahairitsas’ Enas Turkos sto Parisi whose title has a hint of George Gershwin’s American in Paris. It made me laugh for days when I first heard it and is a must in my list even though it is not a classic.

It is about a jealous boyfriend whose girl is studying in Paris and sends him photos of herself and her cat called Turkos whose tail is stroking her legs suggestively. This makes him furious and jealous – ‘this Turkos of yours will make me a Turkos’ he warns her.

In Greek the expression ‘I became a Turk’ is a classic hangover from Ottoman times. It means I became very angry. I have a feeling the Turks do not much mind being thought of as powerful in anger. The song is very funny and people need to be able to laugh at their prejudices rather than succumb to them.

Talking about humour and the funny side of life, the English, who have a great sense of humour love Maria me ta kitrina – Maria with the yellow dress. It is a catchy tune with hilarious words. Maria is asked who she loves more, her husband or her neighbour, to which she replies that she loves her husband but the neighbour better – whatever that means! It is an interesting play with words that the English love even if it is in Greek.

Many Greek songs have been international successes. As students in London in the 1960s and 70s we dined out on Never on Sunday and Zorba the Greek for years. Who can ever forget Melina Mercuri’s husky rendition of Never on Sunday? If it were in my gift I would return the Elgin Marbles at once if she came back and sang Ta Pedia tou Pirea, – as Never on Sunday is known in Greek – just one more time.

Agnes Baltza in her album Songs My Country Taught Me introduced many Greek songs to the world. They are many so I shall only single out O Tahidromos Pethane – The Postman Died – and Garifallo st’afti – Gypsy Carnation – because they are true classics.

There are Greek songs for the broken hearted galore and you can’t have a selection of Greek music without Otan Simani e Ora – When the Bell Tolls – preferably sang by Stamatis Kokotas in concert and Kaimos by Grigoris Bithikotsis. They are most people’s favourites although Autumn Tears by Stavros Xarhakos is gentler on the soul and is as much about heartbreak as it is about closure.

But I want to end with two cheerful choices of general appeal. They are Demetroulla Mou and Emis me Tram Pigename – or The Last Tram. No song captures having a fun night out in this part of the Mediterranean as Demetroulla and no evening ends better than having to catch the last tram home – poor and a little tipsy – but happy.

The word in Greek for having such fun is glenti. The Turkish word is eglence. There may be a link between the two words.

Climate change in the East Med underlines need for renewables