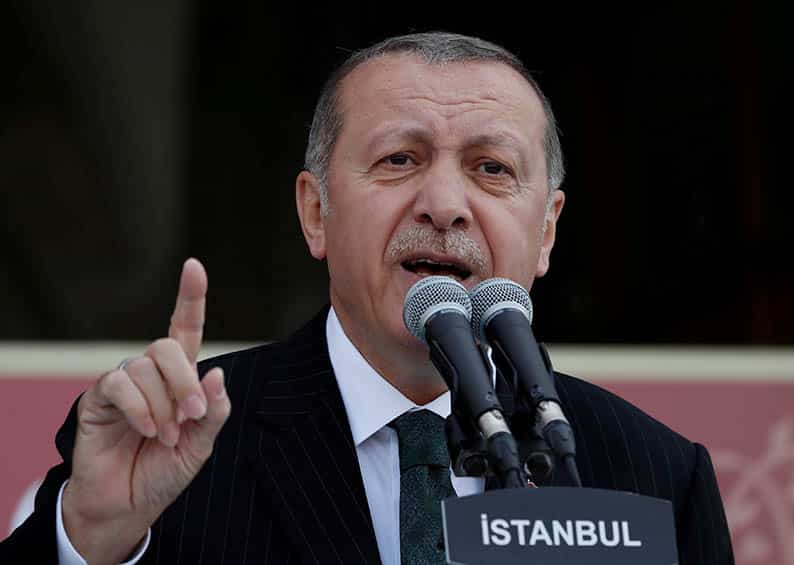 Turkish President Tayyip Erdogan is up for re-election in June

The Turkish drillship Fatih, formerly DeepSea Metro II, is close to Antalya in Turkey on with the intention of heading at some point soon for the Eastern Mediterranean to begin deep-sea drilling, possibly close to or inside Cyprus’ exclusive economic zone (EEZ).

Observers expect the drillship to remain in Antalya until after the Turkish elections on June 24. According to Politis, its sources said any drilling actions by Turkey in the region could trigger tensions, not only around Cyprus but also in Israel, Egypt and Lebanon.

It said, the arrival of the Fatih, (‘Conqueror’ in Turkish), in the region, and even the ship’s renaming to honour Istanbul’s conqueror Ottoman Sultan Fatih Sultan Mehmet, was designed to serve the election campaign of Turkish President Tayyip Erdogan.

Politis said after June 24, the Fatih is expected to move to Cyprus’s EEZ but where exactly was not yet clear, it said.

Turkey, which says it is protecting the rights of Turkish Cypriots, claims parts of various blocks in Cyprus’ EEZ, saying the areas in question form part of its continental shelf. The claim includes part of blocks 1, 4, 5, 6 and 7, to the south and southwest of the island.

The breakaway regime in the north of the island lays claim through its own ‘exclusive economic zone’, which in effect says that half of Cyprus’ EEZ belongs to it, including blocks 1, 2, 3, 8, 9, 12 and 13.

Block 10, awarded to US giant ExxonMobil, which is due to drill in the coming months, is not contested by Turkey.

Back in February, Turkish warships off Cyprus physically blocked a drillship leased by Italian energy company ENI for two weeks in block 3, forcing it to eventually leave the region.

On Monday, Turkish Cypriot press quoted General Hulusi Akar, chief of the Turkish General Staff, as saying Ankara would like to find solutions to problems with its neighbours. He referred to the Aegean, the Mediterranean and Cyprus and claimed:

“Turkey is in favour of the solution of the existing problems in the Aegean in an amicable manner within the framework of international law and good neighbourly relations,” he said.

“In the meantime, the necessary activities are being carried out with determination with the aim of protecting our country’s rights and interests deriving from the international law and agreements in our seas and mainly the Aegean and the Mediterranean and in Cyprus,” he said. Turkey is not a signatory to the UN Law of the Sea Convention.

Turkey’s first drillship set off to the Mediterranean on Thursday, as the country’s energy minister announced that Ankara would spud an offshore well this summer.

The Fatih left a port in the gulf of Izmit last week, plotting a destination in the Mediterranean off Antalya, in the sea between Turkey and Cyprus.

Speaking at the farewell ceremony, Turkey’s energy minister Berat Albayrak said the ship would be carrying out its first drill at a depth of 2600 metres off Antalya.

“We are going forward into the future with greater security and with revolutionary steps in the energy field, Albayrak said, according to a translation of his remarks.

He said also that the drillship would be joined by a second vessel.

The Turkish survey ship Barbaros Hayrettin Pasa has carried out seismic surveys for hydrocarbon reserves between Cyprus and Turkey since early April.

Turkey has sought to block gas exploration by Cyprus, deploying warships and conducting military drills inside Cyprus’ EEZ, drawing criticism from Greece, the European Union and the United States.

Our View: Pride Parade shows how much progress our society has made

Thiem takes on Zverev in quarter-finals