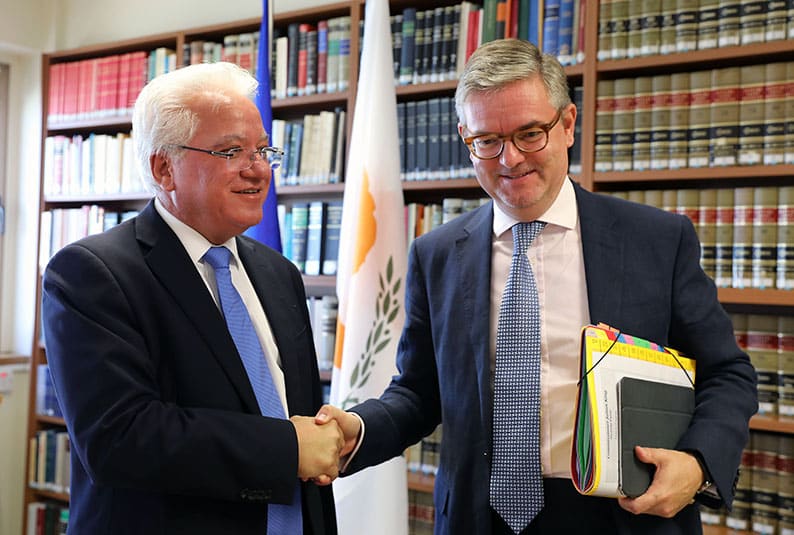 King, who is visiting Cyprus to discuss terrorism, cybercrime and organised crime, said member states were on the front line in facing threats and underlined that measures taken collectively should reflect the interests and concerns of those states.

Speaking at a joint news conference, both King and Nicolaou agreed on the need for collective action to address threats.
“Terrorism, cyber, serious and organised crime are blind to borders, these are shared threats and we are better able to deal with them when we work together,” King said.

He highlighted the need to combat radicalisation in communities, on the streets and especially on the internet, saying that “far too much illegal terrorist content is circulating online.”

“Each of the terrorist attacks that we have experienced across Europe over the past year had a link to online terrorist content,” he said.

The EU Commissioner acknowledged the important efforts that the Cyprus government had undertaken to implement the Passengers Name Records Directive (PNR) and added that Cyprus was a leader in dealing with the challenge of cyberthreats.

He warned that despite progress made on the ground in Iraq and Syria in combating groups that often are behind encouraging or directing terrorist attacks, there should be no “false sense of security.”

“Terrorism and extreme violent radicalised behaviour is a threat and a challenge that is going to be with us for some time and we need to maintain our efforts to deal with it,” he concluded.

Nicolaou highlighted the need for collaboration among EU member-states in exchanging information.

“Only through collaborating in this way we can pre-empt and crack down on such cases and crimes,” he said.

The Cypriot minister briefed the Commissioner on the security measures and actions in critical infrastructures taken by Cyprus in dealing with terrorist threats.

“We have, I would say, adopted and implemented to the largest extent EU policies and our effort will continue, so that in cooperation with other member-states we can address this threat,” he added.

On cross border and organised crime, Nicolaou said that since early 2010 there were criminal elements active in various member states, including the Pink Panthers jewel thieves in Cyprus.

Cyprus, he said, had called for further strengthening the exchange of information among the member-states and improved use of mechanisms on a European level.

“We have taken many measures and we seem to be working in the right direction,” Nicolaou said, noting that the government had approved the latest legislative obligations such as the PNR directive, which were pending before parliament for final approval.

Coronavirus: Anastasiades ‘would rather be judged for strict measures’ than mourn victims