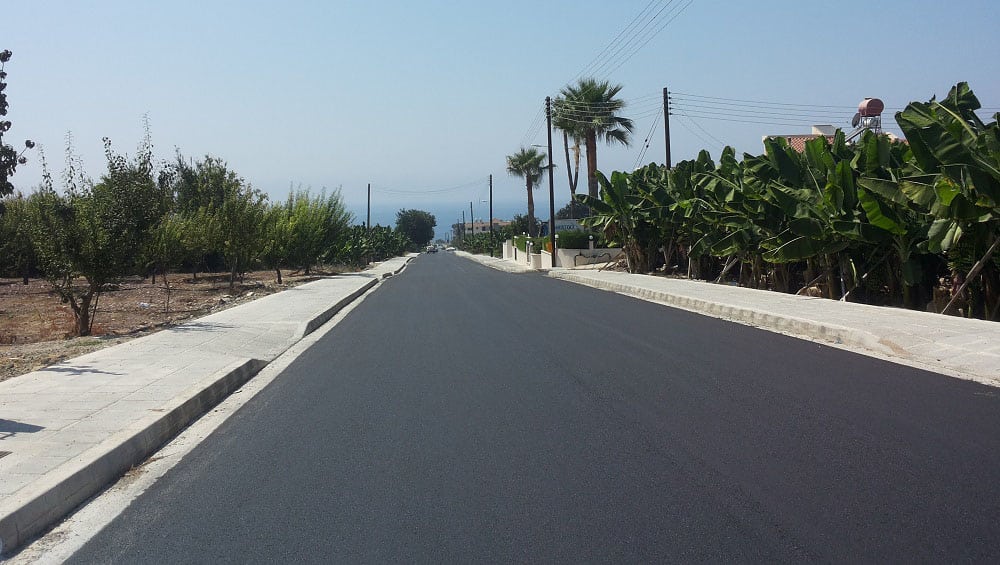 A newly surfaced road in Kissonerga

The road network in the tourist area of Kissonerga in Paphos is being repaired and resurfaced after work by the sewerage company Sapa left them in a terrible state, according to the local community leader.

Geirge Stylainou told the Cyprus Mail that the council is now suing Sapa. He said that the local council will asphalt about 1 km of the road network in the tourist area at a cost of sixty thousand euros. The cost of which, he said, should have been covered by Sapa when work by them, which involved digging up roads, was completed.

“They should have fixed the damage when they made the sewage system five years or so ago, it is their responsibility, but the sewerage board did not press the contractors to do a proper job,” he said.

Kissonerga council has a case against Sapa at court which was lodged two years ago, concerning costly road repairs already undertaken, but which was put on hold, due to ongoing negations, in the hope that they would step up and repair the damage. However, Stylianou said that these negotiations concluded with the sewerage board unwilling to fix the roads.

“We are claiming damages of around two million euros,” he said.

Sapa was hit by a corruption scandal in recent years and a number of officials, including former Paphos mayor Savvas Vergas, were found guilty in the case. According to prosecutors, kickbacks were paid out by private contractors to Sapa members in a bid to secure the construction and operation of waste-management contracts.
The community leader said that following a decision by the Kissonerga community council, roads in the main tourist area will be repaired and resurfaced this year. He also noted that the council is suing Sapa for money spent on upgrading the roads of the last four years or so, as this should have been carried out by them, as part of the contact to upgrade the sewerage facilities in the area.

So far, over the last five years, half a million euros has been invested in the roads, he said.
The latest road surfacing comes with a sixty thousand euros price tag which has been covered by the municipality
“It has been our policy in recent years to prioritise roads which are in a very bad condition or are busy and have a lot of heavy traffic. This year we are concentrating on reconstructing the main roads that have hotels and hotel apartments along them.”

Stylianou said that repairs come in the wake of a large number of complaints by residents that roads are full of potholes, uneven and cause difficulty to drivers.

He added that the road network upgrades will continue and are expected to take a number of years.

“We started with the centre of the village and are working our way outwards by priority,” he said adding that residents should not have to suffer poor roads as its clearly not their fault the system is such a mess.

“There is still a lot to do as they are in a very bad state,” he said.

Our View: Our lawmakers approve laws they know are unconstitutional