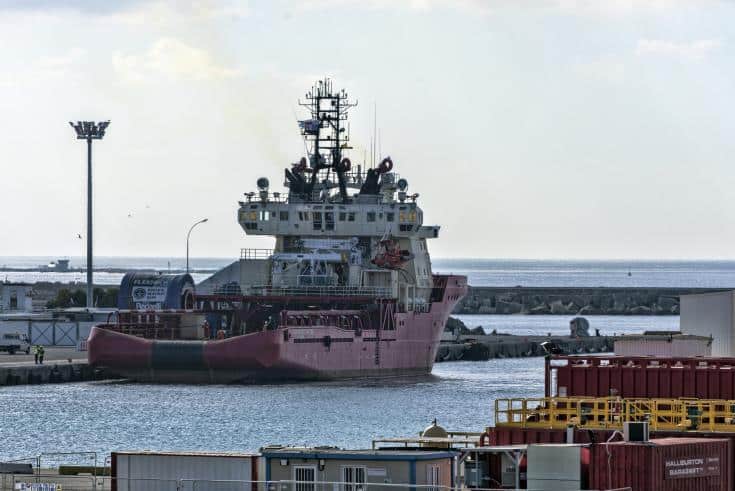 ExxonMobil and Cyprus could hit the jackpot later this year when the US energy behemoth bores down into the seabed in search for natural gas. But according to an energy analyst, the potential windfall could have broader ramifications for the government’s arrangements with other companies operating in the island’s exclusive economic zone.

Charles Ellinas tells the Sunday Mail of highly sanguine chatter inside the industry over the potential of block 10, located southwest of Cyprus and licensed to a consortium of Exxon and Qatar Petroleum.

The seismic data is extremely encouraging.

Weeks ago, Ellinas was speaking to a senior executive of one of the companies that had bid for block 10 but did not get the contract.

The expert adds the obligatory disclaimer that nothing is for certain until drilling actually commences.

But indications are so buoyant that Ellinas says that if Exxon do discover a reservoir, it may hold up to 15 trillion cubic feet (tcf) of gas.

That alone would be enough to warrant construction of a land-based natural gas liquefaction facility with three trains (or production lines) of 5 tcf each, per the industry norm.

What’s more, says Ellinas, Exxon possess the wherewithal as well as the technical know-how to finance and build the plant themselves.

“Exxon always tend to go it alone; that’s how they operate, and they get things done as fast as possible.”

The US company is planning two back-to-back exploratory drills in the last quarter.

Assuming all goes as planned, the results could be in six months from today.

But a bonanza in block 10 would be a real game changer for all players in the exclusive economic zone (EEZ).

Should Exxon find a significant amount of gas – even 10 tcf – it would then make sense to likewise divert the gas from the Aphrodite and Calypso fields into a land-based LNG facility.

In this way, development of the (potentially) three fields could be combined, rather than developing them on a standalone basis, for example building separate pipelines.

The Aphrodite play, in block 12, holds an estimated 4 to 4.5 tcf; and preliminary estimates point to anywhere from 6 to 8tcf for Calypso in block 6.

It is for this reason that Ellinas advises both the government and the stakeholders – Noble, Shell and Delek – not to rush with Aphrodite.

“They’ve waited years to develop Aphrodite, so what’s another six months until they see what Exxon finds?”

His remarks relate to developments this week, when it came out that the Aphrodite consortium is pushing for a renegotiation of their Production Sharing Contract (PSC) with the government.

The news was leaked after a briefing given to party leaders by energy minister Giorgos Lakkotrypis.

It was reported that the Aphrodite consortium want to amend the PSC because, having crunched the numbers, they’ve found that their profits from developing the reservoir (laying a pipeline to Egypt) might not justify the investment.

It is believed that, under the PSC formula for Aphrodite as it stands, the Cypriot state’s share of profits is between 60 and 62 per cent.

Lakkotrypis reportedly told politicians that the government saw best to continue talks with the consortium, in a bid to find a ‘sweet spot’ satisfying both sides.

This suggests the government is willing to renegotiate the PSC – but that is a bad idea, says Ellinas.

“If they do, it will open a can of worms, as other concession holders in the EEZ will also want to renegotiate their share of revenues. In real terms, this could mean hundreds of millions less for the Cypriot state in the long term.”

Whereas the analyst understands why the Aphrodite companies are asking for tweaks to the PSC, he recommends that the government hold fast.

Especially since a major Exxon discovery might be around the corner.

Lakkotrypis decided to get ‘feedback’ from the political parties regarding the Aphrodite consortium’s request. He is to launch a round of meetings with the parties later this month.

Then, in September, the minister will reportedly be summoning representatives of the Aphrodite consortium for new talks, aimed at hammering out a revised deal.

Asked about this, Ellinas said that tactically it was a sound move by the minister.

“It’s obviously aimed at putting the parties in the loop, so that they cannot later accuse the government of going it alone and fumbling the Aphrodite PSC and losing millions for the state.”

On a related front, the expert brought up the matter of Energean’s pitch to Cyprus to build a pipeline from its Israeli offshore gas fields and import 0.5 to 1 billion cubic metres (bcm) of gas per year to the island.

Ellinas calculates that the gas could be delivered to Cyprus at less than $6.50 per million btu – substantially lower than what it would cost to import Liquefied Natural Gas (LNG) via the tender put out by the Natural Gas Public Company (Defa).

“I don’t understand why Defa are not considering Energean’s offer. If Defa goes with its tender, the final cost – including infrastructures – works out to between $10 and $11 per million btu, resulting in higher electricity prices.

“And Cyprus is already one of the most expensive countries in the EU in terms of electricity. So why are we going down this path?”

Over and above these issues, there looms the threat of Turkish provocations at sea. The Turkish foreign ministry has stated unequivocally that if the Greek Cypriots proceed with exploration, “We will drill too.”

Earlier in the week, Turkish foreign ministry spokesperson Hami Aksoy put foreign diplomats in Cyprus on notice not to overstep, after two foreign ambassadors here hinted that their countries would come to the Republic’s aid in the event of a new standoff at sea.

“The Turks will drill, after all that’s why they acquired a drilling platform. The question is where; perhaps in the undeclared EEZ to the north of the island, perhaps off the southern coast of Turkey” Ellinas says.

“But not in the Republic’s declared EEZ, I don’t think. Not at this stage, at least.  Although Turkey has made it crystal clear it will stop any new exploration activities in block 3, operated by ENI.”