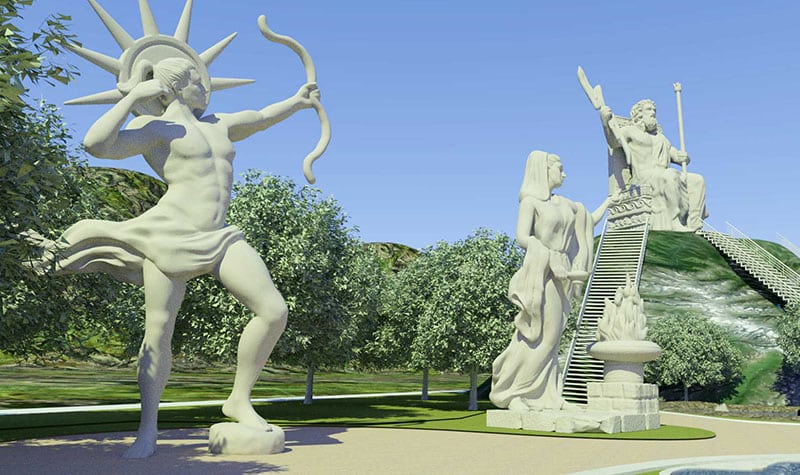 “Off with their heads, and on with mine!” – or something of the sort – said Roman Emperor Caligula when he demanded that all artistically acclaimed statues of Greek gods, especially the wondrous statue of Zeus at Olympia, be brought from Greece so that their heads could be removed to replace them with his sculpted portrait.

Unlucky for him, Caligula was assassinated in 41AD, before his grand plan could be implemented. Unlucky for everyone else, the giant 7m wide and more than 12m tall statue of Zeus, completed by the sculptor Phidias by around 320BC and considered one of the seven wonders of the world, was destroyed several centuries later.

It seems that luck is right around the corner however, as the Cyprus-based project Amazing World plans to bring the ancient world with all its richness of history, legend and myth to the 21st century with the main attraction being the recreation of the former wonder of the world.

A majestic stone maze park is planned to be completed by June 2019 – less than three years since the team initially sat down and drew up a plan for the project ­in an area between Limassol and Paphos, purposefully away from the overcrowded beaches and deeper into Cyprus’ mountains, which we all know we need more excuses to visit in the hot summer months.

Aiming to create a whole new world for tourists and locals of all ages, the project will be brought to reality by a team headed by Mirakhmed Turakulov.

“It will be unlike anything that already exists,” Mirakhmed told the Cyprus Mail.

“We’re building a vast stone labyrinth, with walls engraved with sculptures taking visitors through the history of Cyprus, from ancient to modern times,” Mirakhmed said. While the project is still raising funds on Indiegogo some of the sculptures have already been completed and preparation of the site has begun.

The labyrinth will be surrounded by greenery and waterfalls, creating an oasis which will complement the dreamlike experience of strolling by statues of ancient Greek mythological gods and goddesses scattered outside the labyrinth walls, taking visitors right into the myth of Theseus and the Minotaur.

According to the myth, the Minotaur was the son of Pasiphae, wife of King Minos of Crete. Queen Pasiphae slept with a bull sent by Zeus, and gave birth to the Minotaur, a creature half man-half bull. King Minos was embarrassed, but did not want to kill the Minotaur, so he hid the monster in the Labyrinth constructed by Daedalus at the Minoan Palace of Knossos.

The world has many puzzling structures, from the hedges of the Hampton Court maze in London to the meandering velvety cypress trees of Australia’s Ashcombe Maze, keeping the Thesean spirit alive.

Historically associated with religious and magical experiences, labyrinths nowadays mostly retain the magical, meditative quality of what is often a personal journey along paths of unknown direction, guided deeper into the structure by the hope of reaching the secrets hidden in the centre.

But despite the strange power that draws us to the idea of getting lost in the twists and turns of towering walls, the Amazing World stone maze promises a journey of enlightenment through the stormy history of the island, with the awe-inspiring statue of Zeus awaiting visitors at the heart of the labyrinth.

“Our goal is to build a world for the modern day person so they may embark on a journey through time and enrich themselves with culture, art, architecture and the mythological belief of the people from the archaic ancient times,” according to the project’s website.

“We’re going to replicate the original statue to the greatest extent possible,” Mirakhmed said, setting expectations for the new park quite high, especially since the original seventh wonder of the world, in addition to being enormous, was also ornamented with ebony, ivory, gold panels and precious stones.

While the project also aims towards strengthening the local community  specifically that of villages such as Dora, Fasoula, Mamonia, Maronas, Kidasi – and fostering economic growth and tourism, Mirakhmed stressed that it’s the lack of an immersive and comprehensive educational experience of this kind that motivates him above all.

“I’ve been in Cyprus for six years,” he said, “and I still have not found somewhere where you can learn ancient and modern history in an approachable way.”

While Cyprus hosts an abundance of ancient archaeological sites and even though the Cyprus Museum exhibits artefacts and from the Neolithic Age to the Byzantine period and various cross-shaped idols from the Chalcolithic period, gold jewellery and statues of gods and goddesses, none of the above are actually fun, as enlightening as they may be.

Amazing World plans to keep fun at the centre of learning, with visitors absorbing history and culture while simultaneously being on a quest to find the God of gods in all his glory.

For more information and to make a contribution go to www.indiegogo.com/projects/stone-maze-park-and-statue-of-zeus-in-cyprus-adventure#/ or www.amazing-world.eu

Angry antiques dealer is stuck in the ‘nouveau poor’