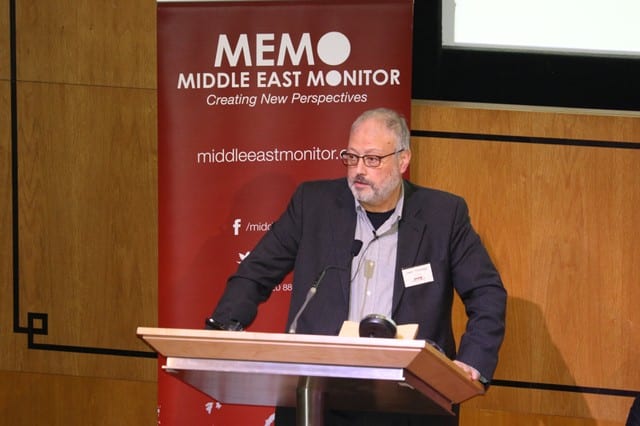 By Stephen Kalin and Sarah Dadouch

Saudi Arabia will allow Turkey to search its consulate in Istanbul for prominent Saudi journalist Jamal Khashoggi, who has been missing for three days after entering the diplomatic mission earlier this week.

“The premises are sovereign territory, but we will allow them to enter and search and do whatever they want to do. We have nothing to hide,” Crown Prince Mohammed bin Salman said in a Bloomberg interview published on Friday.

He said Khashoggi had left the building not long after he entered. Asked if Khashoggi faces charges in Saudi Arabia, Prince Mohammed said it was first important to discover where he was.

“If he’s in Saudi Arabia, I would know that,” he added.

Human rights groups have called on Saudi Arabia to verify Khashoggi’s whereabouts after Turkish and Saudi authorities offered conflicting accounts of his disappearance, with Ankara saying there is no evidence he left the diplomatic mission and Riyadh saying that he exited the same day.

Khashoggi, who has lived in self-exile in Washington for the past year fearing retribution for his critical views, entered the consulate on Tuesday to secure documentation for an forthcoming marriage, according to his fiancée, who waited outside.

If Saudi Arabia had detained Khashoggi without acknowledging it, his detention would constitute an enforced disappearance, Human Rights Watch said on Thursday. It called on Turkey to deepen its investigation into the case.

“The burden of proof is on Saudi Arabia to produce evidence for its claim that Khashoggi left the consulate alone, and that Saudi agents have not detained him,” said Middle East director Sarah Leah Whitson.

Press freedom watchdogs also raised red flags, while the Washington Post, which has regularly featured Khashoggi’s writing since last year, published a blank space where his column would normally appear.

“Given the Saudi authorities’ pattern of quietly detaining critical journalists, Khashoggi’s failure to emerge from the Saudi consulate on the day he entered is a cause for alarm,” said Sherif Mansour, Middle East and North Africa Program Coordinator for the Committee to Protect Journalists.

Sophie Anmuth, head of the Middle East desk for Reporters Without Borders, called on both governments to ensure Khashoggi reappears quickly.

“Until otherwise demonstrated, he is still inside the Saudi consulate in Istanbul and the Saudi authorities are responsible for his safety and well-being,” she said in a statement.

Hatice Cengiz, Khashoggi’s fiancée, told Reuters he had been concerned about a crackdown on dissent in the kingdom, but assumed he was safe outside the country.

Turan Kişlakçı, a friend who heads the Arab Turkish Media Association, said Khashoggi received assurances from Saudi officials before his visit that he could enter safely.

Turkish presidential spokesman Ibrahim Kalin told reporters that Khashoggi remained in the consulate and the authorities were negotiating with the Saudis to resolve the issue.

The consulate said it was working with the Turkish government to “uncover the circumstances” of his disappearance.

Khashoggi is a familiar face on political talk shows on Arab satellite television networks and used to advise Prince Turki al-Faisal, former Saudi intelligence chief and ambassador to the United States and Britain.

Over the past year, he has written columns inveighing against Saudi policies towards Qatar and Canada, the war in Yemen and a crackdown on dissent which has seen dozens of people detained.

Washington Post editorial page editor Fred Hiatt said the newspaper had reached out to “anyone we think might be able to help locate him and assure his safety,” including U.S., Turkish and Saudi officials.

Saudi Arabia is ranked 169th out of 180 countries in RSF’s 2018 World Press Freedom Index, a few places behind Turkey. All public protests are banned in the kingdom, as are political parties.