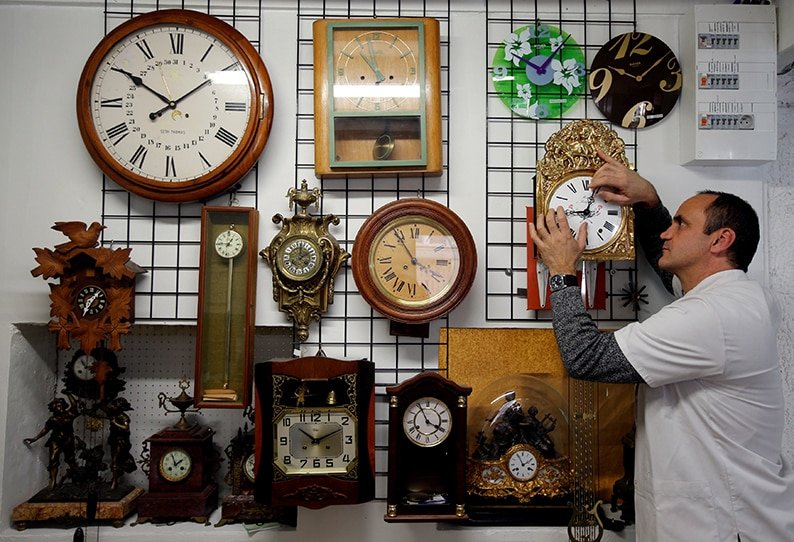 Serge Kertchef, a watchmaker, adjusts the hands on a wall clock in his workshop in Marseille, France

CYPRIOTS, like the rest of Europeans, will put their clocks back for winter on Sunday, probably for the last time, as EU members states have until next April to decide to keep the switch to daylight saving.

Winter time kicks in at 4am marking the end of the Summer Time that started on March 25 this year.

The measure was originally introduced to make better use of natural daylight, but it has been questioned lately if this is still relevant in a modern society which uses electricity for activities no matter if the sun is up or not.

Last month, European Commission president Jean-Claude Juncker announced with some fanfare a plan to scrap the twice-yearly switch of Europe’s clocks from next year. Millions of people had called in a survey for the decades-old practice to end, saying getting up an hour earlier from March and then back again in October was a pain.

EU officials said Juncker, who will step down as EU chief executive next year, also wanted to make a point about the Union, much derided by a rising strain of nationalism. He wanted to step back from imposing rules on member states — although the plan means going from demanding the time-change to banning it.

The Commission wants each EU government to decide by April which time zone they want to be in permanently — whether in October 2019 they want to stay in summer time forever or turn their clocks back one last time to permanent winter time.

Member states have a first full chance to discuss the issue on Monday when their transport ministers meet in Graz, Austria. The 9 a.m. start may feel gentle for those who benefited from an extra hour’s sleep on Sunday morning as clocks go back.

Diplomats and EU officials say it is most likely that, in the coming months, governments will hold up the process to have more time to work through the implications for transport, energy, road safety and so on — not to mention which time zone they want to choose permanently.

Some criticism of scrapping summer and winter time changes focuses on the Commission’s assertions that most Europeans back the move. While there have been calls in some countries, notably in Scandinavia and Germany, for an end to the switches, the Commission’s survey was queried by experts who warn online polls tend to be filled in by a small minority who care about the question.

Some 4.6 million EU citizens — out of 510 million — took part in the Commission’s online survey over the summer. Of those, 84 percent were against putting clocks forward and back every year.

However, the Commission acknowledges that it was not a systemic sounding of opinion across the bloc — fully seven in 10 respondents were in Germany, where the survey generated substantial media interest.

Liverpool return at the top of Premier League

In defence of citizenship-by-investment programmes