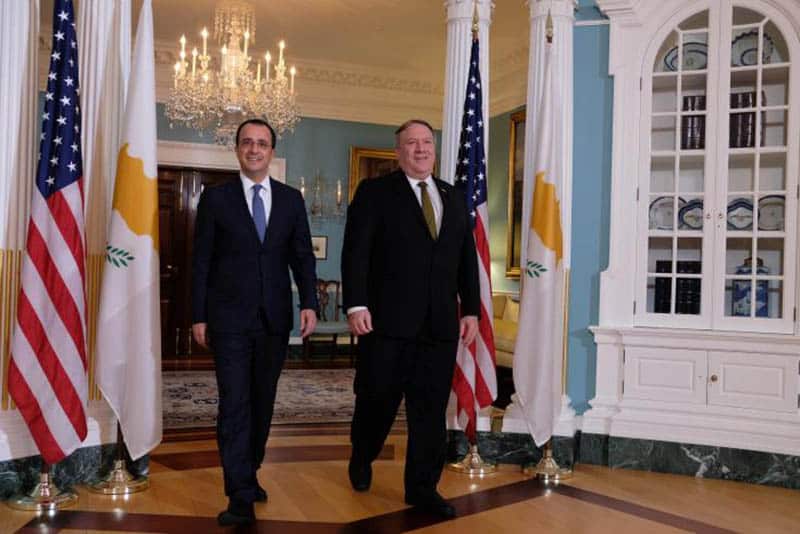 Bilateral relations, regional developments and the Cyprus problem were the main issues discussed during meetings Foreign Minister Nicos Christodoulides had in Washington on Tuesday night with his US counterpart Mike Pompeo and Wess Mitchell, Assistant Secretary of State for European and Eurasian Affairs.

At the state department, Christodoulides and Mitchell signed a statement of intent to strengthen and develop bilateral security relations. The statement will promote mutual interests in combatting terrorism, strengthening security at sea and borders and promoting regional stability.

In statements after the meetings, Christodoulides said the discussions with the two officials concentrated on three issues.

The second field, he added, is regional developments and the role Cyprus can play through trilateral cooperation with neighbouring states. It is important, he added, that the US acknowledge the work that is being done and the results that will ensue from trilateral cooperation agreements and “we hope that soon there will be developments as far as the US participating in these agreements.”

The third issue which was examined was the Cyprus issue, Christodoulides said, adding that the US expressed their support, both for the Secretary General’s efforts and those of his envoy, Jane Holl Lute. He said they exchanged views on the security and guarantees aspect and the need for Cyprus to continue its role in the Eastern Mediterranean as a pillar of stability and security.

Expressing the government’s satisfaction for the signing of the statement of intent, Christodoulides said further strengthening the strategic partnership with the US is not directed against any third country.

“We are working on a positive agenda and through a positive approach to handle common challenges and problems”, adding that this partnership is open to all countries that share the same values for the Eastern Mediterranean region.

Replying to a question concerning the Turkish threats in view of Exxon Mobil’s activities in Cyprus’ exclusive economic zone, Christodoulides said that for the last six months there have been statements nearly on a daily basis from Turkey which constitute threats against Cyprus and the exercise of its sovereign rights. “We will not follow suit,” the minister said, adding that the republic’s activities conform with international law and the Law of the Sea Convention of 1982.

Competition for young innovators and scientists