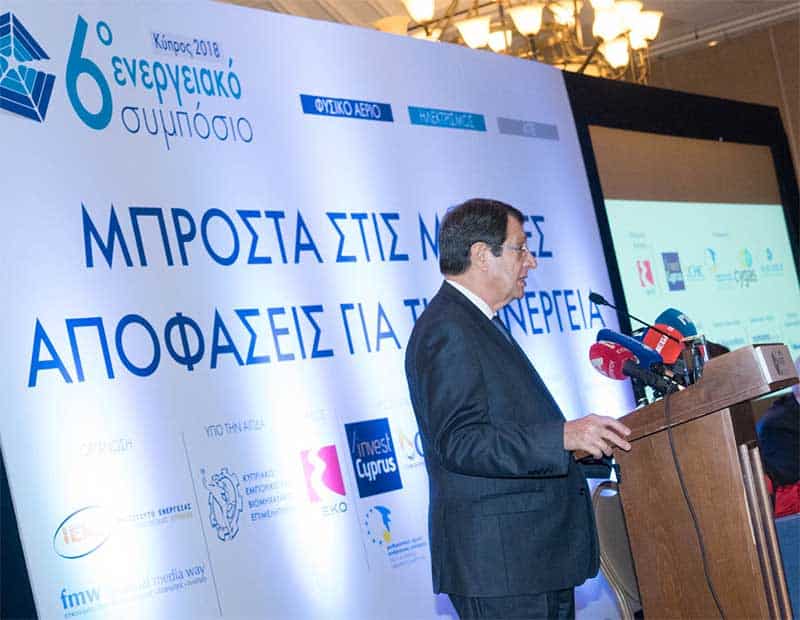 Greece, Italy, Cyprus and Israel are drafting an intergovernmental agreement on the EastMed pipeline with the aim of signing it in the first quarter of 2019, Greece’s Energy Minister Giorgos Stathakis said on Tuesday.

In an address to the 6th Energy Symposium entitled ‘Faced with great decisions on energy’, delivered on his behalf by Youli Boyatzopoulou the Head of the Economic and Commercial Section of Greece’s embassy in Nicosia, Stathakis called the EastMed pipeline “a project of strategic importance for Europe, Greece, Cyprus and the wider Eastern Mediterranean”.

“Discussions between the countries involved to go ahead with the implementation of this landmark energy project uniting Israel and Cyprus with Greece and the rest of Europe have matured,” he said.

According to Stathakis, the work undertaken by technical teams to draft the text of an intergovernmental agreement is expected to be completed soon and “we aspire to signing the agreement during the first quarter of 2019.”

The statement came a day after the government dismissed as baseless press reports that the EastMed pipeline was likely not feasible as a project.

Spokesman Prodromos Prodromou said when the necessary consultations were concluded there would be an agreement among the participating states. “Results will be announced officially once they have been reached,” he said.

The EastMed project is under development by IGI Poseidon SA, a company equally owned by Depa SA and Edison International Holding. It has received €35m in funding from the European Commission as a Project of Common Interest (PCI). The pipeline is currently designed to initially carry 10 billion cubic meters (bcm) a year from the East Med to Greece, about 1,900km, where it will connect to the Poseidon pipeline to Italy, about 300km.

Some industry experts believe the four governments and the EU cannot fund the project, which would require investor participation, and buyers for its gas.

Aside from the EastMed project being aired at Tuesday’s conference in Nicosia, the chairman of Natural Gas Public Company of Cyprus (DEFA) Symeon Kassianides in his address said the project for the introduction of liquefied natural gas (LNG) in Cyprus would be feasible after securing financing by the European Commission and the European Investment Bank (EIB). He also said that many companies had shown an interest in participating in DEFA’s tender for the design, construction, and operation of an LNG import terminal in Cyprus.

Kassianides said that unlike previous tenders that did not make it possible for natural gas to come to Cyprus, the separation of the infrastructure project from the gas supply has been documented in the security of supply that helped the Cypriot project to get European financing. As a result, he said, the project “is considered to be feasible and there’s a lot of interest from companies to participate in the tender”.

In his address, Invest Cyprus Chairman Michalis Michael said prospects from the energy sector were huge, adding that everyone was now awaiting the outcome of ongoing exploratory drilling in Cyprus’ EEZ, where US giants ExxonMobil are involved.

Michael added that while energy developments were a cause for optimism, at the same time Invest Cyprus was focusing on a multi-level approach, promoting investments in sectors such as tourism, shipping, research and development, education and large construction projects.

Police call on CBC governor to clarify why she was ‘scared’

US ‘model soldier’ to be sentenced for Islamic State support