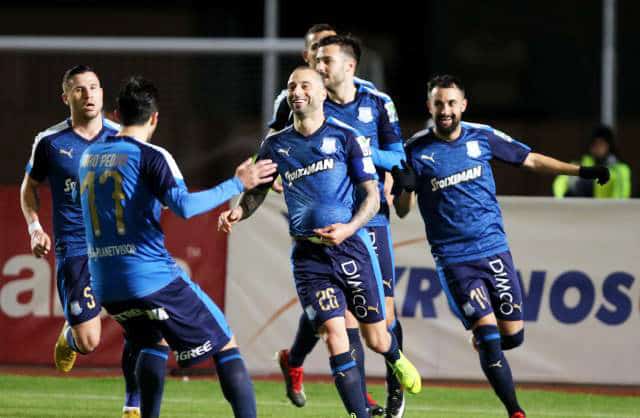 Apollon moved level on points at the top with Apoel following their 3-1 defeat of Omonia and Apoel’s unexpected 1-1 draw with Nea Salamina, in the Cyprus football championship over the weekend.

Elsewhere, AEK narrowly beat AEL and are just three points behind the Limassol team, while at the other end of the table, Alki and Ermis Aradippou, grabbed their first playoff points with wins over Pafos FC and Anorthosis respectively.

In yet another spineless performance Apoel dropped two more points, this time against Nea Salamina in Larnaca. The home side were more than a match for the champions, especially in the opening 45 minutes, where they dominated play and completely overran Apoel’s slow and undermanned midfield putting the visitors’ defence under considerable pressure.

Nea Salamina took the lead as a result of Apoel’s weak link with debutant Leo Tisdell creating space by waltzing past a couple of opponents and then being on hand to slide the ball into the net after Apoel goalkeeper Romo could only parry Araujo’s shot into his path.

Apoel tried to hit back and Gayas Zahid saw his effort come back off the post, but 10 minutes from the break the same player managed to beat Vezelofski.

Even though Apoel did improve after the restart they still lacked any incisiveness in the final third with the Nea Salamina defence coping with ease with anything the visitors threw at them and thoroughly deserved the draw.

Apollon had no such problems against a timid Omonia as they defeated the Nicosia team 3-1.

Zelaya’s early goal (13th minute) eased the pressure on the Apollon players allowing them to dictate the tempo and when Sardinero doubled the score for his team late on in the first half the game was all but over.

Fotis Papoulis added a third from the penalty spot just before the hour mark while Ramirez grabbed Omonia’s consolation goal 15 minutes from the end.

In the third top group game AEK managed to overcome a gutsy performance by AEL who must be kicking themselves as they should have left the Arena stadium with at least a point.

The only goal of the game arrived in the 78th minute after Igor rifled the ball past AEL’s Projec from the edge of the penalty area and this after AEL’s Jurado failed to find the net from close range a couple of minutes earlier.

In the relegation scrap bottom-placed Ermis Aradippou recorded their first win after 17 league games as they beat Anorthosis 2-1, and this despite playing for almost an hour with a man short after Lagos was sent off on the half hour for a second bookable offence.

A goal in each half, a penalty by Taralides and a strike by Boula were enough to give the Aradippou team the three points.

Anorthosis did manage to reduce the deficit late on through Mikael Duric but it is evident that their off-field problems have spilt out onto the pitch. The future of the coaching stuff is shaky to say the least while a huge player clearout is expected at the end of the season.

Alki recorded a much needed away win as they rather unexpectedly defeated Pafos FC 3-0 and moved just outside the relegation zone.

A Zivulic own goal on the half-hour paved the way for Alki’s huge win with Flores doubling the score before half-time.
Stavrou wrapped up the score from the penalty spot in the 65th minute.

Pafos FC finished the game with ten players after their goalkeeper Moll saw a straight red two minutes from time.

The final game of the round took place on Monday night, with Paralimni beating Doxa 1-0.

From Gounaris to Sinatra