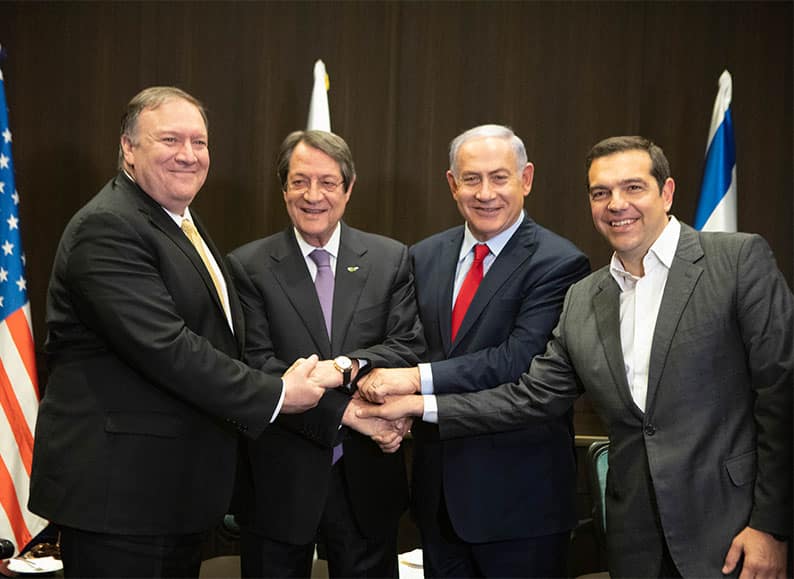 US Secretary of State Mike Pompeo, President Anastasiades, Israeli Prime Minister Benjamin Netanyahu and Greek Prime Minister Alexis Tsipras in Jerusalem
The governments of Cyprus, the US, Israel and Greece on Wednesday agreed to increase regional cooperation, support energy independence and security, and to “defend against external malign influences” in the Eastern Mediterranean and the broader Middle East.

The US Secretary of State Mike Pompeo, who attended the Jerusalem summit, expressed US support for the trilateral mechanism established by the three countries when, according to a brief official declaration following the summit, they met “to affirm their shared commitment to promoting peace, stability, security and prosperity in the Eastern Mediterranean region”.

According to the statement, Pompeo noted the importance of increased cooperation with the three countries.

“The leaders agreed to increase regional cooperation; to support energy independence and security; and to defend against external malign influences in the Eastern Mediterranean and the broader Middle East,” the declaration said.

“They welcomed the recent natural gas finds in the Eastern Mediterranean and its potential to contribute to energy security and diversification,” it concluded.

President Nicos Anastasiades also met separately on the sidelines of the summit with Israeli Prime Minister Benjamin Netanyahu and with Pompeo.  The government had said over the weekend that Anastasiades would try to secure US support for the rights of Cyprus to exploit its exclusive economic zone (EEZ) during his meeting with Pompeo as a warning to Turkey. The support Cyprus was seeking from the US is similar to that already expressed by the EU.

Though there was no specific mention of Cyprus’ sovereign rights to exploit its hydrocarbons within its EEZ in the final declaration on Wednesday, the reference to defending ” against external malign influences” could be interpreted as a signal to Turkey, which has been warning off foreign energy giants such as ENI, Total and ExxonMobil, operating in the island’s EEZ, and threatening to drill within the Republic’s blocks.

Anastasiades said prior to the meeting that the presence of Pompeo at this sixth trilateral summit, was tangible proof that the three countries constituted reliable partners for Washington, especially in the fields of energy and security.

Pompeo, in his statement before the summit, described Cyprus, Israel and Greece as “key partners” and said the US was looking forward to working with them and cooperating in the field of energy infrastructure.

He said he spoke a week ago in Houston, Texas to a large group of heads of energy companies about the opportunities that were being developed and about building a beneficial infrastructure to exploit those opportunities.

He added that the US and the three countries were working together to create an energy infrastructure. “If we do it properly we will attract investment and maximise these resources in a way that good infrastructure in free markets always brings about.”

Referring to the EastMed pipeline project, Anastasiades said the vision and actions of the three countries that aimed to create an Eastern Mediterranean energy corridor “is an excellent example in this respect.”

“I want to assure of Cyprus’ unwavering commitment to this reliable and solid partnership that aims, through tangible actions, to generate much needed security, stability and prosperity in our turbulent region,” he said.

“This is our grand scale vision and we are extremely happy that the Secretary of State is here to endorse its geopolitical value on behalf of the United States, and I look forward to a productive discussion on issues of common interest, such as energy security, full respect of sovereign rights and the protection of energy and marine activities, and, of course, the diversification of energy sources.”

An interstate agreement between the three countries on the pipeline was concluded last December during the trilateral summit, in Beer Sheva but any developments on this were not likely until after the European elections in May.

“We work in areas ranging from firefighting, to energy. We plan to create the EastMed pipeline from Israel and Cyprus, to Europe, which will provide stability in the region, prosperity for our peoples and provide alternative energy sources in Europe,” he said, adding that the presence of the US Secretary of State was important and “shows that the US supports this regional effort”. He also said the partnership would welcome not only the US but also other countries.

Greek Prime Minister Alexis Tsipras described the trilateral cooperation as “strategic”, especially in the areas of energy and security. He also welcomed US support for the cooperation, and the presence of Pompeo as it “strengthens efforts and dialogue on energy, security and the economy, as well as on the challenges ahead.”

Tsipras said the creation of the EastMed pipeline could also help the dialogue on security and economic development in the region as a whole.

France ready to do their job in Moldova, says Pogba