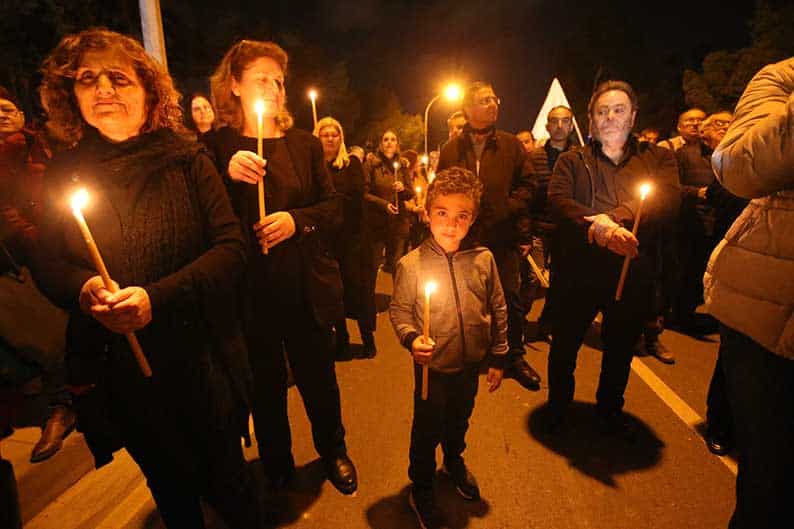 A CROWD of a couple of thousand people marched to the presidential palace on Wednesday evening to demand that the president and the government ensured the exemplary punishment of all those that were proven to have been linked to the collapse of the co-operative bank. This was the only rational demand included in the memorandum signed by more than 20 groups, including farming organisations, teaching unions, associations of retired public employees, policemen, army officers, mukhtars and schoolchildren.

The second demand, which was surreal in its absurdity, was “the undertaking of initiatives for the termination of the procedures for the sale of assets of the co-ops and the finding of a way in order for these to be given – including buildings, warehouses, packaging plants, factories, land – to its legal beneficiaries who are none other than the members of the co-operative credit institutions.” Is there nobody among the members of the 20 plus groups that signed this memorandum capable of rational thought?  It included all three teaching unions. The third demand made of the government was to give “practical support for the revival of the co-op movement”.

Had none of the signatories realised that the Cyprus Co-operative Bank to which all assets and liabilities the co-op credit institutions were transferred to in 2013 has gone bankrupt and all its assets have to be sold to cover a part of the €8 billion its temporary rescue cost the taxpayer? The members ceased to have ownership rights over the co-op assets since 2013 when the movement came under the ownership of the state, which paid €1.7 billion to save it from bankruptcy and protect deposits. The only legal beneficiary is the state which lost billions and now has to sell all co-op assets to limit the losses that have made the public debt almost unmanageable.

If we accepted, for the sake of argument, that the government decided to return all buildings, warehouses, packaging plants etc, who would take ownership of them? Would the members who never repaid their loans and thus contributed to the co-op collapse also be among the ‘legal beneficiaries’ to whom assets would be returned? And what would these people do with the assets, sell them and pocket a share of the proceeds? By this logic, Laiki’s shareholders should also demand they be given the buildings of the bank while its owner, the Bank of Cyprus, kept all the liabilities and NPLs, which is what these organisations are demanding from the state. Laiki’s shareholders have as much right to the bank’s assets as the co-op members have to the assets of the co-op bank.

Unions and associations are entitled to make as many irrational demands as they like; we live in a democracy. What is really worrying is that all the political parties embrace and champion this absurdity, ignoring the law and principles of good governance. It is no surprise that Akel, the par excellence exponent of irrationality in Cyprus, is at the forefront of this ignoble cause. Its spokesman, Stefanos Stefanou slammed the government on Wednesday for having already sold immovable property of the co-ops and insisted that the “real estate must go back to the real owner which is society”. This was another example of the idiotic slogans – society as the owner of real estate – resorted to by Akel.

What is even more worrying is that everyone is carried away by this wave of irrationality with nobody daring taking a stand against it. The government spokesman Prodromos Prodromou was apologetic, claiming the co-op real estate would be returned to the so-called ‘owners’, while the auditor-general Odysseas Michaelides, who wants everything to be done lawfully, has undertaken an investigation into the ceding of the co-op property to Kedipes, the company that has the responsibility of recovering the toxic loans of the co-op. Michaelides’ investigation has no real object other than to pander to Akel, because he knows that legal ownership of the assets of the co-ops belongs to the state.

The only person who did not succumb to the irrationality was the much-maligned finance minister Harris Georgiades, who openly told a House committee that property of the co-ops would be sold because the state must have revenue, especially after the €8 billion it spent on the controlled bankruptcy of the co-op. Georgiades was pilloried by the demagogues of Akel for stating what was blatantly obvious – and rational – for any sensible person. Unfortunately, it is the demagogues and populists that call the shots and prevent our society from growing up politically.

There are elections in less than two months, so the politicians will say anything, no matter how irresponsible to pander to potential voters. Even the Disy leader, Averof Neophytou embraced the trending irrationality giving assurances that co-op properties will be kept by the state “so it can give them back to the communities”. When Akel and Disy join forces to ensure the squandering of the taxpayer’s money, donating state-owned properties that should be sold to lower the public debt, there is little hope of rationality and common sense prevailing in public life.

Tales from the Coffeeshop: a feast for the East Med Draculas