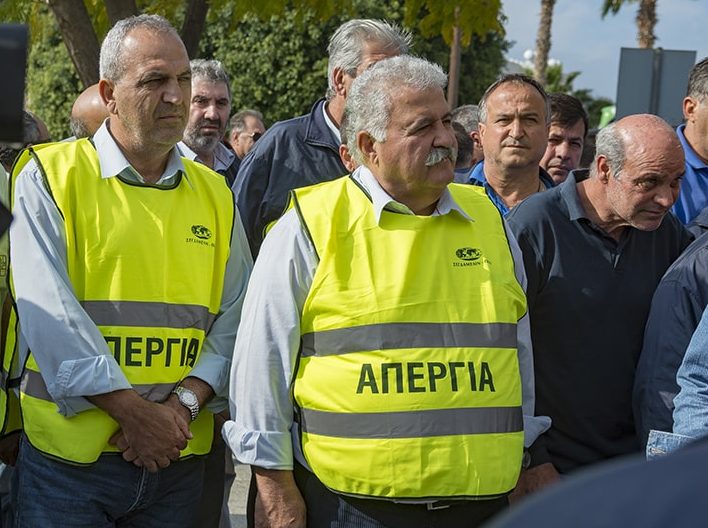 Drivers for the Limassol bus company Emel on Tuesday began an indefinite strike, starting from the morning.

Workers and their unions gathered near the old Limassol hospital to protest. Trade unions announced they decided on the stoppage after the workers’ March salaries were not paid.

Emel employees said that even if their March salary was paid, they would not call off strike measures until all outstanding sums from benefits cut since 2014 due to the financial crisis, were paid.

According to the regional secretary of Segdamelin-Peo union, Christos Christofi, in a general assembly last week Emel employees rejected a preliminary agreement for the return of a portion of the owed benefits, after which “both the ministry and the company were informed that the lump sum of benefits must be paid.”

The issue of the non-payment of March salaries then arose as well, Christofi said.

Speaking at the scene of the strike, the regional secretary of the Omepege-Sek union, Yiannis Tsouris, said that “once again we are unfortunately obliged, through strike measures, to claims things that go without saying.”

In its statement later, the ministry expressed its deep regrets for the decision of Emel employees to proceed with indefinite strike measures, and requested that they return to the table so that possible solutions can be discussed with the aim of restoring transport services to the public.

The bus company issued its own statement, confirming that while it seeks to actively participate in the dialogue with the ministry, it has yet to receive a response regarding two compromise proposals that it has already submitted to the ministry.

Bus strikes have been on and off across the island since late last year over non-payment of wages on time, though the strikes were soon called off after the intervention of the transport ministry which would mediate for the bridging of differences between striking employees and bus companies.

A similar development occurred this week with the Nicosia and Larnaca bus companies, which had initially planned to strike alongside the Emel employees, but whose strikes were called off following assurances by their respective companies that salaries will be paid by next Tuesday and outstanding contributions to the provident fund will be settled during the next few days.

However, the situation in Limassol will be harder to resolve.

“The nature of the problems in Limassol is complex and date back many years,” Tsouris said, “and this is the reason why it was not possible to find a solution during the past three days so that we could call off the strike measures.”

Workers are also determined to strike until an all-encompassing solution can be found: “we’ll push on with this struggle until the end, until the issue is permanently resolved,” Tsouris asserted.

In an announcement later on Tuesday, the confederation of parents’ organisations of public primary and secondary school students called for an end to the use of schoolchildren as leverage for the serving of interests of the parties involved in the strike, especially at a time when students are preparing to enter the “battle of exams.”

“Unfortunately, despite our appeals, no measure has been taken toward the resolution of differences and the cessation of strikes which affect students,” the confederation said.

“Who will finally think of the children?” the confederation of parents asked, expressing the hope that solutions will soon be found and strike measures will be called off, allowing the smooth continuation of the school year.

The biggest blow is suffered by students soon to graduate, who will next month be taking the Pancyprian examinations, the parents said, adding that the parties involved in the strike should “avoid any measures which will affect these exams and by extension the future of our children.”

The situation is linked with the decision by the transport ministry last year to claim back money it overpaid in the past to all six public bus companies, cutting the monthly subsidies which the companies in turn use to pay their employees.

Anastassiadou had said at the time the cuts would be made until all the money was recovered. The existing contracts between the companies and the government will expire in July 2020. The money should be returned by the time the contracts end, the minister had said.

The bus companies said after this decision that the slashed subsidy would lead them to the closure of services.

More Bauhaus events in the capital