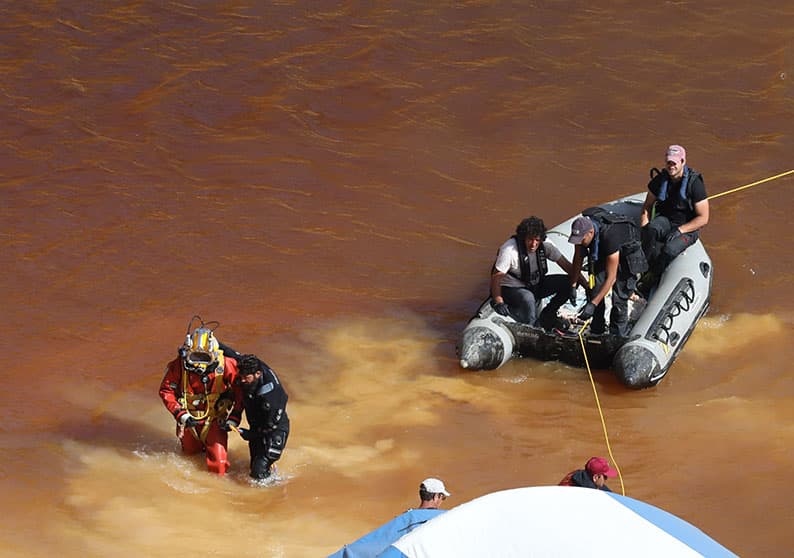 Search crews failed to locate a third suitcase, believed to contain the body of one of seven victims of a serial killer, in the Mitsero red lake on Monday, a day after a second case was retrieved with the remains authorities believe were those of Elena Natalia Buena aged 8.

The search will continue on Tuesday morning.

According to the suspect’s alleged confession, he threw three of his seven victims in the red lake; Romanian mother and daughter Livia Florentina Bunea, 36, and Elena Natalia who disappeared on September 30, 2016, and 30-year-old Maricar Valdez Arquila from the Philippines who went missing in December 2017.

A woman’s body was found in a suitcase brought up on April 28. It appeared she had been strangled from behind, subsequent examinations showed. The second suitcase was located near the first. A cement block was found close to the same spot last Wednesday that appeared to have been tied to the second suitcase to weigh it down. A similar block was found inside the first suitcase. Authorities believe the first suitcase probably contained the remains of the child’s mother Livia. The victims in both suitcases were fully clothed.

Authorities were hesitant Sunday to say definitively that it was a child’s remains in the second suitcase, but according to reports, once the bones were examined at the morgue, there was no doubt. A post-mortem was to be carried out to try and determine her cause of death.

The search continued on Monday to find what are expected to be Maricar’s remains but after almost eight hours it was called off for the day around 4.15pm when one of the locations earmarked through the sonar sweep failed to turn up a suitcase. A specialised diver spent 40 minutes underwater at the spot but came up empty. Reports said the sonar had outlined what could have been suitcase but it turned out to be rock.

Part of the search had been hampered by wind and rain in the area, which did not afford good visibility, but it had cleared up enough around 3.30pm for the diver to go into the lake.

The suspect’s confession allegedly says that Livia and Elena Natalia were his first victims in 2016. Five more murders were to follow with four of those carried out between May and August 2018 based on the dates the victims disappeared.

Five bodies from seven victims have now been recovered. If the first two bodies from the red lake turn out to be positively identified as Livia and her daughter, the remaining victim to be found would be Maricar.

One other unaccounted for victim is Sierra Graze Seucalliuc aged six, the daughter of Mary Rose Tiburcio, 39, also from the Philippines who was the first victim found on April 14. The suspect allegedly told police he threw Sierra’s body in Memi lake in Xyliatos but daily searches have not yet found any trace of her yet. The mother and daughter had been reported missing last May.

It was the discovery of Mary Rose’s body by a tourist at the flooded mine shaft that kicked off the investigation into what turned into a case of serial killings. Six days after Mary Rose was found, a second body was retrieved from the mine, that of Arian Palanas Lozano, 28 from the Philippines who went missing on July 21, 2018. She was only positively identified on Friday. The body of a woman believed to be Nepalese, Asmita Khadka Bista was found at Orounta on April 25. She had not been reported missing to police but the suspect allegedly told them he had killed her in the summer of 2018. According to police he met the victims on social media site Badoo.

Two investigations have been launched into possible police missteps in investigating the women’s cases when they were first reported missing. Justice Minister Ionas Nicolaou was pressured to resign and did so on Thursday while Police Chief Zacharias Chrysostomou was given the sack by President Nicos Anastasiades on Friday. A new chief and deputy chief were appointed on Monday by the cabinet.

On Sunday a protest took place in Limassol with a march starting at 2pm from GSO Molos to the centre of the town. Organisers said it was a memorial march against racism “for the victims of our indifference”. The march aimed at demonstrating public outrage and disbelief in the state “that left those women in despair”. Later Sunday afternoon another event was held near the mine organised by the Mitsero community and attended by local residents and others.

The suspect, army officer and erstwhile professional photographer, Nicos Metaxas, was remanded for a further eight days on Sunday by the Nicosia court where police introduced a new investigation into the alleged rape by the suspect of a Filipino woman aged 19 in early 2017.

Cyprus News Digest: What should the government do about the rising cost of electricity?