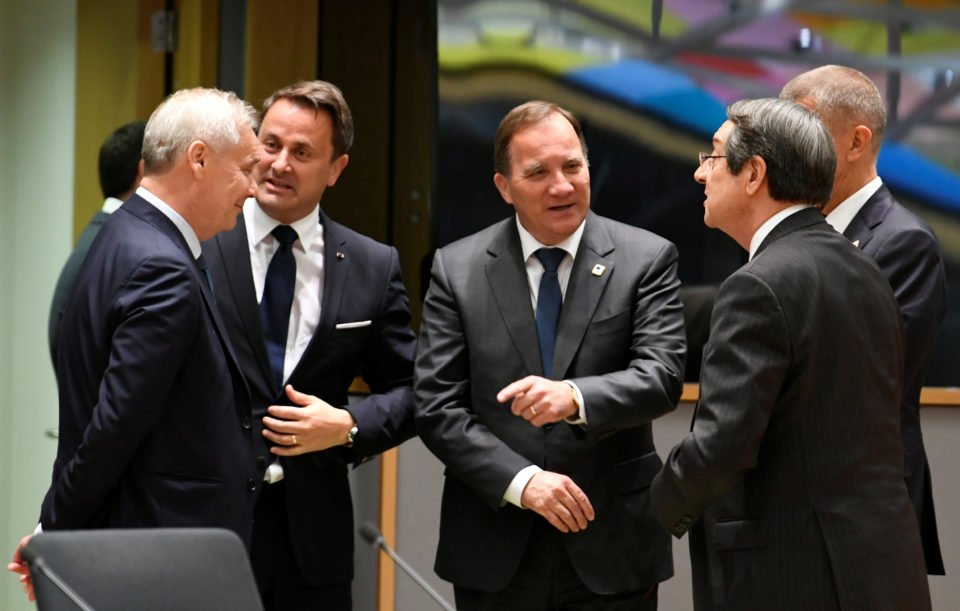 Targeted measures are to be taken on an EU-level against Turkey over its drilling activities in Cyprus’ EEZ, the Cyprus presidency said on Friday.

President Nicos Anastasiades said measures were not an end in themselves, but would work towards sending a message to Turkey that “if it maintains European inclinations, it will have to adjust to EU principles and values.”

The goal, Anastasiades said, was to terminate illegal activities in Cyprus’ exclusive economic zone and to resume negotiations to find a viable solution to the Cyprus problem.

He acknowledged that Nicosia has not been happy with the first draft of the conclusions on Thursday night. “And so we prepared the new text that was adopted as submitted,” he said.

Cyprus’ EU partners were convinced, he said, when they realised that Turkey`s words and deeds did not match, particularly after the dispatch of the second drilling ship in Cyprus’ EEZ, he added, referring to the Yavuz. The first drillship Fatih has been positioned off the west coast of the island since May. Ankara said drilling has begun.
Greek Prime Minister Alexis Tsipras said on Friday Turkey could face consequences if it persisted on a course of action challenging Cyprus’ right to explore for gas. “There is an upsurge in Turkish aggression, something we don’t only observe in the relations of Turkey with Greece and Cyprus, but also important countries like the United States, and with Europe,” Tsipras told reporters at the end of the EU summit.

The conclusions of the European Council summit stated that the EU had adopted the recommendation by Anastasiades for concrete support in restraining illegal Turkish drilling activities.

The announcement highlighted Anastasiades’ “utmost satisfaction” over the fact that beyond the affirmation of the conclusions of the General Affairs Council taken on June 18, the 28 EU governments unanimously voted to implement targeted measures against Turkey.

The move, the presidency noted, demonstrated that “illegal actions against a member-state will not be tolerated and will have specific consequences.”

The General Affairs Council invited the EC and the European External Action Service (EEAS) to submit “options for appropriate measures” against Turkey “without delay” due to the country’s refusal to conform with international law and EU calls for restraint with regard to its drilling activities.

What the specific consequences or targeted measures which are to be implemented by the EU will remain to be seen, as the Council’s decision on Friday only involved approval of the need to take measures against Turkey, effectively initiating the procedure of the submission of possible options.

“The European Council’s commitment to continue to closely monitor the situation and to launch targeted measures without delay constitutes practical support in defence of the sovereign rights of the Republic of Cyprus,” the presidency said.

In its conclusions, the Council expressed its sincere concern regarding the ongoing illegal natural gas drilling activities by Turkey and condemned the county’s refusal to comply with the EU’s multiple calls for termination of these activities.

The EC also underlined the severe impact these activities have on the full spectrum of EU-Turkey relations.

Anastasiades, answering journalists’ questions in Brussels after the summit, said the EU had gone from words to practical solidarity. The entire spectrum of EU-Turkey relations and any other kind of EU-Turkey interaction now depends on Turkey`s change of attitude.

He acknowledged at the same time, the difficulties vis-à-vis the EU’s relations with Turkey on the handling of the refugee crisis

“We have achieved the necessary legal framework leading to sanctions,” the president said. “The aim is to restore order and to end the illegal actions … the message is that if Turkey wants to continue it will have to normalise the situation and end illegal actions,” he said.

Opposition party Akel on Friday said that while the strong language used in the EC conclusions was positive, specific measures and sanctions to tackle the issue were not set out.

“For two months now, Anastasiades has been promising powerful sanctions which will force Turkey to terminate its provocative activities in the Cyrus EEZ, and has been saying that the last two summits were informal and that decisions would be taken during this one,” Akel leader Andros Kyprianou said.

Instead, Kyprianou said, “we got a general and undefined reference to the fact that measures must be drawn up… We cannot at this point be satisfied that measures will be taken if measures do not yet exist.”

Bus gutted by fire in Limassol