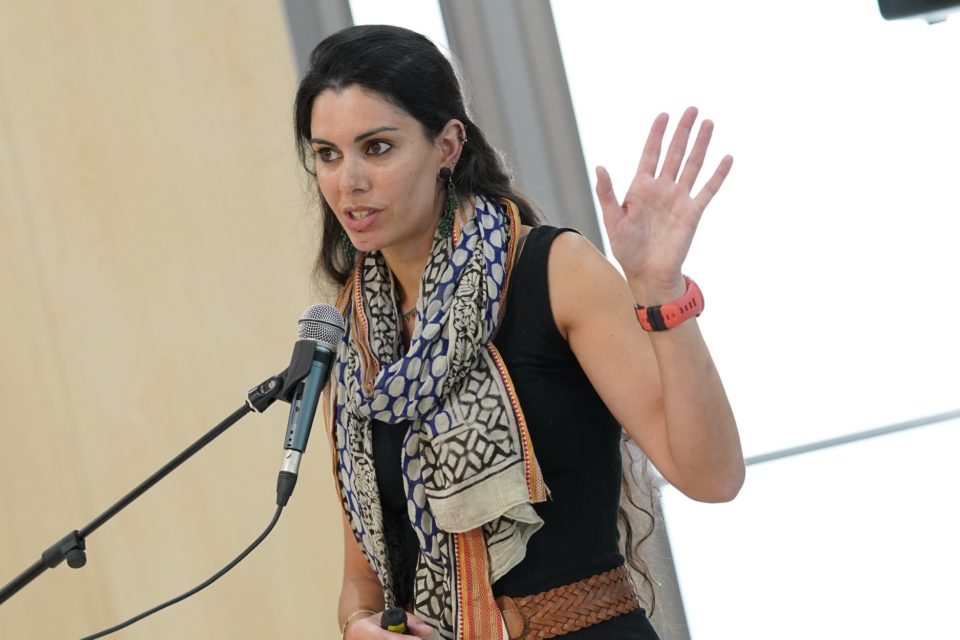 By George Psyllides and Peter Michael

GREEK authorities on the island of Ikaria launched an air, land and sea search on Tuesday for a 34-year-old British Cypriot woman reported missing by her Cypriot partner the previous day.

Astrophysicist Dr Natalie Christopher, who lives in Nicosia, arrived in Ikaria with her partner, 38, on Saturday.

Greek media reported that the couple was scheduled to leave for Cyprus on Monday.

However, on Monday morning, Christopher went jogging and never returned.

Her partner said he woke up in the morning and she wasn’t there so he called her mobile and Christopher told him she was out jogging in the Kerame Ayios Kirikos area.

After she failed to show up, her partner called her phone again but there was no response.

He then called the police to report she had gone missing at around 12.40pm.

Greek authorities launched an air, land and sea search for Christopher, focusing on rugged areas. A helicopter used in the search is equipped with thermal cameras.

A second helicopter was sent out later Tuesday afternoon.  Greek police spokesperson Theodoros Chronopoulos told state broadcaster Cybc Tuesday night: “From what we were told, they [the couple] spoke on the phone at approximately 10am, and she told him that she went for a run in the area.” He added that police, firemen, the port authority, and a helicopter was launched immediately.

Reports said the missing woman’s phone was still on, prompting her sister to ask people not to call her to preserve the battery.

“If you have her phone number please DO NOT call her. As this will drain the battery and the police are trying to use her phone to find her location,” Jena Christopher said on Facebook.

Reports said the radio signal emitted by the phone was picked up by a cell tower located on an island opposite Ikaria, but authorities believe it was due to interference.

Greek media said authorities were contemplating switching off the tower on Fourni island in a bid to get a clearer location of the phone.

The owner of the hotel the couple were staying in said police sealed-off the room and Christopher’s partner was staying with him at his house.

“He is a very good lad, he’s from Cyprus. He’s lost it, he has panicked, he cannot believe it,” the man told Greek media.

It was also reported in Greece that a small amount of blood from what appeared to be a nosebleed was found in the hotel room but police would not confirm the reports. They also reported that Christopher’s phone gave off a signal on Tuesday after having been turned on, something authorities would also not confirm, according to the Cyprus News Agency.

Meanwhile, social media has filled with images of Christopher and a post calling for people to contact Greek police if they know anything.  Her friends spoke to Cybc on Tuesday night saying that they were really worried about her, adding she was very involved in the social fabric of the island.

One friend, Saskia Constantinou told Cybc: “We are very concerned that she is missing in Ikaria, and we hope that she will be found very, very soon.”   Constantinou also posted on social media saying: “ALSO – anyone in IKARIA who is able to be part of the search party – CONTACT the POLICE in Ikaria – tel.+30-2275 051222 ONLY if you see her. DO NOT WASTE her battery and call her! or leave a message below.”

The Cypriot embassy in Greece is also in contact with Greek authorities to provide any help that may be necessary.

A spokesperson for the Foreign Office in London told The Telegraph: “We are assisting the family of a British woman reported missing in Ikaria, and are in contact with the Greek authorities who are conducting the search for her.”

At least two groups of volunteers from Cyprus were also looking to go to Ikaria to join the search.

Former fire service chief, Marcos Trangolas said that he was approached by seven of Christopher’s friends, asking him to lead them in a search.  Trangolas said they were looking for eight air seats to Greece.  He added that volunteers would be funding the trip themselves.

The sporting group ‘Cyprus Trail Runners’ ran a crowdfunding campaign on Tuesday to raise money to send an experienced trail-runner.

The group said they raised €3,000 in a matter of hours and that they would be sending two runners to Ikaria, Angelos Savva, and Andreas Djakouris.  Djakouris, the group said, was an experienced trail-runner and also experienced in search and rescue operations.

“They now hope to be on their way using commercial flights early tomorrow [Wednesday] morning. The amount raised will easily pay their airfares as well as meet their accommodation costs,” the group said.

Christopher is a member of the group and involved in many social projects.  She is one of the co-creators of the sporting group Cyprus Girls Can, which seeks to bring girls together from both communities through sport.

The Oxford-educated Christopher’s field of study at the European University in Nicosia is related to developing “our understanding on the evolution of galaxies, by fitting models to data collected from telescopes and satellites.”

Remand for company employee in Paphos suspected of embezzling €3,000

Our View: Georgiades acts as a bulwark against the economic lunacy of the parties

Coronavirus: 90 per cent of state schools now offer some form of e-learning