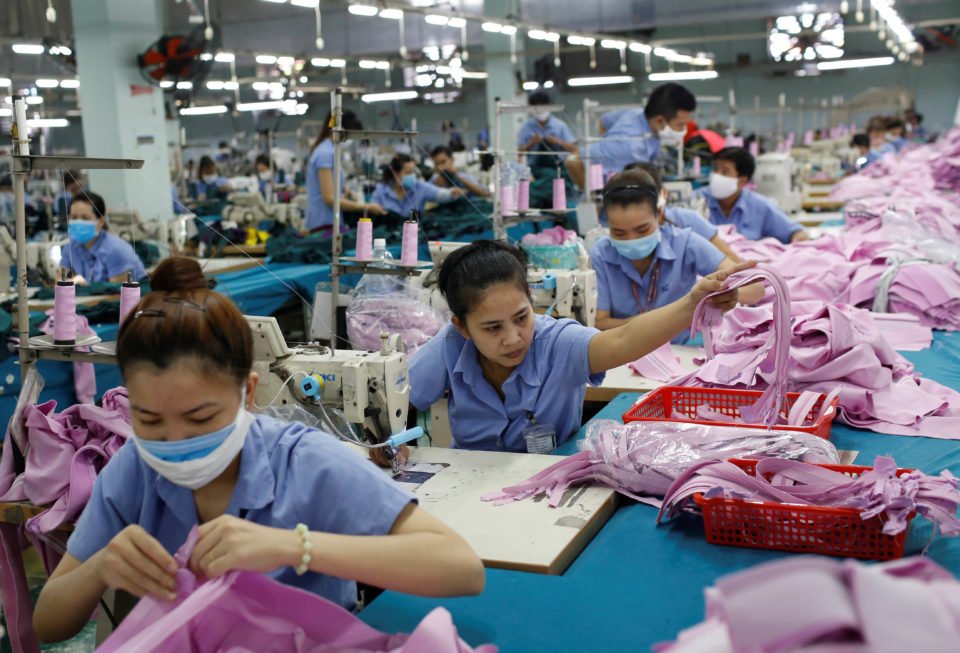 “The EVFTA is the game changer that will pave the way for Vietnamese garments to dominate the European market,” Tung said amid the clack of thousands of sewing machines in the metal-roofed factory on the outskirts of Vietnam’s commercial centre.

Analysts say garments worth around 10 per cent of Vietnam’s exports and currently subject to EU tariffs of around nine per cent, will be by far the biggest beneficiary of the EVFTA finalised last month.

Tung expects orders at his factory, which produces company uniforms and sportswear, to increase by at least 15 per cent once the EVFTA, which will reduce duties on nearly half of all garment products to zero, is ratified by the European Parliament.

Vietnam, backed by more than a dozen free trade agreements, has emerged as a key link in the global manufacturing supply chain.

That capacity, however, is being tested by growing demand – both from the EVFTA and the global disruption of trade caused by the US-China trade war which has seen some manufacturing shift from China to Vietnam and other nearby countries.

Staff shortages have already started to manifest in Vietnam’s garment industry, where the vast majority of manufacturers are focused on the labour-intensive sewing and cutting process which makes the Southeast Asian country a popular outsourcing destination for foreign fashion companies.

Low pay and long hours are making it hard to meet the new factories’ growing demand for workers, which has increased by seven per cent since 2018, according to Ho Chi Minh City-based recruitment firm Navigos Search.

For TCM’s Tung, who is poised to open a new dyeing plant to keep up with orders, this means embarking on the difficult task of finding a chemical engineer who can lead his next operation.

“Finding people to operate dyeing or weaving machines is easy. They are workers, and we can train them,” said Tung. “But finding experienced chemical engineers with a thorough knowledge of chemistry and dyeing is rare”.

“I can count them on one hand,” Tung added.

The EVFTA presents another challenge for Vietnam’s garment industry: Strict rules on the country of origin for materials – or the “double transformation” of goods.

For manufacturers like Tung, this means both the textile and the finished product itself should be Vietnamese or from a country with which the EU already has a free trade agreement in order to be tariff-free.

That’s in part because of strong lobbying from European manufacturers who are already struggling against cheap imports from the likes of China.

At a 2013 hearing, European garment manufacturers expressed concern that an FTA with Hanoi could pave the way for cheap Chinese textiles to enter the European market after being transformed into garments in Vietnam.

Italian textile manufacturers and the European Apparel and Textile Confederation (Euratex) acted during the negotiations to prevent Chinese products that had undergone a finishing process in Vietnam from entering the EU without duties.

They also fought to delay the removal of duties for a certain period of time after signing the deal to prevent a sudden flood of Vietnamese products into the European market.

“In conclusion, considering the starting conditions, we were able to contain any damage,” Sistema Moda Italia, the federation of Italian textile and fashion manufacturers, said in a statement.

Currently, nearly 70 per cent of the raw materials used in Vietnamese garment manufacturing are sourced from overseas, especially China, according to official data. Clothing makers in Vietnam say few can afford the expensive process of producing their own raw materials.

“We have no intention of investing in dyeing… It’s capital-intensive and requires highly-skilled workers to operate,” the owner of a small Ho Chi Minh-based factory of around 800 employees told Reuters.

“Importing is cheaper, simpler and faster for small firms like us,” said the factory owner, who declined to be identified.

The factory, tucked in an industrial zone about 20km from the city centre, produces mostly women’s apparel and says Germany is its largest export market.

“The issue of ‘point of origin’ is important for us. We are considering importing materials from South Korea, which has already established free trade relations with the EU, instead of from China,” the owner said.

“The higher costs mean less profit for us, but it’s the best alternative way we can think of at the moment.”