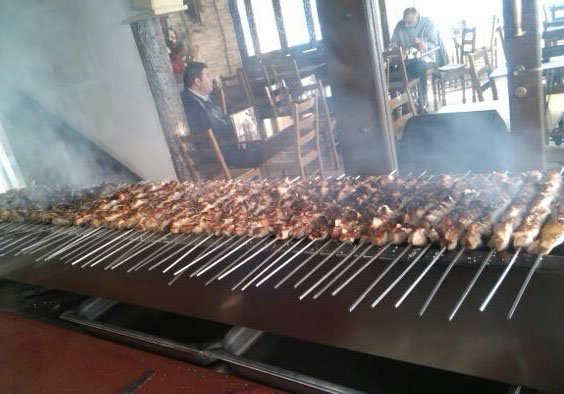 While it’s always a treat to go and sit by the sea at a plush restaurant and order gourmet food sometimes all you need is something simple without all the bells and whistles.

In the centre of Larnaca you can find Takis Kebab house. A family run restaurant, Takis has been operating since 2003 and prides itself on offering the traditional taste of Cypriot food.

Despite being called kebab house, Takis offers a lot more than that. On the menu there’s a whole host of dishes that can be cooked on a grill – pork chops, lamb chops, chicken breast and livers to name but a few. For those who don’t fancy a meat dish, there is also a small selection of fish dishes and a couple of pasta dishes.

The walls of the small inside area are decorated with pictures of Larnaca 50 odd years ago and with traditional, old school farming and baking equipment. And for those cold winter days when you want to sit inside, there is a lovely looking fireplace.

Being a hot summer evening, we opted to sit outside as the restaurant is all open and there is no airconditioning inside. The tables are right on the roadside and despite the odd waft of fumes every now and again, it was quite cool and comfortable.

As we sat looking at the menu, the tantilising smell of souvlakia being cooked on the grill only a few metres away really whet our appetites. In the meantime, a waiter came over to place an ash tray on our table. We told him that we don’t smoke and won’t be needing it. His response was to shrug his shoulders and say ‘it doesn’t matter’ and proceed to put it on the table anyway. Only moments later, a waitress came and stood on top of us without saying a word. As we hadn’t decided what to order it felt a little awkward and we had to ask her to leave as we needed a little more time.

Having previously had take away souvlakia from Takis, and thoroughly enjoying it, we all decided to go for something different. A different waitress spotted that we were ready and came over. She was extremely polite, friendly and helpful. We ordered two portions of grilled lamb chops and a portion of chicken, bacon souvlaki which is chicken souvlaki marinated in mustard and yoghurt, wrapped in bacon. Both are served with salad and chips.

While waiting for our food we were brought out a starter of warm, soft, fluffy pitta breads with some pickles, tachini and olives ‘tsakistes’ – preserved in oil with crushed coriander and garlic. The olives had a very strong taste of garlic, so maybe best to steer clear of them if you’re on a date! Another plus point to the evening was when our drinks arrived. Ice cold beers and glasses that had been cooled. Perfect for a summer evening.

The food arrived shortly after and we couldn’t wait to tuck in. The serving size of the lamb chops was average and while some of the meat was juicy and cooked well, unfortunately, some of it was quite chewy. Having previously enjoyed kebab from Takis, we were a little surprised to see that the chicken pieces in the chicken bacon dish were very small and its taste was over whelmed by the bacon wrapped around it. What sounded like it would be a special dish turned out to be somewhat of a disappointment. Additionally, the chips were a little undercooked and a little cold.

If you’re down in town and want a bite to eat or have worked up an appetite after a day at the beach, Takis is a good choice but, is more likely to be a much better experience if you stick to what he does best and get yourself a kebab.

EU have always been firm about the deal on offer