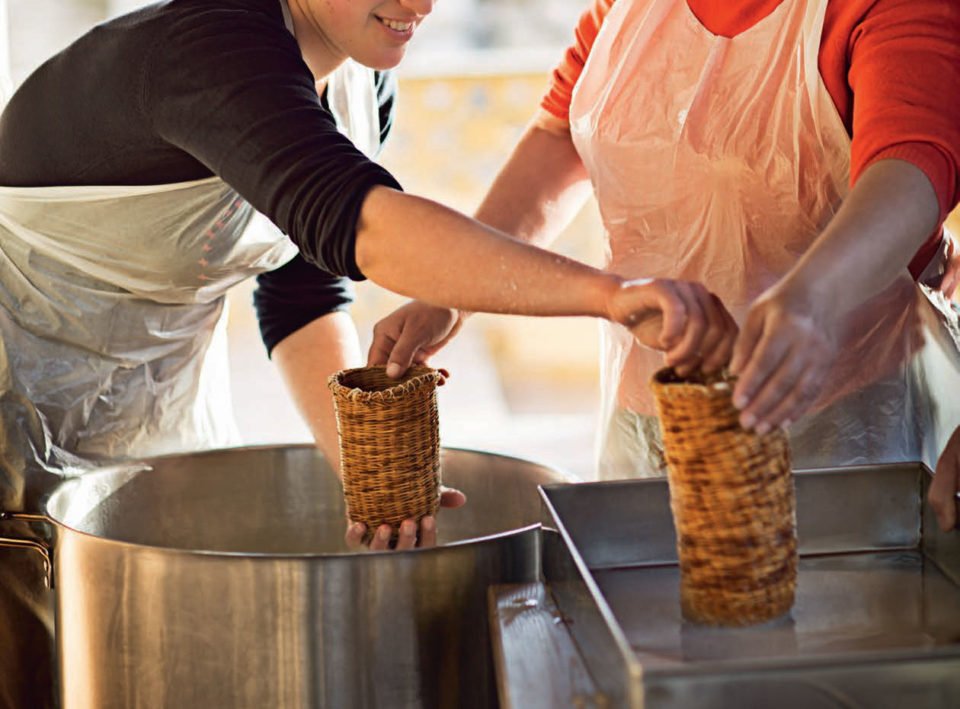 Dimitra Themistocleous is waiting for us at the side of the road, with an armful of flowers. Wild orchids. Aren’t they protected? “Well, the goats eat them as well.” Dimitra has a herd of around two hundred goats. The kids are just a few weeks old, so it’s not really time to be making cheese. The mothers’ milk is needed for their young during these weeks. Only once they start to nibble grass and flowers can Dimitra and her daughter Elena get back to making halloumi. But this morning, the two women have funnelled off a few litres of the precious milk to show how the famous ‘squeaky cheese’ is traditionally produced. Because it is only real halloumi if it produces a high squeaky tone between the teeth when you chew! And when you add mint. But one thing at a time.

Dimitra’s house is located in Statos-Ayios Fotios, a village situated half an hour’s drive north of Paphos. It is situated very close to the Chrysorrogiatissa monastery at a height of around one thousand metres. Nearly all of the streets are lined with walnut trees. “They were planted by order of Archbishop Chrysostomos I; he came from Statos,” Dimitra – who is married to the village priest – tells us. Meanwhile we are sitting together around her dining table and our bowls are steaming with a delicious, thick soup: chicken broth with trahanas. These ‘noodles’ out of shredded wheat and goat’s milk were already being made in ancient times. In Cyprus they only make the ‘sour’ variety using fermented milk. And before it dries, the mixture is formed into wide, finger-length triangles or ovals.

After dessert, Dimitra and Elena return to their cheese. “The halloumi-making season begins in May, but the best time is summer, when the animals only find dry food to eat. That makes the milk more concentrated.” Two thousand years ago the milk came only from wild mouflon; nowadays cow’s milk as well as sheep and goat’s milk is used to make halloumi.

Elena ladles the carefully cut-up cheese curd into tall, narrow little baskets. Today they are usually made of plastic “because of EU regulations”. In the olden days they were made out of raffia, and they had to be watered, “otherwise they were unstable and fell over”. Elena now presses the curd firmly down into the baskets. After a resting period she returns the curd cheese to the whey. She flavoured the cheese with salt and mint, folded once and pressed together, which results in its typical form with a slit in the middle.

Anari is a by-product of the halloumi making process, but this cheese mixture has to remain soft and loose in the basket. Later we try it with a few drops of carob syrup. “Mature anari is good for grating,” Dimitra tells us, and gives us a few recipe suggestions, also for halloumi, which is rarely missing from a typical Cypriot breakfast. “In summer we eat it with melon – and otherwise in salads, as a filling for dumplings and pies or simply grilled.” 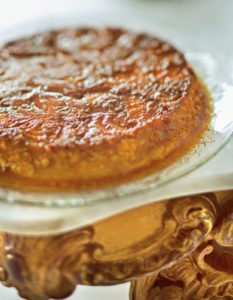 200g sugar for the caramel

For the caramel, melt the sugar over a medium heat until it takes on colour, stirring occasionally. Put the caramel into a 25cm round baking dish and spread it so that the bottom is covered. Leave to cool.

Peel the apples, remove the apple cores and cut into slices. Lay the apple slices on the caramel so that they overlap slightly.

Mix the anari with icing sugar in a blender. Add the eggs, cinnamon and vanilla sugar. Finally add the cornflour and milk. Pour the mixture over the apples.

Bake at 160C in a fan-assisted oven (or 180C with upper and lower heat) for about 40 minutes. Leave to cool, turn out on a platter and serve.

Recipes by Marilena Joannides. Available from local bookshops and Amazon