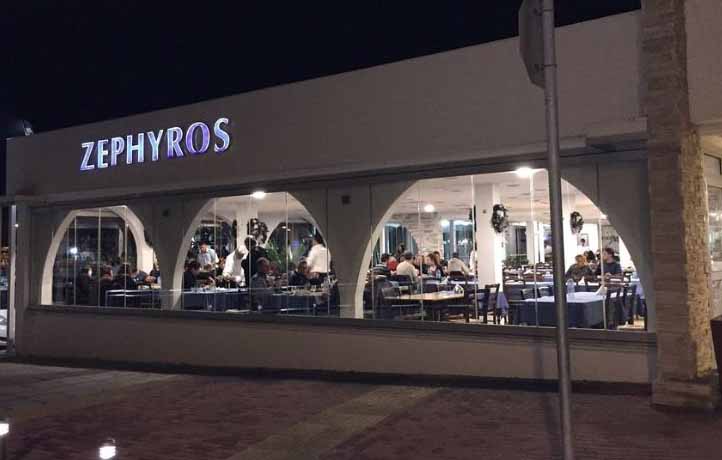 One of the luxuries of living by the coast is that you can enjoy quality fresh fish at a multitude of restaurants, including Zephyros, sitting right on top of Larnaca’s fishing harbour. And it has certainly stood the test of time as they are still thriving after opening in 1976!

I went with my family for a spot of lunch on a hot Saturday afternoon. Upon entering the first thing we noticed was the noise! Being Saturday lunchtime, the restaurant was packed to the rafters so it would be unrealistic to hope for a quiet lunch. The crowd was a mixture of tourists and locals.

The tables were well laid out and covered with deep blue table cloths. The chairs were wooden and had traditional wicker work seats (actually quite comfortable). As expected, the inside was air conditioned and while some restaurants have the air conditioning on a freezing full at Zephyros, the temperature inside the restaurant was just right.

Just outside, there is a small designated area for smoking with tables and chairs.

We were lucky enough to find a table away from most of the crowd and by a window so that we had a lovely view of the sea. The menu is plentiful. Despite being mainly a fish restaurant, there are also many meat options available. I was also impressed to see that the menu had a key at the front, outlining potential allergens in the food.

The waiter who served us was a young chap. He was friendly and offered suggestions to help with our order. I shared a fish meze with my brother and my parents ordered grilled octopus, fresh kalamari and a serving of chips to share.

The food started flying out of the kitchen! It felt as though the salad and dips for the meze came out almost immediately! We were actually quite impressed as the dip portions were very generous indeed! We were a little confused when the individual pieces of the meze started to come out such as the shrimps and the mushrooms. There were four of each when usually it is one piece per person. We thought there had been a mistake and confirmed with the waiter we had only ordered meze for two. We were pleasantly surprised to be told as there were four of us they added extra so that all of us could have a taste. This also explained the huge servings of dips at the start!

The octopus and the kalamari came out. The kalamari was soft on the inside but still had that crisp exterior. The octopus wasn’t hot when it came out, almost as though it had been cooked and left standing in the kitchen waiting for other dishes to be made so that it could all be brought out together. The chips, although tasty, also were just about warm.

The rest of the food for the meze was fantastic. The cuttlefish was soft and succulent, the sea bream was cooked perfectly and they did a good job of deboning the fish! It was served with a lemon and oil dressing. I was in two minds as to whether I should use it as the fish tasted so good served as it was!

After everything was cleared we were brought out a plate of various fruits preserved in syrup. The watermelon seemed to be everyone’s favourite but we enjoyed all of them.

As we got up to leave the waiter rushed over to open the door for us and personally thanked us for leaving him a tip. Little things like that all contributed to enhancing our experience at Zephyros.

Head of European representation calls for action on plastic