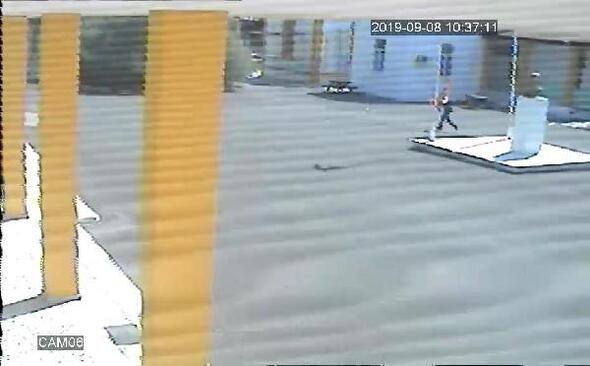 A 16-year-old Greek Cypriot is wanted by Turkish Cypriot police for taking down a Turkish flag from a primary school in the village of Lysi in the north on Sunday, when thousands of original residents and their families flocked to the church there for the first service in 45 years.

News emerged on Thursday that the 16-year-old slipped away from the service attended by around 2,000 Greek Cypriots from the village who had been warmly welcomed by Turkish Cypriot residents.

CCTV footage shows a figure, believed to be the 16-year-old, taking down a Turkish flag hoisted at the Lysi primary school, located roughly 100m from the church.

The 16-year-old then reportedly entered the school building and took a photo of the former Turkish Cypriot leader Rauf Denktash, taking both items – the flag and the photo – with him to the government-controlled areas.

Snapshots of the CCTV footage depicting the incident, reminiscent of the tragic endeavour of Solomos Solomou in 1996, made the rounds of social media and news reports on Thursday.

According to Turkish paper Hurriyet on Wednesday, authorities in the north are looking for the teen.

In response to the incident, reports claim that Turkish Cypriot ‘Prime Minister’ Ersin Tatar will attend the flag hoisting ceremony of the school during the first day of the new academic year next Monday.

Lysi mayor Andreas Kaouris told media on Wednesday that “the tsunami of love, with the massive descent of thousands of people from Lysi, cannot be overshadowed by any frivolous act of a 16-year-old.”

Pantelides tweeted that what the teen had done was “a brave, brash and risky act against the symbol of the occupying country in an occupied town. Well done to him.”

The tweet prompted a backlash with social media users reproaching Pantelides for encouraging such behaviours among teenagers.

“Tell that to the mother of the next one on the day of his funeral,” was the response of another Twitter user.

According to one of the commentators the 16-year old has regretted his actions and wants the issue to be over. “Why do you push him to greater risks?” the user asked.

One Twitter user asked if Pantelides was a member of the Greek far-right party Golden Dawn, while another one called him an “irresponsible, frivolous populist.”

Parthenon sculptures will never be returned

Plant of the week: ‘Friend of the elderly’ was thought to cure plague