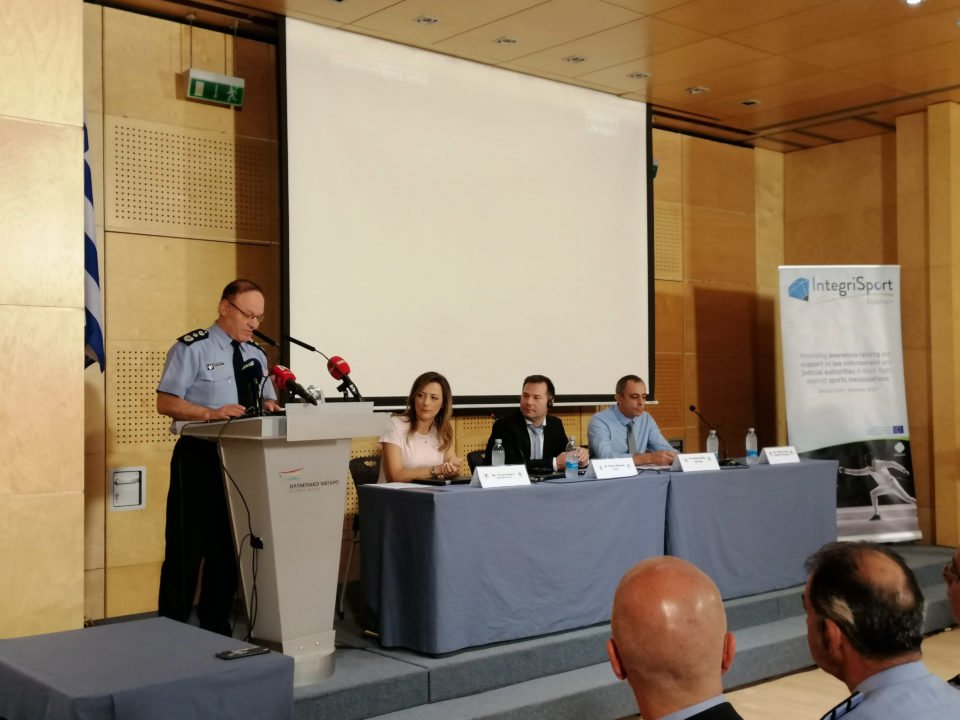 Chief of Police Kypros Michaelides speaking at the conference in Nicosia

Legislation against match-fixing in Cyprus is badly needed, Police Chief Kypros Michaelides said on Wednesday, calling for greater surveillance powers for the force as the phenomenon is most often linked to organised crime.

Michaelides was speaking at the official launch of a three-day project aimed at raising awareness on the best practices to use in the fight against sports manipulation. The conference is taking place at the Cyprus Olympic House in Nicosia.

The project, called IntergriSport Erasums+, is co-funded by the European Union and offers help and support to law enforcement and judicial authorities in their fight against illegal betting, match-fixing and other issues related to the sports manipulation sphere.

Michaelides and Chief Inspector Chryso Angeli both addressed the opening and vowed to step up the police effort to stop match-fixing in Cyprus, for which there are growing reports of such incidents happening within sports on the island.

“Sport is at risk all around the world and this includes our country. It is our duty as police officers to find the people who are ruining sports and hold them responsible,” said Michaelides.

“Match-fixing is strongly linked to organised crime, especially in football. The sooner we find solutions, the better it will be for football in Cyprus.”

The Chief of Police, however, pointed out how there were still important issue to solve before a solution is found. “We currently have no legislation against match-fixing and we need it badly,” he added.

“We should be able to record and listen to phone calls people suspected of criminal activity. The fact that we still cannot do it makes our job much harder, this needs to change.”

Cypriot authorities have never prosecuted anyone for match-fixing, arguing they are unable to secure proof. They did not achieve much with evidence provided by a former referee, Marios Panayi, in 2014.

Panayi had handed authorities recorded conversations, documents, and other evidence exposing people within the CFA as the ones “running the show” when it comes to local football.

However, it is understood that the manner they were secured, which appeared to be unlawful, along with the authorities’ apparent failure to corroborate the allegations, led to a dead end.

Angeli, in his address to the conference said: “I didn’t know much about sports manipulation and its severe consequences. This is why we as police force welcome this project with open arms.”

He added: “There is a lot of room for improvement in this fight and we are striving to keep sport clean in every aspect.”

He said the police were currently cooperating with the Cyprus betting authority, the football association and the referee association.

The ministry of justice was also represented at the conference by Ani Orfanidou, who spoke on behalf of the government, saying the state had the obligation of protecting the sport and creating an attractive product, something that Cyprus was currently struggling with.

“Sport manipulation is not just match-fixing, it’s also money laundering and we will help the police by facilitating their work to bring criminals to justice,” she said.

Rubicsek praised Cyprus for its effort in tackling the issue. “It’s good to see the police and the government of a country so involved in the fight against sports manipulation,” he said.

He said that over the three days they would have closed session with the police to help them identify current and potential future problems related to match-fixing, illegal sports betting and money laundering. “The police deserve the best tool in this fight,” he said.

The project will run until December 2020 and will involve other European countries as well, such as Portugal, the Netherlands, Slovakia, Finland and Lithuania.