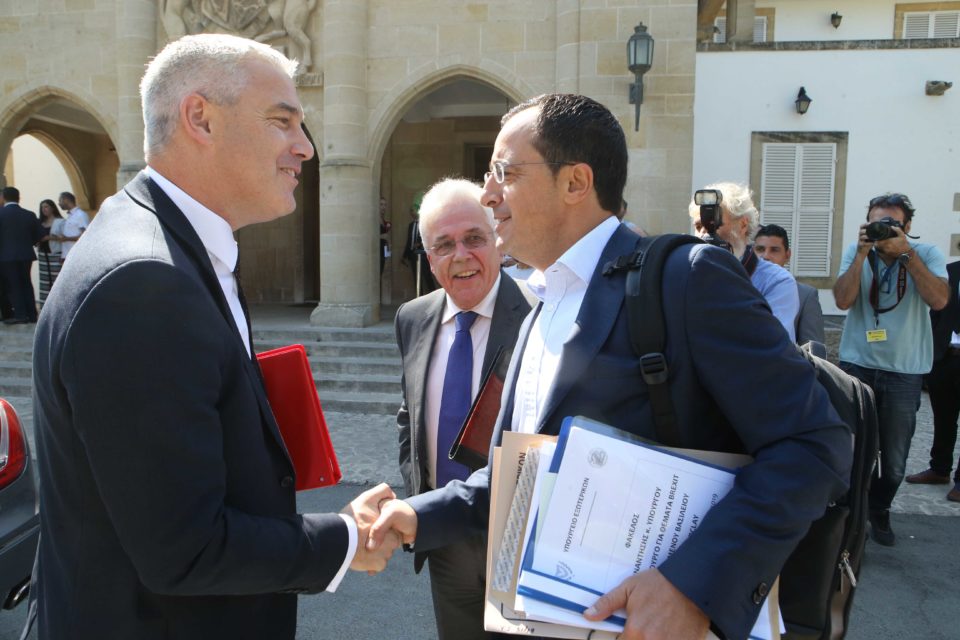 A Brexit deal is in the interests of both UK and Cyprus, which share significant business relations, as a potential no-deal scenario would have “disruptive” consequences for both economies, UK’s Secretary of State for Brexit Stephen Barclay said in an interview with the Cyprus Mail on Wednesday.

“The UK has a very strong bilateral relationship with Cyprus,” Barclay said, highlighting that both President Nicos Anastasiades and Foreign Minister Nicos Christodoulides, with whom he met earlier on Wednesday, share the UK government’s desire for an exit deal.

“The president recognises that a no-deal outcome would be damaging to both economies,” Barclay said, warning that several issues would need to be addressed for both sides to protect themselves from the consequences of such an outcome.

These consequences, he explained, weigh heavily on the business sector, major players of which Barclay met later on Wednesday.

For example, Barclay said that in the event of a no-deal Brexit, the EU has drawn a red line on the sharing of data between EU member states and the UK, even though the UK has fully adopted the data regulations laid out by the EU.

This would mean that “businesses here [in Cyprus] will not be able to share data with the UK and that would be damaging to the tourism industry”, Barclay said.

Detrimental effects on the tourism industry may also emerge from the potential negative impact on currency valuations as a result of a no-deal, he said.

Barclay’s comments justified the sounding of the alarm by hoteliers and other players in the tourism industry on Tuesday, who fear the adverse impacts of a hard Brexit on the island’s tourism.

The UK was the main source of tourism for Cyprus in August 2019, accounting for 33.6 per cent of arrivals.

“There are no more bookings for 2020,” the chairman of the Cyprus Hotel Association (Pasyxe), Haris Loizides, had said. “The British market, which is also the biggest for Cyprus’ tourism, is going through one of its biggest crises,” he added.

A hard Brexit would also mean that UK tourists travelling to Cyprus would not be allowed to use e-Gates, though Cypriots travelling to the UK will not face this restriction, Barclay said.

Locally produced halloumi cheese, 44 per cent of which is exported to the UK, would also be on shaky ground come a hard Brexit because the European Commission has left any mini-deals between the UK and EU members out of the question.

A deal would also protect other business sectors such as the car industry, as cars imported from the UK form an important part of the local market, Barclay noted.

Also on the line in the event of a UK exodus without a deal would be professional qualifications obtained from the UK.

“Around one per cent of the Cyprus population at any one time is studying in the UK and obtain professional qualifications, but we don’t want a situation where the Commission say the Cypriot nationals can’t use those qualifications elsewhere in Europe because they wouldn’t be recognised,” Barclay said.

Barclay said that the UK has taken a generous stance and guaranteed that it will recognise EU qualifications, “but it’s important Europe matches that commitment”.

A deal would protect all potential disruptions, Barclay asserted. The UK Prime Miniter Boris Johnson “is absolutely committed to getting a deal, ensuring we leave on October 31 and the president also reinforced his personal support for ensuring we leave with a deal.”

In a telephone call with the Johnson on Wednesday evening, Anastasiades reiterated the support of the Cyprus government for efforts towards an orderly withdrawal from the EU. Anastasiades was also briefed by the British PM on the latest Brexit developments.

“We are sufficiently prepared for every scenario,” Finance Minister Harris Georgiades said on Wednesday, noting however that “a withdrawal without a deal would be, without a doubt, a negative development.”

But this possibility has to a great extent become the most likely scenario, he said, noting that across Europe, businesses to a greater or lesser degree have made preparations for a no-deal Brexit.

Olympiakos hit back to draw 2-2 with Tottenham