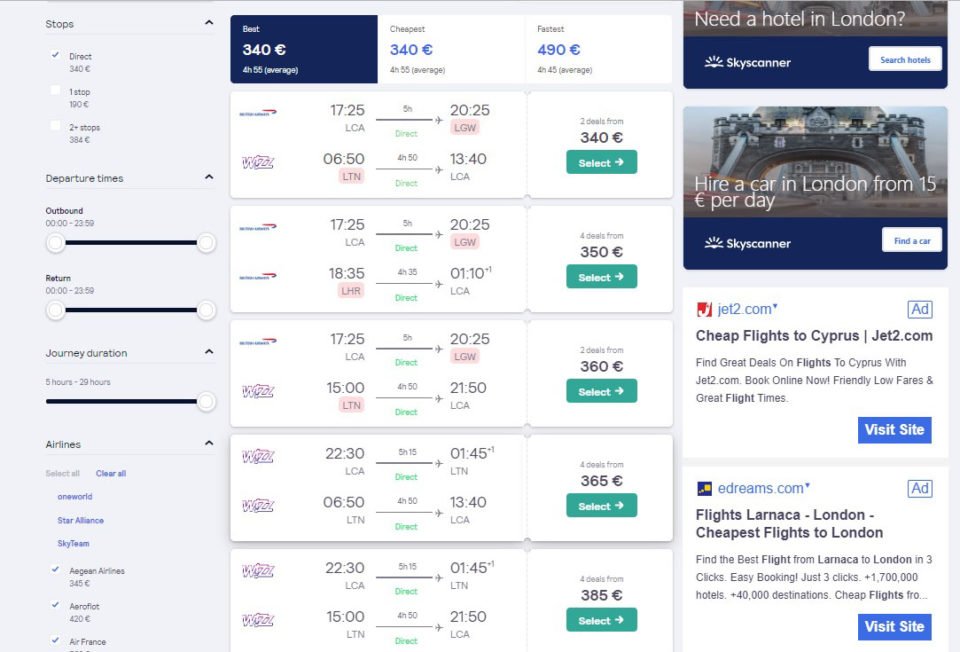 Air fares have suddenly jumped for October by as much as 60 or 70 per cent, the Cyprus Consumers’ Associations said on Tuesday as countless reports abound abroad of travellers feeling ripped off in the wake of the Thomas Cook collapse.

Deputy Minister for Tourism Savvas Perdios warned on Monday after the collapse of the company that this could happen in the short term. However, if tourists cannot afford to travel to Cyprus due to hiked fares, the island’s tourism could be further damaged by the Thomas Cook collapse.

According to one British report, one traveller said that between 7.30am and 11.30 Monday morning, a ticket to Cyprus from the UK with Jet2.com increased by £800. UK media reports quoted a spokeswoman for Jet2 responding: “Our pricing, as is common practice in the travel industry, is based on the principle of supply and demand. As supply reduces, an inevitable consequence is that prices increase. However, we are looking at adding more supply (flights and seats) to help customers at this time.”

The Daily Mail reported that a week in Cyprus for a family of four with Tui, which had been listed at £1,240 per person changed within an hour to £1,297 per person.

The issue is not unique for holidays to Cyprus. The BBC reported that people who booked flights with Thomas Cook and were now trying to find replacement flights, found in some cases prices for the flights had tripled. One holidaymaker told the BBC that a flight from Glasgow to Rhodes, Greece, was £280 on Sunday, but was now £1,000.

The same phenomenon was seen when Cypriot airline Cobalt collapsed last year, and in other such instances as airlines jump in to fill the gaps in the market. Authorities always reassure consumers that the effects will be short term.

Speaking on CyBC on Tuesday, the consumer association’s president Marios Drousiotis said that in July a departure on October 14 and a return on October 20 to Athens, prices started at €119.  Today, for the same days of departure and return the price was €191, an increase of over 60 per cent. The same was true on the Thessaloniki route, he said with a ticket price now standing at €223 from €134 if booked July for dates next month.

London fares, he said were even more expensive. What could have been booked in July for October travel dates for €197, is now €345. Drousiotis said the increases were not normal because October is not a peak month for travel and fares would ordinarily be cheaper at that time of year.

“In non-peak times the impact on prices should be minimal and this is not justified,” he said, adding that the same thing had happened with Cobalt.

A quick look at price comparison sites on Tuesday shows direct flights to London from Larnaca for next week, starting at around €340 and up.

Dangerous children’s clothing to be removed from shops