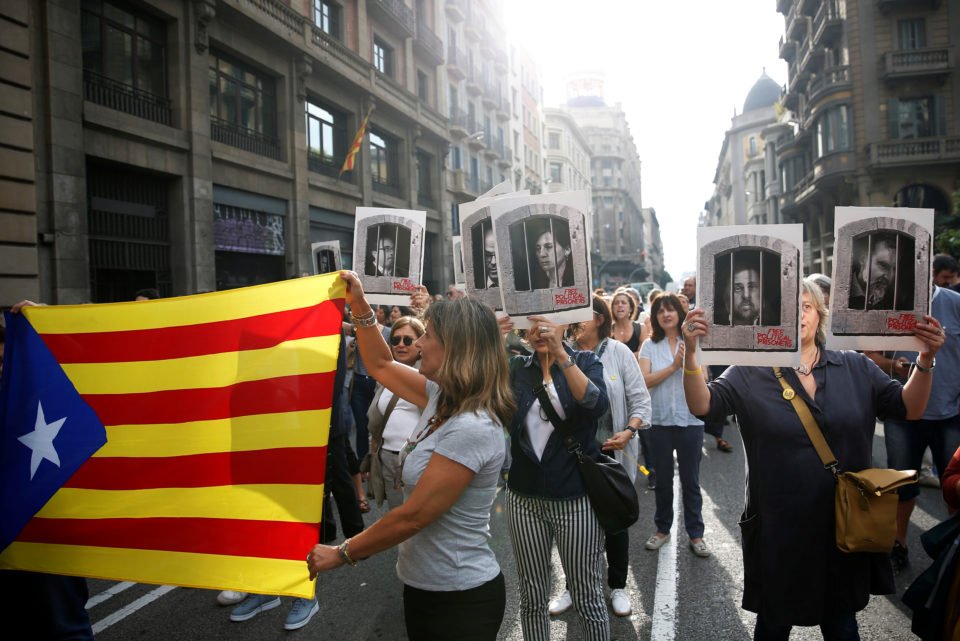 Separatist protests have been largely peaceful so far but police sources have said authorities are prepared for any violence Barcelona, Spain October 14, 2019. REUTERS/Rafael Marchante

By Isla Binnie and Emma Pinedo

MADRID, Oct 14 (Reuters) – Spain’s Supreme Court on Monday sentenced nine separatist leaders from Catalonia to between nine and 13 years in prison for sedition over their role in a failed bid for independence in October 2017.

The three other defendants in the landmark ruling, which stemmed from the holding of a referendum that had been banned and a short-lived independence declaration, were found guilty only of disobedience and not sentenced to prison.

All defendants were acquitted of the gravest charge, rebellion, but other leading separatists were quick to call the ruling an “atrocity” and an “attack on democracy”.

Much is at stake, both for Spain and for its wealthiest region, whose independence drive attracted worldwide attention, triggered Spain’s biggest political crisis in decades and unnerved financial markets.

The main questions are how separatists will react to the verdicts, whether the promise that protests will be peaceful holds, and how the standing of both Spain and the separatist movement are affected.

“What happened on October 1 was not just a demonstration or a massive act of citizen protest. If that had been the case, there would have been no criminal sentencing. It was a tumultuous uprising encouraged by the accused, among many others,” the Madrid court said in its ruling, delivered in writing rather than in an open session.

The former head of Catalonia’s regional government, Carles Puigdemont, said the prison sentences for the separatist leaders were an “atrocity”.

“Today we are all condemned, not just 12 people. This sentence is an attack on democracy and the rights of all citizens,” said the head of Catalonia’s regional parliament, Roger Torrent.

The court convicted Junqueras and eight other leaders on charges of sedition and four of them of misuse of public funds, the court ruling showed.

Separatist protests have been largely peaceful but police sources have said authorities are prepared for any violence.

After the ruling was published, the CDR grassroots movement tweeted: “It’s time to rise up against the authoritarian fascism of the Spanish state and its accomplices. It is time for the #RevoltaPopular (popular revolt).”

Outside the Lledoners prison in the Catalan town of Sant Joan de Villatorrada where the leaders were being held, men embraced after learning the Supreme Court’s verdict.

The government has said it is ready to take direct control of Catalonia as it did in 2017 if secessionist leaders break the law.

The ruling is likely to colour a national election on Nov. 10, Spain’s fourth in four years, and influence the direction taken by the separatist movement.

An opinion poll in July showed 48.3% of Catalans against secession and 44% in favour.

Kane and Southgate promise England will bounce back against Bulgaria