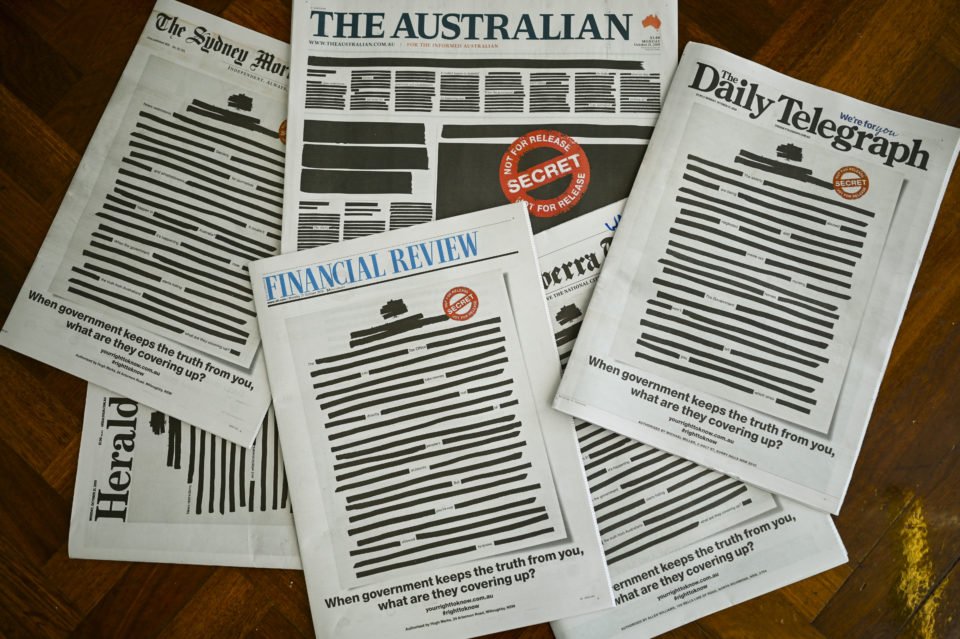 Front pages of major Australian newspapers show a 'Your right to know" campaign, in Canberra, Australia, October 21, 2019. Australia's biggest newspapers ran front pages on Monday made up to appear heavily redacted to protest against recent legislation that restricts press freedoms, a rare show of unity by the usually tribal media industry. AAP Image/Lukas Coch/via REUTERS ATTENTION EDITORS - THIS IMAGE WAS PROVIDED BY A THIRD PARTY. NO RESALES. NO ARCHIVE. AUSTRALIA OUT. NEW ZEALAND OUT.

Australia‘s biggest newspapers ran front pages on Monday made up to appear heavily redacted, in a protest against legislation that restricts press freedoms, a rare show of unity by the usually partisan media industry.

Australia has no constitutional safeguards for free speech, although the government added a provision to protect whistleblowers when it strengthened counter-espionage laws in 2018. Media groups say press freedoms remain restricted.

Mastheads from the domestic unit of Rupert Murdoch’s conservative News Corp and fierce newspaper rivals at Nine Entertainment ran front pages with most of the words blacked out, giving the impression the copy had been censored, in the manner of a classified government document.

Parliament has long been passing laws in the guise of national security that impeded the public’s right to know what the government did in its name, the Media, Entertainment and Arts Alliance (MEAA) said.

“Journalism is a fundamental pillar of our democracy,” said Paul Murphy, the chief executive of the industry union.

“It exists to scrutinise the powerful, shine a light on wrongdoing and hold governments to account, but the Australian public is being kept in the dark,” he said in a statement.

Monday’s media protest aimed to put public pressure on the government to exempt journalists from laws limiting access to sensitive information, enact a properly functioning freedom of information system, and raise the benchmark for defamation lawsuits.

Communications Minister Paul Fletcher did not immediately respond to questions on Monday. The government has previously said press freedom was a “bedrock principle”.

Opposition leader Anthony Albanese told reporters that while journalists should not be prosecuted for doing their jobs, defamation laws provided a “good constraint on ensuring that there is some level of accuracy”.

The campaign for media freedom is a rare moment of unity in Australia‘s tightly-held sector, where media houses compete vigorously for advertising spend and offer very different visions for the country.

The issue came to a boil soon after the May re-election of Australia‘s Liberal-led conservative government, when police raided the head office of the Australian Broadcasting Corporation (ABC) in Sydney and the home of a News Corp editor on suspicion of receiving national secrets.

The raids, which involved police examination of about 9,000 computer files at the ABC and sifting through the female News Corp editor’s underwear drawer, drew international condemnation.

At the time, the ABC said the raid on its office was in relation to 2017 stories about accusations of military misconduct in Afghanistan. News Corp has said the raid on its employee concerned an article about government plans to spy on Australians’ emails, text messages and bank accounts.

Global attention turned to media freedoms in Australia early this year when a court order prevented media from reporting that the former Vatican treasurer, Cardinal George Pell, had been found guilty on child sex abuse charges.

Some Australian outlets reported that an unidentified person had been convicted but some foreign media companies identified Pell because they were outside Australia‘s jurisdiction.

Prosecutors are now seeking fines and jail sentences for three dozen Australian journalists and publishers for their trial coverage. Pell is appealing against his convictions.