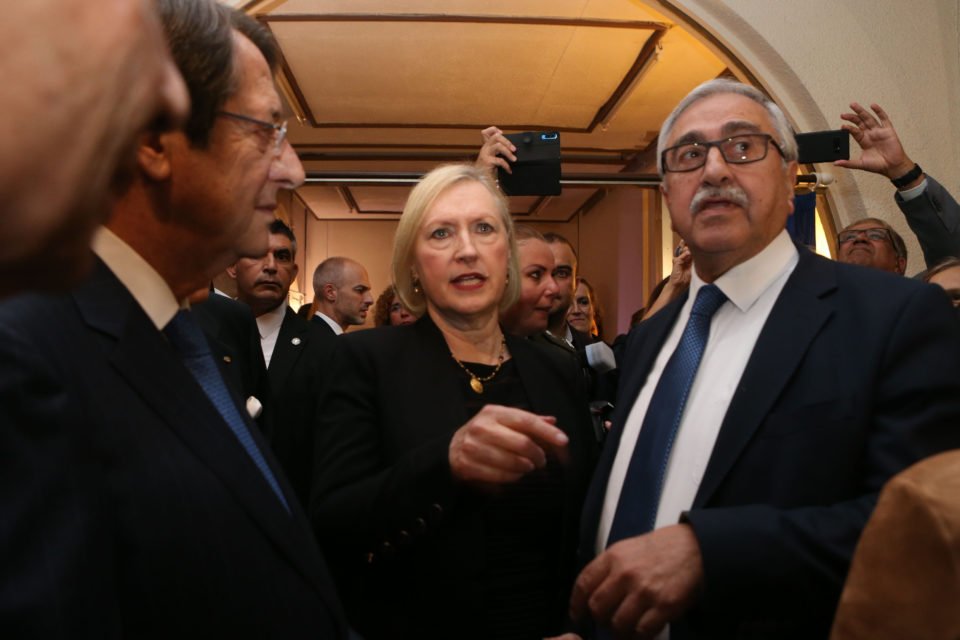 Elizabeth Spehar with the two leaders at a past reception

The UN Secretary-General’s Special Representative Elizabeth Spehar has stressed the need for the two Cypriot leaders to redouble their efforts to conclude the terms of reference and return to the negotiations.
President Nicos Anastasiades, and Turkish Cypriot leader, Mustafa Akinci, attended a reception on Thursday evening at the Ledra Palace hotel in Nicosia’s Green Line on the occasion of the UN Day where they spoke briefly.

After shaking hands, Anastasiades and Akinci had a short conversation in a cordial atmosphere. The two also had a brief discussion with Spehar. Apart from Spehar two young Cypriots, a Turkish Cypriot man and a Greek Cypriot woman, took the floor and spoke during the reception, attended by politicians, religious leaders and other personalities from both communities, about their aspirations and hopes for the future of Cyprus.

In her speech, Spehar said, that the leaders still had an opportunity to take a mutually acceptable solution to the finish line, but they will need to be ready to explain it to, and promote it with, their constituencies. The UN, including the Secretary-General himself, is ready to play its part. All parties will need to do the same, she added.

The UN diplomat said that this was the third year “that we mark the UN day following the closing of the Conference on Cyprus in Crans-Montana in the summer of 2017. In the intervening years, with a continuing hiatus in the talks, Cypriots are still facing uncertainty about their future and concern about what will come next,” she noted.

Moreover, she said that “we must acknowledge that, while the talks have stalled, the world has not stopped around us. Changes are happening, with important implications, on and around the island, in this region and on a global scale. The current environment is challenging,”.

Elaborating on the UN’s role for peace in Cyprus, she noted that the critical role played by the mission`s peacekeepers over the organisation’s many years in Cyprus– military, police and civilian – who patrol the buffer zone, keep the peace, bridge differences, build confidence and work to foster understanding between communities, persists.

She said that the Secretary-General`s Good Offices, “has steadfastly supported the peace negotiations, the United Nations High Commission for Refugees, which is playing a vital role in supporting refugees, forcibly displaced communities and stateless people; the United Nations Development Programme, which has, with dedication and professionalism, supported bi-communal projects, including important conservation works; the office of the third member of the Committee on Missing Persons, which is helping to find and identify the remains of those who continue to be missing and in this way, attempt to heal the terrible pain of the families left behind, and the International Organisation for Migration, which facilitates the return and reintegration of migrants in a humane and dignified way.”

Spehar said that there were positive moments in 2019 as the leaders reached out to each other on several occasions, under the auspices of the UN, to work on reconciling their positions and paving the way back to the negotiating table while these efforts are still very much in progress.

She further said they also agreed on and actively facilitated the implementation of various, substantive confidence building measures, including the interconnectivity of the electricity grids and the interoperability of the mobile phones, marking the full implementation of the leaders’ agreement of 2015.

“Civil society actors who support a mutually beneficial settlement of the Cyprus problem further raised their voices in 2019, calling for progress and a successful conclusion. All involved parties to the Cyprus problem have confirmed their interest in and willingness for a negotiated solution,” Spehar said.

She went on to note that the bicommunal Technical Committees “are working more consistently on initiatives to improve the daily lives of Cypriots in the many fields that they are designed to work on, from cultural heritage to environment, from health to humanitarian affairs, from crime and criminal matters to crossings, from gender equality to education” adding that the volunteer peace education initiative, ‘Imagine’, which, as she said, has shown promising results.

“In the last two academic years, 3665 students and 397 teachers from more than a hundred Turkish Cypriot and Greek Cypriot schools from all areas of Cyprus participated in this programme which promotes inter-communal contact, understanding and a culture of peace,” Spehar noted.

She then posed the question “where do we see Cyprus in 2045, when the UN turns 100 years old?” to note that “the decisions that are taken now could determine the answer to that question.”
Spehar also said that “we have also seen a slow but steady increase in interest in reaching across the divide and building cooperation between people of the communities in a variety of fields, an essential underpinning of any sustainable solution to unite the island in peace”.

She went on to say that “while the leaders bear the primary responsibility for the talks and will need to redouble their efforts to conclude the terms of reference and return to negotiations, we should recall that successful peace processes tend to include multiple levels of engagement that help build the foundation for success. All Cypriots clearly have a stake in their own future here, and perhaps young people more than any,” the UN diplomat concluded.