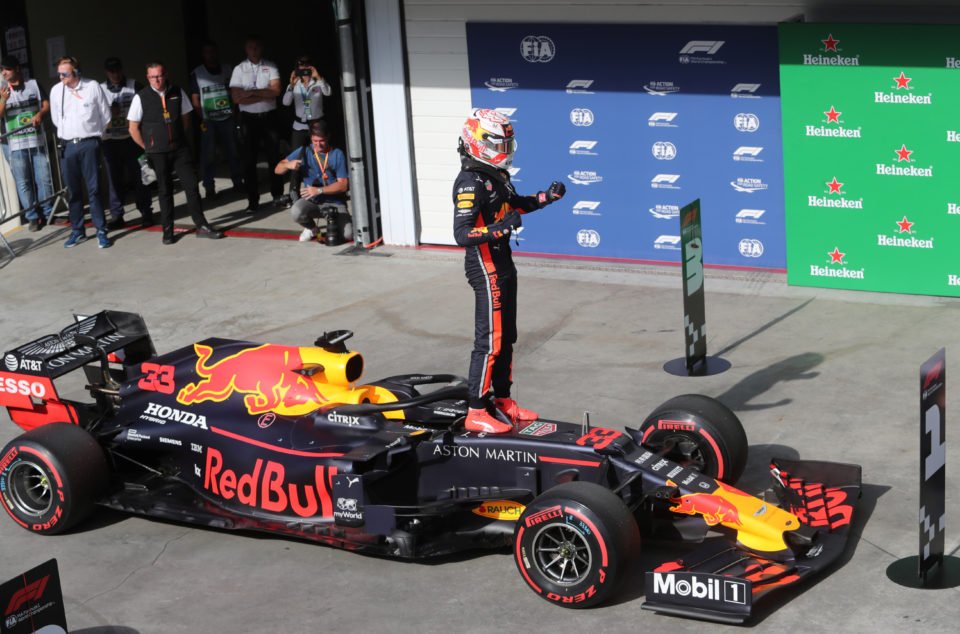 Max Verstappen sealed pole position at the Brazilian Grand Prix on Saturday and served it up to a delighted Red Bull team principal Christian Horner as a 46th birthday present.

The pole was the second of the Dutch 22-year-old’s Formula One career and the first in Brazil for engine partners Honda since the late triple champion Ayrton Senna in 1991 with McLaren.

“The car was on fire and I hope that was a nice birthday present, Christian,” Verstappen said over the team radio after clocking a best lap around Interlagos of one minute 07.508 seconds.

“That was the best birthday present you could have given me. Well done. Brilliant in all three sessions. So thank you very much for that,” replied Horner.

Ferrari’s Sebastian Vettel joined Verstappen on the front row, a tenth of a second off the pole time, for what will be his 100th start for the Italian team after winning four championships with Red Bull.

“I had a bit of a wobble at the exit of the last corner on the first run but I think Max improved his time, so fair play. I think it’s his pole position,” said Vettel.

“I think both Red Bull and Mercedes look a bit stronger managing tyres but we’ve got the speed and we’ve got the power,” added the German.

Lewis Hamilton, who clinched his sixth world championship in Texas two weeks ago and was quickest in final practice, will line up third for Mercedes with team mate Valtteri Bottas alongside.

“We’ve been down on power, I guess, compared to the others particularly, that’s where we lose most of our time,” said Hamilton. “But I gave it absolutely everything I had and I’m glad at the end.”

Ferrari’s Charles Leclerc qualified in fourth place but drops 10 places due to an engine change.

With both championships won by Mercedes for an unprecedented sixth year in a row, Sunday’s penultimate race of the season is likely to focus on the battle to be best of the rest.

Leclerc is third overall and leads Verstappen by 14 points, with Vettel a further five adrift.

For Red Bull there is also unfinished business after Verstappen missed out on victory in Brazil last year when he tangled with backmarker Esteban Ocon while leading.

“I’ll try to finish it off now,” promised Verstappen.

There is every chance of the youngster making amends on Sunday, with the winner in Brazil starting on pole position in five of the last six races there.

Verstappen, however, failed to convert his previous pole, in Hungary last August, into victory with Hamilton going on to celebrate instead.

Red Bull’s Alexander Albon will start in fifth place with Pierre Gasly, the French driver he replaced earlier in the season, alongside for Toro Rosso.

Haas enjoyed their best qualifying since the Spanish Grand Prix in May with Romain Grosjean lining up seventh and Kevin Magnussen ninth.

Kimi Raikkonen qualified eighth, after Leclerc’s demotion, for Alfa Romeo at the circuit where he won the 2007 world championship while McLaren’s British rookie Lando Norris rounded out the top 10.

Norris’s Spanish team mate Carlos Sainz failed to set a time after an engine problem in the first phase of qualifying.

“Something went, something on the engine,” he reported.