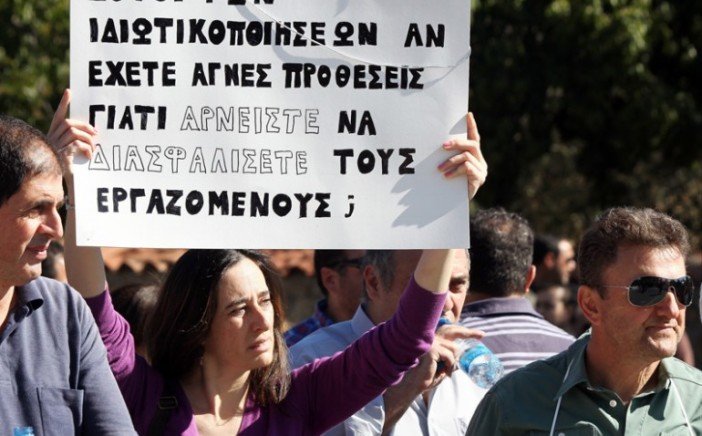 A 2017 demonstration against CyTA privatisation

Three opposition parties on Monday said they would not approve a budget earmarked for studies on whether CyTA should sell shares and forge partnerships arguing this would be just an indirect way of privatisation.

The budget for the study is half a million euros

CyTA’s board chairperson, Rena Rouvitha Panou, who presented the organisation’s budget for 2020 to the House finance committee told MPs that the post-tax surplus for 2018 amounted to €60.6m, which is the highest level of profit for the last seven years.

As regards 2019, she said that based on indications to date, the post-tax surplus is estimated to be significantly higher than budgeted while an increase in the total revenue of the utility is expected, reversing the trend of decreasing revenue in recent years.

Stabilising trends are also recorded in CyTA’s market share as regards services where it holds more than a 50 per cent share both on fixed and mobile telephony but also internet. As regards television, CyTA saw its market share rise from 44.7 per cent to 45.6 per cent during the first six months of the year.

She added that the board’s goal is to increase the profitability of the organisation, regardless of any talk of shareholding.

Panou also said that CyTA is working with ministries to provide them with digital transformation expertise.

Some MPs said after the meeting, that given that CyTA is doing so well, their parties would not approve a €500,000 budget slated for studies into the utility of issuing shares.

This, he said, was proof that the company is right to remain as is and continue to offer quality services.

Diko, he said, would not approve the budget for studies on whether the utility should issue shares or not or make partnerships.

“This is an indirect way to discuss privatisation again,” he said.

Akel’s Stefanos Stefanou and the Greens’ Giorgos Perdikis agreed that their parties would also not approve the budget.

The privatisation of public organisations including CyTA’s was one of Cyprus’ commitments to its Troika of international lenders – the International Monetary Fund (IMF), the European Commission (EC), and the European Central Bank (ECB) – which was met with string resistance by opposition and the utility.

A draft bill on the corporatisation of the CyTA has stalled at the House of Representatives since 2017 while it does not seem there’s any intention of adopting it.