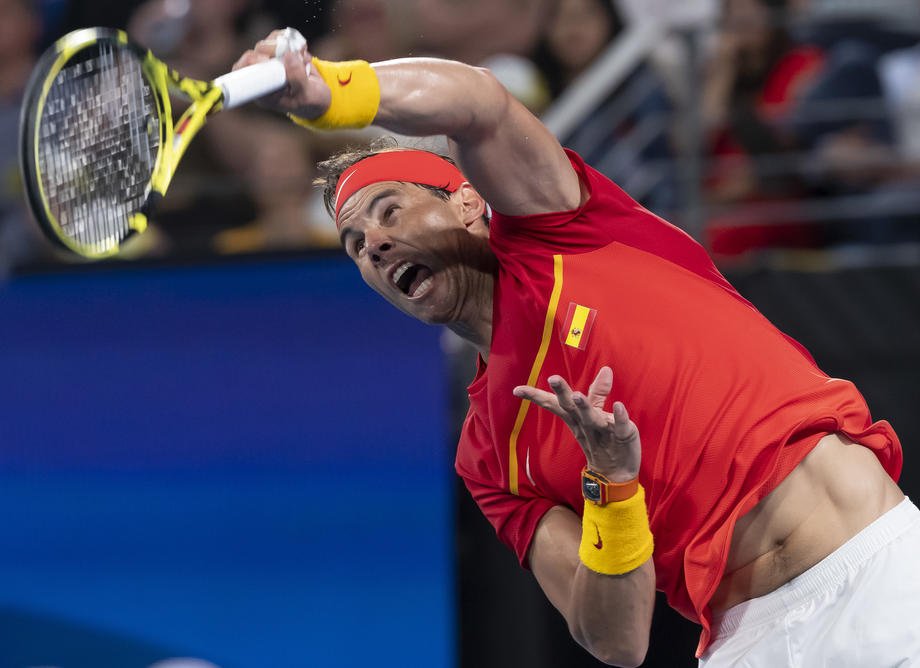 Rafael Nadal of Spain in action against Alex De Minaur of Australia.

Rafael Nadal secured a come-back victory against Australia’s Alex De Minaur at the ATP Cup in Sydney on Saturday, propelling Spain into the final of the inaugural event to play the Novak Djokovic-led Serbian team.

The world’s top ranked player was ambushed early by the young Australian, who threatened to run away with the match, before the Spaniard recovered to win 4-6 7-5 6-1.

Earlier in the evening, Roberto Bautista Agut played a near flawless match to defeat a misfiring Nick Kyrgios 6-1 6-4, giving Spain an unassailable lead going into the doubles match.

The top 20-ranked De Minaur, who had previously not won a set against the Spaniard, threw his wiry frame at every shot, breaking Nadal’s serve in the first game of the match before going on to take the set.

The 20-year-old hopped into his backhands, such was his determination to throw himself forward, and launched into the air to hit his punishing forehands.

Nadal, one of the most dangerous players to serve against, remarkably did not earn a break point on the Australian’s serve until late in the second set, which he converted despite enjoying little momentum up until that point.

“He had a lot of energy, he plays with a lot of passion, sometimes a little too much,” Nadal said.

Spain has had a punishing schedule leading into the match, which included finishing the previous tie against Belgium in the early hours of Saturday morning.

Nadal reeled off four straight games at the start of the third to set up the victory as De Minaur’s error count rose, and the Spaniard found his range.

In the other semi-final, Djokovic played strong tactical tennis to overcome the enigmatic Russian Daniil Medvedev, to secure Serbia’s spot in the final.

The Serbian won the contest 6-1 5-7 6-4 after he found success pushing the 198cm (6.5 ft) tall Russian around the court, forcing Medvedev to constantly scrape shots off his shoe laces.

Less than two weeks out from the Australian Open, Djokovic gave the world’s top players a possible blueprint on how to beat the 23-year-old Russian who has been regularly toppling the game’s elite.

Spain will have an opportunity in Sunday’s final against Serbia to confirm it has the world’s best men’s tennis team, having recently won the revamped Davis Cup and boasting two top 10 players in its ATP Cup side.

But Nadal will likely first need to reverse the momentum in his long rivalry with Djokovic, who has not lost to the Spaniard on hardcourts, like the court surface in Sydney, since 2013.

Nadal said late on Saturday he had not yet formed a game plan.

“No idea yet, I’m just happy for now, tonight, to be where we are,” Nadal said.