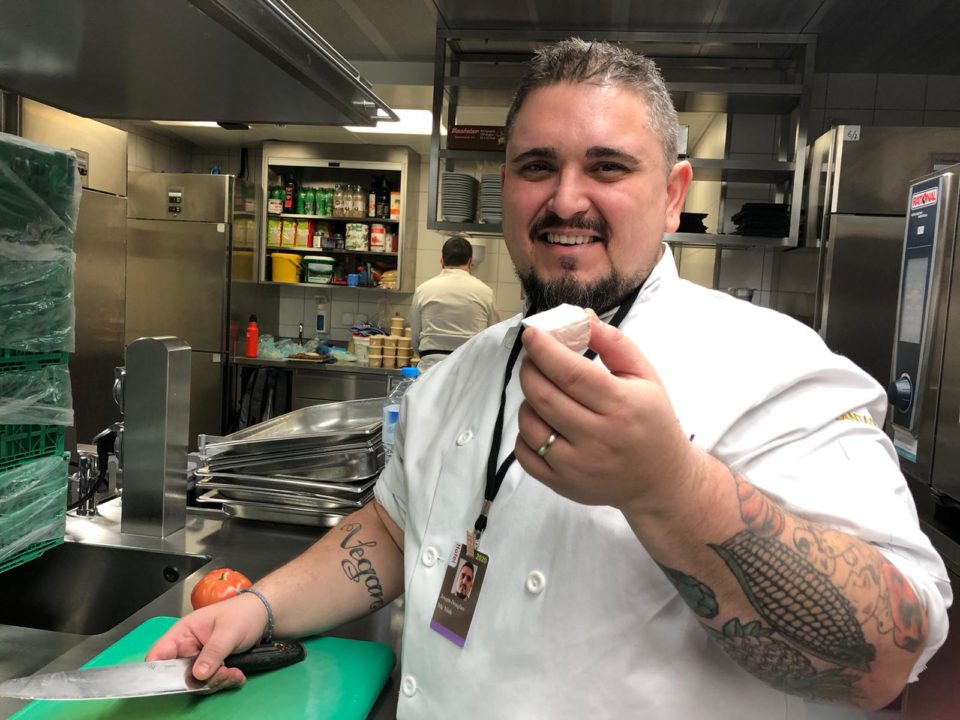 Canadian vegan chef Doug McNish poses in a hotel kitchen in Davos, Switzerland, where he is preparing a meal for the global elite’s annual meeting

When Canadian vegan chef Doug McNish was invited to cook for the annual gathering of the world’s elite in the Swiss Alps, he was taken by surprise – then quickly signed up.

McNish, 37, is one of several chefs preparing vegan or vegetarian meals for some of about 3,000 world leaders, policymakers, CEOs, influential thinkers and celebrities at the 50th annual meeting of the World Economic Forum (WEF) in Davos.

Chopping vegetables in a kitchen at the Seehof Hotel, McNish said he was always on board to encourage more people to stop eating meat, with agriculture and livestock accounting for 11% of planet-heating global emissions, according to U.N. data.

With climate change a major theme at Davos, organisers have taken meat and fish off the menu in the main Congress Centre for the first time for “Future Food Wednesday” and banned bananas in an ongoing drive to focus on local produce.

“Cooking here gives me the chance to show on a global scale how amazing vegan food can be,” McNish told the Thomson Reuters Foundation on Tuesday while starting to prepare tempeh soy croquettes and vegan-fried Camembert for a dinner on Thursday.

With the word “vegan” tattooed on his right forearm and a colourful mix of fruit and vegetables on the left, there is no doubting where McNish stands when it comes to food. The classically trained chef became vegan 15 years ago and has since won international awards for two of his three vegan cookbooks. He has run various restaurants in Toronto while advising others on how to introduce vegan food to menus.

He was accepting of the four-wheel drives waiting outside the hotel to ferry speakers around and the number of wealthy arriving by private jet, saying change took time.

“For me, success this week would be people tasting the food and saying ‘holy crap, that was good, I can’t believe it was vegan’,” said McNish, who ditched animal products after watching a documentary about factory farming titled “Meet Your Meat”.

“You can live a luxury life – not be a hippy wearing Birkenstocks – and not eat animals.”

The WEF has been on a drive for several years to make the annual meeting more environmentally friendly and chose sustainability as the theme for the 2020 summit.

For the fourth year, WEF officials said the four-day meeting would be climate-neutral through various initiatives such as offsetting 100% of emissions, including air travel.

That has been done by funding sustainable projects in the Amazon, efficient cookstoves in China, Mali, India and South Africa, and biogas production on local farms, among others.

WEF spokesman Oliver Cann said 90% of the official car fleet was now hybrid or electric, AI was being tested this year to measure food waste, and most food was locally sourced.

While private jets continued to arrive, this year a lower-carbon fuel blending synthetic and conventional jet fuel was on sale at Zurich airport.

“It is all about showing leadership,” Cann said.

But the issue has become more pressing for political and corporate leaders as a climate emergency is declared by more countries and cities, and activists take to the streets.

A global survey of public opinion released on Tuesday by the WEF found more than two-thirds of about 10,500 people in 30 countries blamed global warming on human activity.

“Our house is still on fire,” Swedish climate activist Greta Thunberg, 17, told a packed session on Tuesday, repeating her remarks from a year ago. “Your inaction is fuelling the flames.”

On the main street of Davos, small groups of protesters slammed a lack of action on climate change, having trekked to the ski resort over two days.

“This is the most important topic that we are facing today,” Marila, 19, a student from Olten, Switzerland, who did not want to give both names, told the Thomson Reuters Foundation.

“If we don’t do anything, mankind will be extinct.”

Cockfight photos from north cause stir on social media