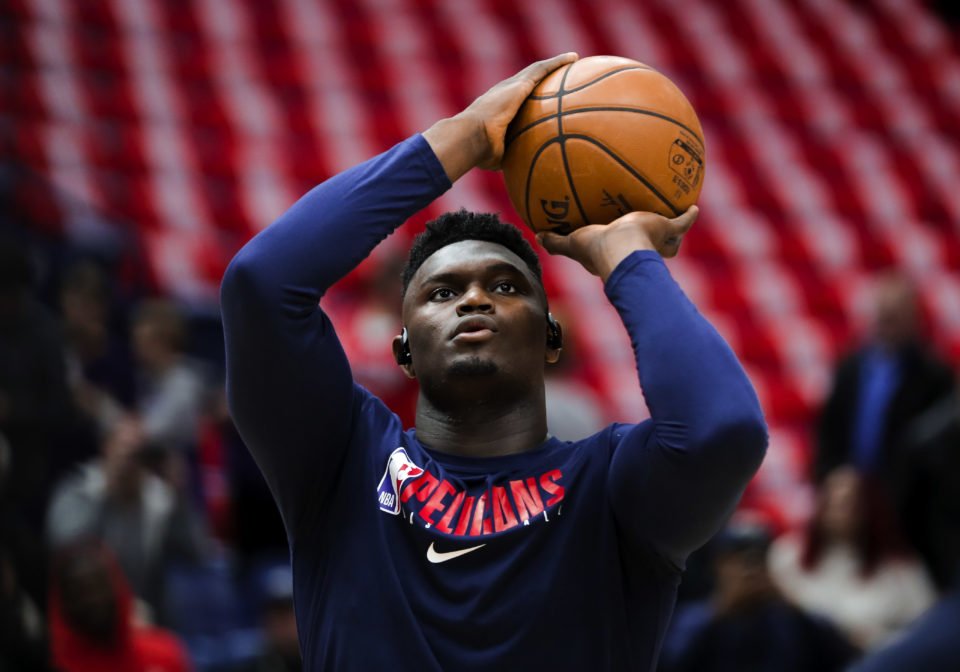 Hype: Zion Williamson made his eagerly-anticipated NBA debut for the New Orleans Pelicans

Zion Williamson scored 22 points in his NBA debut, but LaMarcus Aldridge topped him with 32 points and 14 rebounds as the visiting San Antonio Spurs defeated the New Orleans Pelicans 121-117 on Wednesday night.

Williamson, the first overall draft choice, missed the first 44 games of the season while rehabbing from arthroscopic knee surgery.

He struggled for three quarters before scoring 17 consecutive Pelicans points to briefly give them the lead in the fourth quarter before sitting out the final 5 1/2 minutes as Spurs regained control.

Williamson scored all four of his three-point shots in the game and became the first player in NBA history to achieve this feat on debut.

Williamson scored three points but turned the ball over twice as the Spurs extended a nine-point halftime lead to 14 points early in the third quarter.

With Williamson on the bench, Holiday and Ingram scored four points each as New Orleans got within 79-71.

San Antonio rebuilt the lead to 14 before Jaxson Hayes’ dunk with 1.4 seconds left cut the gap to 94-82 at the end of the third quarter.

Ball’s 3-pointer started the fourth-quarter scoring. Minutes later, Williamson grabbed a defensive rebound, dribbled into the frontcourt and passed to E’Twaun Moore for a layup that pulled New Orleans within 97-91.

That started the flurry by Williamson, who made a 3-pointer, a layup, another 3-pointer, a short jumper, two more 3-pointers and a free throw.

New Orleans briefly took the lead at 107-106 before Marco Bellinelli made a 3-pointer and Murray hit a short jumper to give the Spurs a 111-108 lead.

Williamson went to the bench, and DeRozan made consecutive baskets to give San Antonio a 115-108 lead with 4:33 left.

New Orleans scored just three points in nearly four minutes before Ball and Josh Hart made 3-pointers to cut the Spurs’ lead to 119-117 with a minute left.

Aldridge made two free throws with 45.6 seconds to go, and the Pelicans didn’t score again.