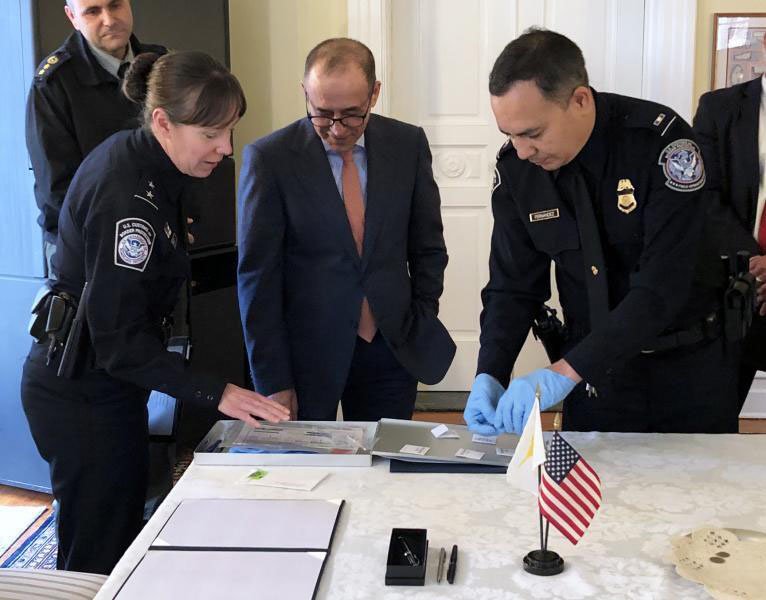 US authorities recently returned a priceless collection of ancient Cypriot coins dating back to 81 BC that was discovered in 2009 by officers in an air shipment from London destined for a collector.

The US Customs and Border Protection (CBP) department announced it had returned to the embassy of Cyprus seven ancient coins dating back to 81 BC, discovered in April 2009 by Baltimore CBP officers in an air cargo shipment.

According to CBP, officers from the Area Port of Baltimore found the ancient coins in April 2009 during an inspection of air cargo that had arrived from London. The parcel with the coins in question was destined to a coin collector in Missouri.

CBP had issued a letter to the consignee requesting any documentation they received from the government of Cyprus authorising the lawful importation of the cultural artifacts. “In May 2009, the consignee admitted to not possessing authority from the government of Cyprus to import the artifacts, and CBP officers seized the coins,” the US authority said.

The parcel also included Chinese coins determined to be from the Zhou, Han and Western Han dynasties, dating from 400 BC through 220 AD.

The coin collector lost a protracted legal challenge to regain possession of the coins and CBP’s Office of International Affairs coordinated with the government of Cyprus to repatriate the coins which were delivered last week to Cyprus’ ambassador to the US, Marios Lyssiotis,  during a ceremony at the embassy in Washington DC.

Casey Durst, CBP’s Director of Field Operations in Baltimore told US media she was “honoured to return these priceless national treasures to the government and citizens of Cyprus,” on behalf of US Customs and Border Protection.

She also said that the CBP would continue to use their border authority “to identify and rescue precious antiquities being smuggled by those who profit on the theft of another country’s historical and cultural property and return them to their rightful owners.”