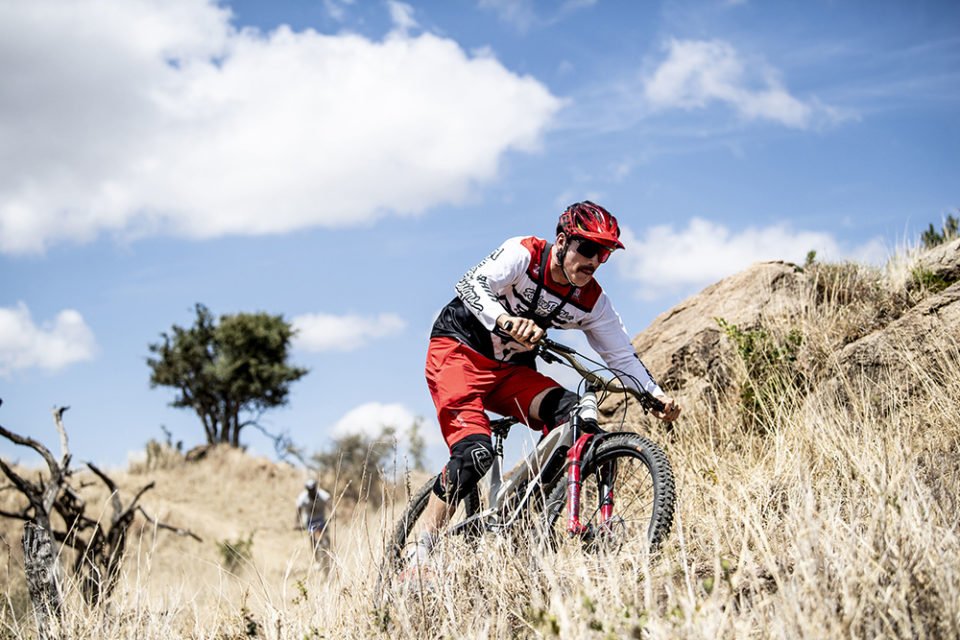 Claire Spreadbury catches up with a retired pro, to discover the world’s wildest rides

ROB Warner fell in love with mountain biking from a young age. “I loved being able to hop on a bike and see the world around me, exploring places that may not have been touched or seen for years. It was – and still is – about independence. I can ride wherever I want and for as long as I want.”

Warner became a mountain bike pro in 1993, making history in 1996 as the first-ever British rider to win a Downhill round of the UCI World Cup in Kaprun. He also chalked up three UK National Championship titles before retiring in 2007.

“After a long racing career, I fell out of love with the sport and my bike,” he says. “I honestly didn’t go near it for years. However, after riding my bike in places like Africa, New Zealand and Nepal for a Red Bull TV series, I’ve found a whole new appreciation and thirst for getting on my bike.”

Want to know the best places in the world to ride on two wheels? Here are Warner’s top spots…

“Everyone knows how awesome Japan’s ski scene is, but when the snow melts, it reveals what I heard once as ‘The Hidden Alps’. Nozawa Onsen is this picturesque mountain village that’s at the base of some of the most famous ski resorts in the country.

“I first heard about this place when the UCI introduced Mount Arai onto their World Cup calendar and it didn’t disappoint. Most of the trails have been painstakingly built by enthusiastic locals, who take great care in their upkeep and expect you to do the same.

“Your surroundings are stunning as you chop and change from panoramic mountain views to moody forests and historic shrines. The Japanese love crazy sports, and mountain biking is certainly one of those, so you’ll be surrounded by passionate people, looking to ensure you have a great time.”

“In all my travels, I’ve never come across anything quite like Cotopaxi. The scale of it just blew my mind! At 5,897 metres tall, it’s one of the highest volcanoes in the world and certainly brings a whole lot of fun with it.

“Cotopaxi brings more to the table than just flying down the side of a volcano at 50mph. The different ecosystems you pass as you’re coming down is incredible, and there’s some diverse terrain which will suit all abilities. One of the most memorable parts for me is the aptly named Heavenly Ridge. Now, being a commentator, I’m guilty of the occasional hyperbole, but this was one of the most jaw-dropping things I’ve seen in my life.

“South America’s mountain bike scene is booming at the moment, so you won’t be short on guides happy to recommend some amazing routes on, or nearby, Cotopaxi. If you’re only looking to fly downhill, there’s also plenty of companies that will take you and your bike up the volcano and let you ride down.”

“I know it’s a little middle of the road, but to be honest, you won’t beat the riding in New Zealand. It’s got the best trails on earth, the country is made for adventure sports and mountain bikers are spoilt for choice anywhere they look.

“The Old Ghost Road Trail is New Zealand’s longest single-track and a must-do for any cyclist looking for a bucket-list experience. The 85km trail winds its way through remote valleys, across mountain tops and down river gorges. You’ll need to be an advanced rider for this one, and certainly have a reasonable level of fitness about you.

“One of my favourite things about the Old Ghost Road Trail is the simplicity of it. If you want to do a multi-day ride, you can stay in remote huts, where you’ll meet laid-back locals or other like-minded tourists. Plus, if you’re thirsty at any point, just pull over to the nearest stream, river or waterfall and guzzle down the refreshing water.”

“Whistler Bike Park in Canada ticks all the boxes for riders of all abilities, and it really is one of the greatest places you’ll ever ride. With over 5,000 vertical feet of descending and stunning scenery surrounding you at every turn, Whistler Park is the grandaddy of mountain bike parks. Yes, it can be popular and expensive, but you can ditch the crowds on much of the upper mountain and also go beyond the bike park for more free-riding choices.

“If you’re looking for something a little more chilled, Whistler is one of the best places in the world for cross-country loops, where you can cruise on relative flat to lakes and soak everything in at a leisurely pace. For those who want to incorporate some mountain biking into a bigger holiday, this would be the best spot, as it’s just a short and beautiful drive from Vancouver.”

“For me, the French Alps are one of the greatest areas on the planet to ride a bike. Vast and on a huge scale, the scenery is some of the best in the world.

“Most will flock to the Morzine, which does offer some amazing riding, but for me, I’d rather be out in the middle of nowhere away from the crowds. About an hour’s drive out of Morzine is Bourg St Maurice, a town surrounded by some incredible peaks. One of them is called the Grande Sassiere and if you’re in the region, I highly recommend it. It will take a bit of a hike in parts on the way up, but when you’ve made it to the top, at 3,747m, it’s one of the highest peaks that is fully rideable down from the top. What a ride down it is!”

“A classic that’s not to be sniffed at – the Gwydir Mawr trail has a special place in my heart, mainly for its big climbs, bigger descents and brilliant single track, that’s accompanied by scenery that always makes me feel like North Wales is one of the last untouched spots in the United Kingdom.

“Most of the climbs – and they can be tough – are on forest roads and tracks, which give you plenty of time to gaze at the mountains of Snowdownia, rather than keeping your eyes out for potential hazards in front of you.

“If you’re after a getaway from your city life, to enjoy some wilderness on your mountain bike, then there are few better options than Gwydir Mawr. One small caveat – no matter how amazing this trail is, it will most likely be raining whilst you’re riding – but that’s all part of the fun.”

“Riding in Iceland is so unique, I find it hard to do it justice with words. The variety of colours and landscapes you see throughout the Laugavegur Route is jaw-dropping, and left me close to some hairy tumbles, because I couldn’t keep my eyes straight ahead.

“It’s a multi-day effort that will take you past geysers, bubbling mud, endless lava fields and glaciated mountains. I did it in three days and was absolutely broken at the end of it, so would recommend lengthening it by a few days to absorb the sights. Added bonus is actually something off the bike – Iceland’s natural hot springs. They are everywhere, and truly the perfect antidote to a long day in the saddle.”