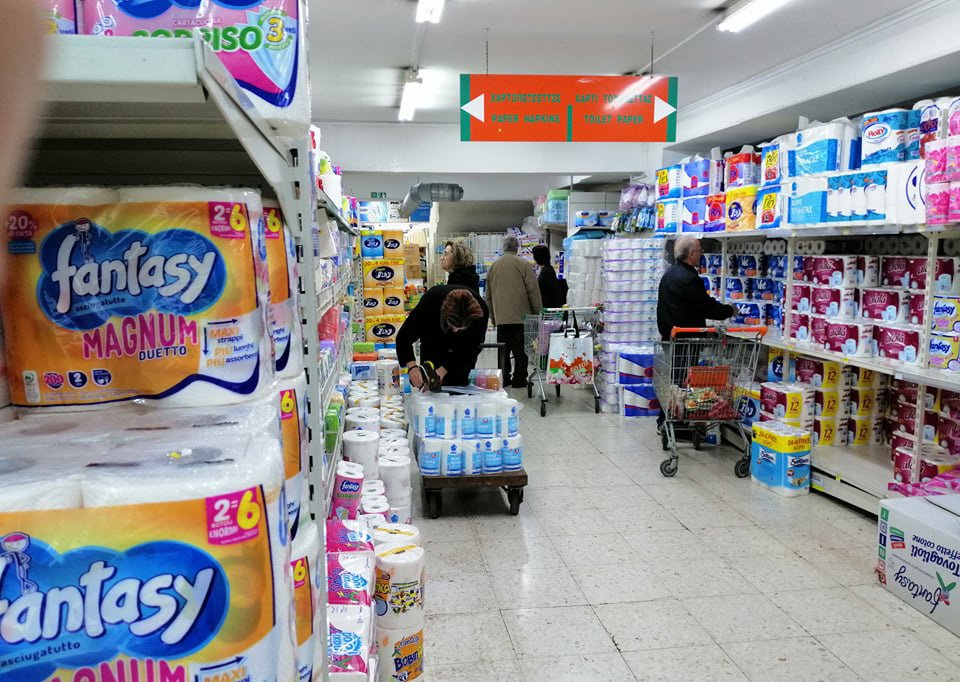 There is no risk of shortage in supermarkets following the confirmation of two coronavirus cases in Cyprus, according to the General Director of the Cyprus Supermarket Association Andreas Hadjiadamou.

But despite the reassurance, many shoppers seemed to be preparing for a worst-case scenario on Tuesday.

Hadjiadamou told Cyprus Mail that shops were already prepared way before the news regarding the outbreak came out on Monday.

“We have informed staff in supermarkets about the necessary precautions to take long before the announcement regarding the two cases of coronavirus in Cyprus. We were fully prepared for it,” he said.

Despite people already stocking up on certain products, Hadjiadamou claims the situation was completely manageable at the moment.

“We noticed that people already started stocking up on specific products such as toilet paper and bottles of water since the announcement on Monday night.

“However, there is no panic yet and I don’t think there will be in the next days.”

He admitted, nevertheless, that the situation is still in its initial phase and there is no way to predict how people will react should the outbreak turn out to be more serious.

“We have to wait and see how the situation will unfold. Every day will be different from the other from now on and we will have to adapt to the situation, like everyone else.

“I want to reassure shoppers that we will not have any shortages, we are fully stocked and prepared to face the predictable higher demand for products,” Hadjiadamou said.

But some shoppers were not taking any chances.

“I just don’t want to risk it,” said Maria, a customer at a popular supermarket in Nicosia told the Cyprus Mail on Tuesday morning.

“I know we’ve been told that supermarkets will remain fully stocked and there is no reason to be worried. However, I need to be prepared.”

She, like many other shoppers, decided to stock up on non-perishable products such as flour, pasta, rice, water, long-life milk and, of course toilet paper and body care products like shampoo, soap and shower gels.

“I have kids at home and I cannot afford to be caught off-guard should the situation take a turn for the worse,” she said.

“I don’t think the virus will spread in Cyprus like it did in Italy, at least I hope so. But I can’t say I trust the authorities when they say there is nothing to worry about.”

A cashier at the same supermarket confirmed that the number of people shopping, especially during the morning, was much higher than normal.

“Normally we don’t get many people like we did on Monday afternoon and on Tuesday morning, except before Christmas or Easter.”

The cashier said hand sanitizers were the first product to go.

“We never manage to sell many of those, but since the announcement of the two cases in Cyprus, we had to restock our shelves. It’s a sign that people are worried.”

Our View: Cabinet decisions over Covid-19 only spreading alarm