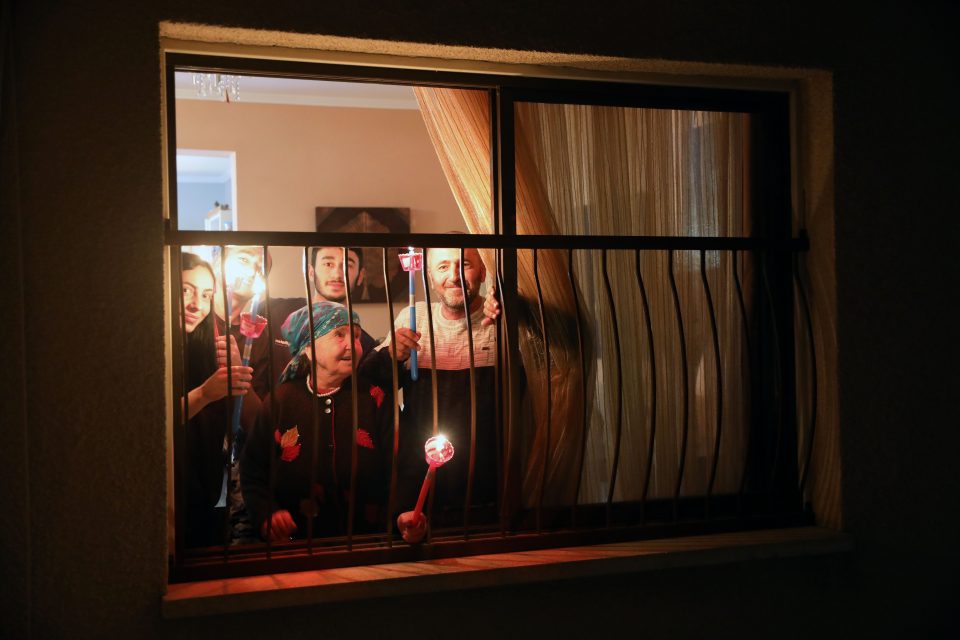 Easter in Cyprus last year was spent under lockdown. Pictured: people following the Easter mass from their homes

FROM Naples to New York, and from Greece to Iceland, there’s mounting evidence that sheltering in place may not have done much to slow the spread of Covid-19 after all.

Now, a Cypriot epidemiologist tracking the data has thrown his hat into the ring – he says around half of people infected in Cyprus may have contracted the virus while indoors.

Dr Elpidoforos Soteriades, who got his degree in epidemiology at Harvard, told the Sunday Mail: “In the case of population lockdown, people were forced to stay at home. However, once the virus was already spreading within the community, lockdown was literally forcing healthy individuals to stay in close contact with relatives that might have been exposed to the virus and were potentially spreading the virus at home.”

“In fact,” he went on, “I’m afraid it’s what eventually happened. Evidence from several country reports shows that about half of new infections were directly related to the lockdown.”

If true, it raises major questions, for the restrictions are not without cost – civil liberties curtailed, livelihoods and businesses ruined, and lives endangered as serious ailments in need of urgent treatment take a backseat amid what seems to be in many instances a tunnel-vision approach to Covid.

Soteriades kept a close eye on the daily reports coming out of Cyprus and Greece. On Cyprus, he’s drawn up a conservative estimate over 35 daily reports from the health ministry to identify the percentage of new infections originating from close contacts.

“The assessment showed that an average of 52 per cent of new infections, during the above timeframe, was related to close contacts.”

Petros Karayiannis, Professor of Microbiology and Molecular Virology, said he didn’t have exact figures on hand but that Soteriades’ assessment sounded broadly correct.

Karayiannis, one of the government’s scientific advisors on Covid, acknowledged that in-family spread must have occurred, but this was eclipsed by the fact the stay-at-home orders broke transmission chain among the population at large.

“We managed to prevent secondary and tertiary rounds of transmission. Imagine what might have happened were people milling around freely,” he remarked.

“Again, we acted on the precautionary principle, to prevent our healthcare system being overrun.”

Meantime a similar pattern of spread is emerging from a number of other countries.

On May 6, speaking at his daily briefing New York State Governor Andrew Cuomo referred to the latest data from 100 New York hospitals involving about 1,000 patients.

Staying with the United States, on May 12 Dr Jay Bhattacharya of Stanford University was being interviewed on the ‘Hoover Institution’ YouTube channel.

Bhattacharya is known for his association with epidemiologist John Ioannidis on a now-famous study on Covid-19 antibody prevalence in Santa Clara County, California.

Commenting about indoors versus outdoors transmission in the United States, he noted: “Seems like indoors is where it’s happening, where most of the transmission happens. So for instance in New York, a lot of the spread was in nursing homes. In Wuhan and in Italy, in hospitals. Actually, in Italy also in nursing homes.

“Seems like you need to have some extended contact with people who are positive in a setting indoors for it to spread. Now that’s not to say that it can’t spread outdoors, but it looks like from the evidence I’ve seen that mostly it’s indoors spread.”

And when asked a devil’s advocate-style question about the effectiveness of lockdown, the doctor commented:

“The lockdowns are not a mechanism for disease eradication. They will never, ever eradicate a disease. It will only delay when the disease happens – now or later. You pay the cost now, or you pay it later.”

Soteriades cites reports from across the world showing a high proportion of new infections originated from home environments.

“The above observations are scientifically supported by a unique study from Iceland published by senior author Stefansson et al. in the New England Journal of Medicine.”

“Interestingly, within a one-month period, they documented that the type of exposure shifted from travel abroad to family contact for about 50 per cent of the new infections,” says Soteriades.

The expert thinks governments and public health organisations including the World Health Organisation need to conduct a careful scientific assessment of the impact of the lockdown on the spread of the virus in the community and its associated side effects.

“It’s of paramount importance to evaluate the impact of the lockdown in a comprehensive manner in order to avoid using this measure in the future if it has no significant impact on controlling the spread of the disease and at the same time it is accompanied by so many serious adverse outcomes.”

He added: “Dogmatic positions have no place in the field of science. Therefore, we should examine all control measures in a scientific manner in order to prepare for the future. Government claims that we’ll return to population lockdown if infections increase again, are unproductive and unjustified. Scientific evidence is not available to support that population lockdown is effective, as it differs from quarantine and medical isolation.”

It wasn’t until March 23 that the German government decreed a lockdown. As the RKI chart shows, after the lockdown was enacted, the reproduction number did not change at all – suggesting it had little to no effect.

The chart is on page 14 of the RKI report here: https://www.rki.de/DE/Content/Infekt/EpidBull/Archiv/2020/Ausgaben/17_20.pdf?__blob=publicationFile

It was the same institute that had fanned the panic over Covid-19, when on March 20 it forecast a best-case scenario of 300,000 dead for Germany. The actual death toll stands at approximately 8,500.

Norway’s health chief recently conceded that shutdowns may not have been needed to tame Covid.

Initially Norwegian authorities – going on models developed by Imperial College London for Britain – feared the virus was rampant and only lockdown could get the assumed exponential growth rate down to a safe level of 1.

But a May 5 report published by the Norwegian public health authority has come to a striking conclusion: the virus was never spreading as fast as had been assumed and was already on the way out when lockdown was ordered.

Camilla Stoltenberg, director of Norway’s public health agency, told media: “Our assessment now, and I find that there is a broad consensus in relation to the reopening, was that one could probably achieve the same effect – and avoid part of the unfortunate repercussions – by not closing. But, instead, staying open with precautions to stop the spread.”

This was significant to admit, she said, because should the infection levels rise again – or a second wave hits in the winter – one needed to be honest about whether lockdown proved effective.

The Norwegian report can be found here: