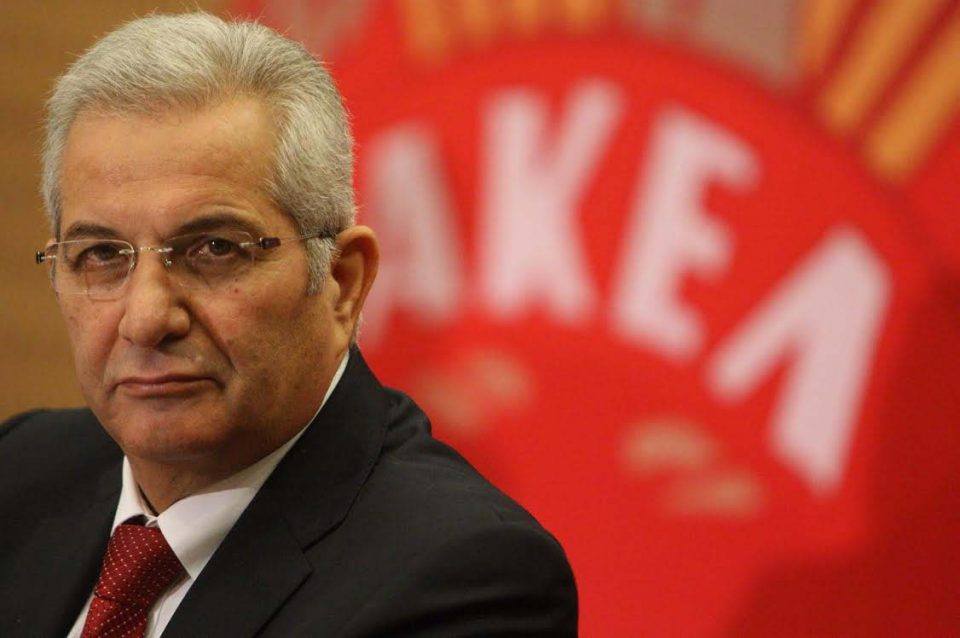 A CHAIN of events has sparked rumours that Diko and Akel have agreed to cooperate in both the parliamentary and presidential elections. These rumours were sparked last year when Diko leader Nicolas Papadopoulos and Akel chief Andros Kyprianou met secretly to discuss the House elections next year.

The meeting was eventually confirmed by a Diko official and appear to have exceeded initial expectations as relations between the two parties are now seemingly all sweetness and light. The barrage of accusations exchanged by the two parties has completely stopped, while the criticism each one throws at the government is exactly the same.

What more than anything has betrayed the two parties’ cooperation is their recent alignment on the issues of the economy. During the Anastasiades presidency, Diko invariably agreed with pro-government Disy especially on matters relating to the banks, while Akel would launch scathing attacks on Diko, accusing it of being a pawn of the banks. Suddenly, everything has changed. A few weeks ago, Diko had strongly opposed the government’s bill for state guaranteed bank loans (on the pretext that the auditor-general should supervise the lending process), indicating that it endorsed Akel’s position which claimed this would have benefited the banks.

In the past, the Akel-Diko alliance proved catastrophic for Akel’s image, for Cyprus and for democracy. What did Akel have in common with Tassos Papadopoulos to back him in the 2003 presidential elections? Out of basic dignity and respect for the Akel members murdered by Eoka in 1958, Papadopoulos should have been the last person on earth for Akel to have entered an election alliance with. Papadopoulos, using the pseudonym Diefkalion, was the theorist behind the idea of the death penalty for members of Akel and Peo union who disagreed with Eoka. Reading carefully through his articles in the magazine ‘Egertirion Salpisma’ of the Eoka youth wing, which Papadopoulos published between 1957 and 1958, one realises that Akel was right in claiming its members were murdered for their ideas and not because they were paid traitors.

Akel’s bitterness must be even greater, considering it was the only political force that supported a political rather than an armed struggle. Despite being historically vindicated, this position was considered treason of the worst type, as, according to Papadopoulos, Akel was being funded by the British Intelligence Service. Lambasting the communist party in the above-mentioned magazine, for its position against the armed struggle, he wrote: “But how do you mean, you the ‘proletariat of the struggle’, patriotism? Is it through lukewarm, risk-free telegrams of protest, and servile bowing? SHAME ON YOU.” The executions and unsubstantiated claims about cooperation with the Intelligence Service should have been an insurmountable obstacle for an alliance with Papadopoulos.

Even if we forget Papadopoulos’ past and the pain he had caused to many Akel members, was it ever possible for the leader of Diko to consent to a federal settlement with political equality? The view of the then Akel chief, Demetris Christofias, that “the man has changed” was nothing more than wishful thinking. So what was the purpose of the grotesque alliance between Akel and Diko? It was neither in the party’s nor the national interest. In the 2004 referendum Diko imposed its terms on Akel, and in the end the incredible thing happened – the party of the Right, Disy, which sheltered ultra-nationalists, backed the Annan Plan, while the party of Left, whose dream was supposedly the brotherly co-existence with Turkish Cypriots voted against it, “in order to cement the yes”.

In 2004 Akel seemed untrustworthy and lightweight on the outside and was erratic and shaken on the inside. And the reason for this fragmented picture was Diko. The view of the average Cypriot was that the reason Akel rejected the Annan Plan was then president Papadopoulos’ threat that if the party did not back the ‘no’ vote all its ministers would have to step down. Therefore, at the specific time, the party interest prevailed over the national interest and this is one of the main reasons that Akel’s electoral strength has been contracting. In the parliamentary elections before the referendum it took the biggest share of the vote, 34.7 per cent, whereas by 2016 its share had fallen to 25.7 per cent. In the same period the number of citizens that voted for it fell drastically, from 142,647 to 90,204.

Returning to the present, what could be the basis of an Akel-Diko alliance when the two parties have diametrically opposed views on the Cyprus problem? From what the top officials of Diko have been saying it is obvious they reject the idea of political equality and support the principle of ‘one man, one vote’ that cannot be fully implemented in federal states.

So, what is the purpose of the cooperation? Is it perhaps to confirm the prevailing view that these two disparate parties are motivated by their hunger for power? Akel should not betray its principles and ignore the national interest. First and foremost, it must realise that the long-term interest of the party coincides with the national interest.