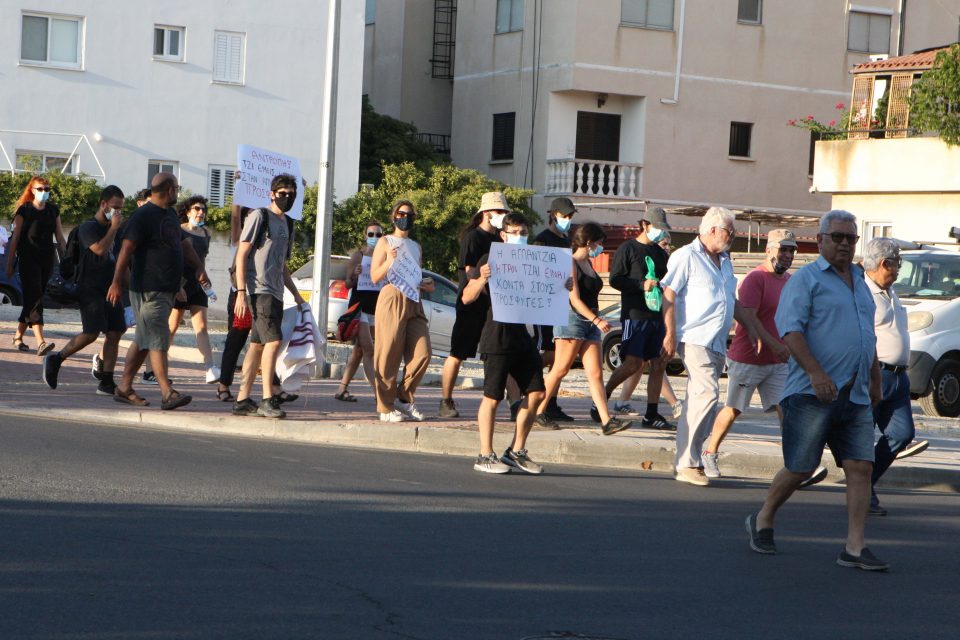 The demo on Wednesday night in favour of the centre (Photo: Christos Theodorides)

A centre for vulnerable asylum seekers in Aglandjia in Nicosia has government approval to run and will go ahead despite reactions from residents and mayoral candidates, the head of the consortium of non-governmental organisations (NGOs) running the project Nicos Peristianis said on Friday.

Peristianis told the Cyprus Mail the centre, at the Palladium building, will be run by the NGOs, Hope for Children, Universitas Foundation, which he heads, and the Doctors of Cyprus, and that for the operation of the centre, they had won a government tender.

Commenting on protests from residents about the centre, Peristianis said it appeared they were not well informed on what the centre was about.

Specifically, the project has been approved by the state with EU funding. Peristianis said the centre would be receiving 90 per cent of its funding from the EU and the other ten per cent from the government.

Issues raised over the building not being licensed were also refuted by Peristianis, who said the centre was a registered psychiatric institution and will be providing similar services to vulnerable groups staying there.

Single parents, children without parents, pregnant women, and abused women will all be allowed to stay at the centre for a limited time, Peristianis said.

These groups will be given support, attend classes, and receive psychological help to help them integrate into society.  Also, their stays will be limited at the centre for up to four months.

Palladium will be able to host forty people at a time, and the people sent to the centre will all be sent by the social welfare services and the asylum services of the government, he said.

However, some residents have been protesting this government decision.

The head of the Aglandjia Residents Initiative Group, Eleni Konteati said: “We are not racist, but we don’t want a guesthouse for asylum seekers.”

She added the residents will feel “terribly insecure” if the centre runs in the area.

Another resident, who chose to remain anonymous, told the Cyprus Mail the people were not fully informed and did not know that it was not a centre not for illegal migrants but vulnerable groups of people.

On Thursday four of the five mayoral candidates, who are running for election on August 2, also condemned the plans to operate the centre.

Only, the Green Party candidate Efi Xanthou came out in support of the centre saying she has ‘no problem’ with an asylum centre operating wherever in Cyprus.

On Wednesday, the Aglandjia Residents Initiative Group said in a statement that they had not been consulted, and urged the authorities to reconsider.

An official at the municipality said that the building – an old clinic – does not have the necessary licence to host or house asylum seekers and an application has not been made by the NGO in question.

A protest meeting against operating the centre was attended by members of the far-right Elam party, including the head Christos Christou, and some Disy MPs and some mayoral candidates.

Another group of Aglandjia residents, held a counter demo to protest against those who do not want the building turned into a centre for refugees.

Protesters held posters saying, “Shame on you, we too came to Aglandjia as refugees,” and “Aglandjia, was and is close to refugees.”

Migrant support NGO Kisa said later on Friday that when the representative of the Aglandjia Residents Initiative Group states that the “hospitality centre for vulnerable asylum seekers” should not operate at Plati because the building is adjacent to the Athalassa Park which is very important for the national security of the whole of Cyprus, “it is obvious that these cannot be the products of rational thinking but emanate from purely xenophobic and racist positions that distort reality”.

It said the centre would host around 50 vulnerable asylum seekers, such as children, particularly unaccompanied children, people with disabilities, the elderly, pregnant women, single-parent families with minor children, victims of human trafficking, people with serious illnesses, psychological disorders and who have suffered torture, rape or other serious forms of psychological, physical or sexual violence such as victims of female genital mutilation.

Most beautiful sceneries in the world – part 1 | 360 VR video