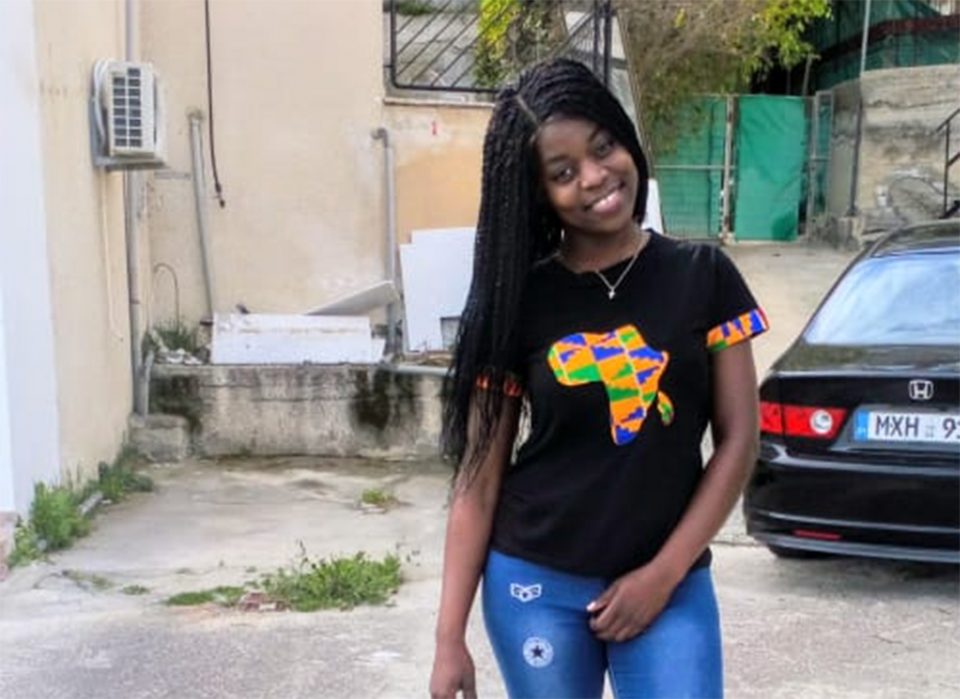 As I write this I’m wearing a brand new, white T-shirt with a prominent strip of colourful African material across its chest, and a diamond of the same fabric on each sleeve. And it’s perhaps the only T-shirt I own that has such a powerful message incorporated into its design.

“The story behind this one has to do with the way refugees are purveyed in a negative light. Most of the time, refugees are labelled as dirty, lazy, violent… So the strips of material translate the displeasing labels that are attributed to refugees,” Leatitia explains as she had hands me my new T-shirt; one of the many designs from her Aphrogee collection launched late June.

Born in Cameroon’s Douala, Leatitia Tchakoute arrived in Cyprus as an asylum seeker in 2017. Now a recognised refugee and a bachelor student of Oil and Gas Engineering at the University of Nicosia, it’s her own life experiences and dedication to uplifting the local African community that has preoccupied a fair amount of her free time and energy over the years, and has led to the creation of Aphrogee.

“Everything started with personal coaching, I was troubled with some of the mannerisms of Africans and I wanted to fix this with dialogue, communicate and show them what they’re doing, help them react better to situations… I asked them what they were doing with their lives as they waited for their papers; I asked them what they wanted to do with their lives… the more I spoke to refugees, the more I understood that they had needs that could be calmed down,” Leatitia adds.

It’s through addressing and eventually communicating these needs to her wider circle that Leatitia eventually built a network of people who gave her donations to share within her community. “When I was doing plaits and clients came to my home, I would explain what I was doing, and eventually people would bring me money, food, clothes, milk… I would call people from my community and ask them to look for people that are going through hard times… I would go and visit women that I didn’t know purposely because I didn’t want it to be as if it was me going to give a present to a friend. I would bring things, food, I would go to hospitals, when women were giving birth, we would surprise them. Sometimes I would organise for hairdressers to have a free day so that women could look after themselves a little, see themselves looking beautiful… this is how this idea came to create the African Association of Cyprus; because demands were too big”.

This was how her involvement in Project Phoenix developed. Project Phoenix is a European NGO and social enterprise dedicated to supporting and empowering migrants through innovative approaches and advocacy. Currently running a pilot project in Cyprus, Leatitia is one of five people currently participating in Project Phoenix’s programme.

Considering that Cyprus has the highest rate of asylum seekers and refugees per capita in Europe, “Cyprus is one of the missing stories in the whole picture”, says Hrishabh Sandilya, Director for Partnerships and Development of Project Phoenix, “there’s a lot of focus on Greece and Italy… and we began the fellowship programme in Cyprus in October, when we started identifying fellows to join the programme”.

They focus on working with individuals from refugee, migrant and asylum seeking backgrounds “to empower them through entrepreneurship,” says Hrishabh. “Leatitia impressed me right off the bat; she was just so determined and focused on what she wanted to do”.

Initially, Leatitia approached Project Phoenix with two ideas; building the African Association of Cyprus and the T-shirt and fashion clothing design business. “The African Association is more of a voluntary project,” explains Hrishabh, “that’s gone a little bit on the back burner because of delays and Covid; we didn’t manage to get everyone together and it’s a complicated process but it’s definitely still in the back of her mind,” he reveals. But the T-shirt and clothing design business is up and running.

Aphrogee, which is a combination of the words ‘Aphrodite’ and ‘refugee’ and used to highlight the cultural beauty that refugees can bring to Cyprus, showcases unique T-shirt designs inspired by Africa and made in Cyprus, designed by Leatitia herself who is supported by African artisans and craftsmen.

“I started the project with a small sum,” says Leatitia. “I first started wearing a T-shirt myself, I liked it; people started asking about it. I first wrote the stories I wanted to tell and then I designed the T-shirts and I thought about how I could adapt the T-shirts to each story; what I could add to the T-shirt to reference what I was saying… all the stories are inspired from the coaching I have been doing but also from what I hear,” she adds.

“And so, every T-shirt design has a different story,” says Leatitia. “We use the T-shirts to tell the feelings and accounts of refugees. We African refugees have a culture, we have beautiful things to offer, whether this be intellectually or artistically; this is what we want to put out there… I know Cypriots like fashion and maybe this will make them think: hey, refugees are saying something which isn’t ‘I want to eat’ or ‘I want my coupons’. The T-shirts tell a different story, I believe that if these stories are heard, the lives of refugees will change. And that’s what’s important, that things change.” 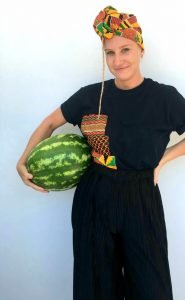 And so what stories do these T-shirts tell? “There’s a T-shirt about stories that have happened to refugees, about leaving our homes, about the fact that even though we smile, we’re still hurting inside; there’s a story/T-shirt about refugees always being blocked by something, this one has strips of African materials everywhere because we always find walls in front of us. There’s a design where the sleeves are dressed in African material with a pocket in the same material. The material, first of all, comes from a foreign country, this translates the fact that we are here, in Europe, in a foreign country, and we had to leave our work, our companions and those who fed us in order to survive and that’s brave; there’s no shame in being a refugee… As refugees, we’re used to having to work hard to live. When we leave our countries we lose our ability to be financially stable: employment is not guaranteed, and certainly not easy to find in our new countries. The original sleeves of the T-shirt are replaced by the wax pattern, symbolising sleeves rolled up to work. The pocket in front represents the money that we earn through this work,” explains Leatitia.

Commenting on Aphrogee’s trajectory so far, Hrishabh says: “Our fellows are at different levels and different stages in their lives, some are younger, some are older, some have different experiences, some have experienced trauma, no one fellow has the same background, the same needs. What we try and do is a very customised, tailor-made approach, we work with people individually, see what it is they want and help them. With Leatitia I didn’t do that much because she’s really eager, capable and intelligent, she has pretty much everything that someone would need to become an entrepreneur and so our role was more emotional and social support than actually transferring skills – she already had the skills, it was more about activating them,” he adds.

“With other fellows who are asylum seekers for example, we do something different, we focus more on professional and skills training and preparing them for the time for when and if they become recognised refugees or attain an international protection status; then we can help them open their businesses. The whole idea of recognising their agency, complementing and supporting their agency at every stage and never taking away their narrative, that’s our approach,” says Hrishabh.

Describing himself as a privileged migrant, Hrishabh attests to Project Phoenix’s approach. “I can never say that I speak for them (refugees and asylum seekers) but I can say that I understand their challenges of setting up in a new country and if we can alleviate those challenges and make it a little easier for them to do what they need to do without interfering in their lives too much [that’s great].”

While Leatitia awaits to take the next steps to potentially found the Cyprus African Association, Aphrogee has moved to the fore, and part of the profits are used to support her community. “By working hard to express who we are,” concludes Leatitia, “maybe we can take this opportunity to wake up and show something beautiful; sow our seeds through responsibility.”

Project Phoenix also works with legacy institutions such as Caritas, hopefully government bodies and other NGOs who either can’t manage something alone or just need some additional support, explains Hrishabh “and we help them with innovative things that we come up with”, says Hrishabh. The most recent example is an innovative approach with volunteer English teachers in India teaching online English classes to refugees in Larnaca, which is now continuing as one-on-one sessions.

Project Phoenix also indulges in advocacy through pushing for systemic change. “We’ve just begun a research project on the impact of Covid on migrants and refugees in Cyprus and this is going to be done with a bunch of interesting researchers based on the ground in Cyprus as well as the US, with some UN consultants coming in,” he adds.

In the long run Project Phoenix aims to work with NGOs in advocacy element, supporting its fellows and expanding across the region, potentially going to Syria and Lebanon when reconstruction efforts begin, “but in the long run we do want to set up a hybrid social enterprise mode where we are able to use profit from the social enterprise to fund the other operations,” Hrishabh concludes.

Are you an overthinker? How to get out of your head

The joys and trials of an animal lover

Pink pouts are trending: how to find your summer shade