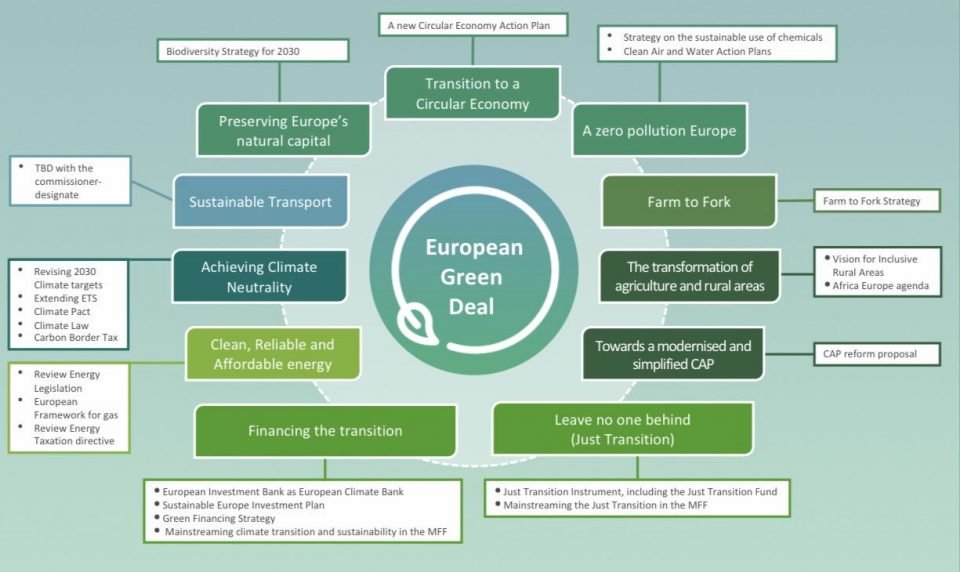 THE announcement by Ursula Von Der Leyen the ‘European Green Deal’ faced immediate skepticism across the continent. Most observers thought it was one of those fancy titles coming from the ‘Brussels Bubble’ with little content and even less practical action.

However, only a few months after the inauguration of the Von Der Leyen Commission, the Green Deal is anything but empty words. It presents all-new proposals, legislation and actions by the European Union and seems that it will indeed become the anthem in the EU in the coming five years. Those following European affairs, agree that the Green Deal approach shapes political decisions, influencing the way the European Commission, member-states governments and businesses manage their affairs.

As the effects of climate change become more and more visible, the EU Commission considers it a priority to build a climate neutral continent. The Green deal, following the goals of the Paris Agreement provides for the political and financial impetus that can lead Europe through a climate friendly transition.

It is a “strategic agenda” of the European Union to adapt to a greener way of life through promoting the interests of society, citizens and businesses. The Green Deal aims to deliver prosperity through a cleaner future for the continent, and not only. But most of all, the European Commission boasts that it can be a huge opportunity for EU businesses to come to the forefront of green innovation and investment in order to dominate the next two decades in Europe and all over the world, becoming a global leader in a Green economy.

The Commission considers that the transition to a sustainable, carbon-neutral and resource-efficient economy requires fundamental changes to our society and economy. Those changes will contain opportunities but also risks. The European Union through the Green Deal will boost those economic sectors that can deliver the transition but also protect the most vulnerable groups and the most disadvantaged regions that will need special consideration as the transition happens. Huge funding will be mobilised to enhance the transition, accompany the changes and help individuals and businesses to adjust to the new world ahead.  On this direction, the European Green Deal Investment Plan is striving to attract at least one trillion euros worth of public and private investment over the next decade on Green investments.

To do so, the EU will provide tools to unlock private and public investment by putting sustainable finance at the heart of the financial system and encouraging green budgeting and procurement by public authorities through approvals of state aid. As designing and planning this project will be complex thousands of experts will be used by the EU to search for new solutions and provide support both to public authorities and project promoters.

A very concrete example of a “Green Deal” approach in EU project financing is the recent Decision (November 2019 of the Board of Directors of the European Investment Bank (EIB), the world’s largest multilateral financial institution, whose shareholders are the 28 member states of the EU and acts as the principal lender of all the mega infrastructure projects to end financing for fossil fuel energy projects from the end of 2021. This decision will make the EIB the world’s first ‘climate bank’. EIB future financing will accelerate clean energy innovation, energy efficiency, solar and wind power. The change is significant: The EIB has funded approximately 13,4 billion to fossil fuel projects only between 2013-2017.

In Greece, the new government rushed to announce in the end of 2019 the shutdown of all but one coal (lignite) power plants providing for 25 per cent of Greece’ installed capacity by 2023, only one plant surviving until 2028. To achieve this and reconvert the three regions whose whole economy depend heavily on those plants, Greece is willing to inject almost 4.5 billion euros the majority of which through direct EU funding and EIB loans in the next 10 years.

Cyprus has also realised recently the power of the Green Deal.  The government announced in early February that the island had to increase the price of gas in order to comply with Directive 2018/2001 on the promotion of the use of energy from renewable sources. The national target set is the increased use of renewable energy sources from 2.9 per cent in 2005 to 13 per cent by January 2020. For transportation the goal was to reach the 10 per cent of renewable energy in the most effective way. According to the Ministry of Energy, Commerce and Industry the goal was to blend biofuels into fuels, which automatically increases the price of petrol by 2 to 2.5 cents per litre.

And more is to come soon. The Commission will present a new “climate law” by March 2021, reviewing each and every EU Directive and Regulation in order to align them with the new climate goals. Renewable Energy Directive, Energy Efficiency Directive, Emission Trading Directive, as well as “LULUCF Regulation” on the inclusion of greenhouse gas emissions and removals from land use, land use change and forestry, will be submitted immediately as part of this package.

The Green Deal is therefore already happening near you and affects government policies, business behaviour and definitively, daily life all over the continent. Businesses have to seriously take measures to cope with this new reality in their everyday processes but especially when tackling strategic decisions about their future. Once the financial instruments are ready, the transformation of the EU business environment towards a greener future will accelerate.

Trump visits Kenosha, not to urge racial healing but to back police

An ‘Epic’ battle over Fortnite