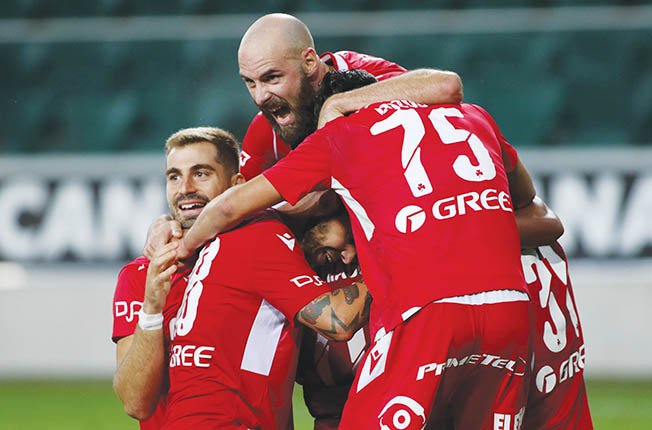 Omonia beat Legia Warsaw in Poland in the previous round

Cypriot club Omonia take on Serbian side Red Star Belgrade in the Champions League third qualifying round on Wednesday, with the one-off game kicking-off at 6 PM at the GSP Stadium in Nicosia.

Serbian journalists have noted that the kick-off time, which was suggested by the host team and was not contested by UEFA, is the earliest possible under UEFA’s rules. The earlier start will undoubtedly result in a game played in considerable heat, reportedly around 31 degrees celsius. There have been insinuations that Omonia feel that this will give them a slight advantage as the Cypriot club are more accustomed to playing in such conditions.

In his pre-match press conference, Omonia manager Henning Berg said that the team is looking forward to the game. “It is a challenge for us”, said the Norwegian. “Red Star are a strong side, but that’s why we are here, to face strong sides”, he added.

On the current condition of his squad, Berg expressed his general satisfaction with how things are at the moment. “I’m very happy with the players, with their dedication, quality and effort”, he said.

“The progress that has taken place since last year is super, it took a lot of work to get here”, Berg said, before adding that “we are not the favourites but we will give it our all”.

On any potential weakness Berg may have spotted during his scouting of Red Star, the Norwegian was blunt. “I did not identify any weakness”, he said.

Berg went on to say that he views Red Star as a collective and not in terms of individual difference-makers. “We have analysed our opponent, we know quite a lot about them. They have good players, but they are also good collectively, not just individually. They have players who can make the difference. We are focusing on how they perform as a team”, Berg said.

On whether he has decided on his starting eleven, Berg was humorous. “I hope so, unless I change my mind”, he said smiling.

Answering a question on whether the high temperature will hinder the visitors, Berg remained tactful. “I don’t know, I can’t say how much difference there is between Nicosia and Belgrade”, he said. “But these are the facts and we will have to do the best we can”, he added.

Finally, Berg also said that the “key to the game is for us to be very good defensively and stay organised”, adding that “if we don’t’ defend well we will not be able to qualify”.

Meanwhile, Red Star manager Dejan Stankovic has provided some updates on the squad available to him as well as his outlook on the game. “Ben and Katai are 100% ready”, Stankovic said. “Gobeljic and Rodic feel good, but I have two more days to decide my starting eleven”, he added.

Stankovic said that this the most important game of the season for them, before alluding to some adjustment to his tactics. “We want to play good and attacking football, however, as far as Wednesday is concerned, we will be patient, but that doesn’t mean we will be defensive”, he said.

On whether he has studied Omonia, Stankovic was affirmative. “They had to rotate because they competed both in Europe and in Cyprus”, he said. “They played well in the first half against Anorthosis but had some problems in the second half.

“They have experienced players, they don’t rush their game and wait for the opponent to slip up, so we will try to minimise our mistakes”, he concluded.

Red Star have a number of players who can damage Omonia, including the aforementioned Ben Nabouhane and Aleksandar Katai, but also midfielder Mirko Ivanic. The trio have contributed ten goals between them to Red Star’s total this season across all competitions.

In more detail, Katai has scored four goals and assisted three, helping Red Star to top the table in Serbia with seven wins out of seven games played. Interestingly, the Serbian scored his four goals from an expected goals figure of 1.48 xG. Looking at the goals he scored this season, we can see why this is the case.

For example, his second goal against Backa Topola came from a shot outside of the box, on the right-hand side, with five opponents technically in front of him and another opponent within a few years to his left. This goal carries a low degree of probability. Further, his other two goals against the same team were cut-backs from team-mates, but also involved a number of opponents ahead of him, which ups the difficulty. While the set-up in both cases helped Katai, he still needed to finish the opportunity given to him.

On a collective level, Red Star have the second-highest number of touches in the penalty area in the Serbian first division, both in terms of total touches and touches per 90 minutes.

They also have the highest number of shots per 90 minutes with the fourth-highest on-target percentage, as well as the league’s highest average ball possession with 66.5 percent.

Finally, and more worryingly for Omonia, they have the league’s fifth-lowest Passes Allowed Per Defensive Action (PPDA) figure. This particular metric points to how aggressive and how high a team’s pressing is, taking into account a number of factors, including passes made by the opposition in the attacking third, as well as the total number of defensive actions during that time. A low PPDA number, like Red Star have here, means that Omonia must be cautious when in possession as Red Star have the ability to win the ball back high up the pitch and initiate a counter-attack.